Dining across the divide: ‘He was incredibly inconsistent in his views’ 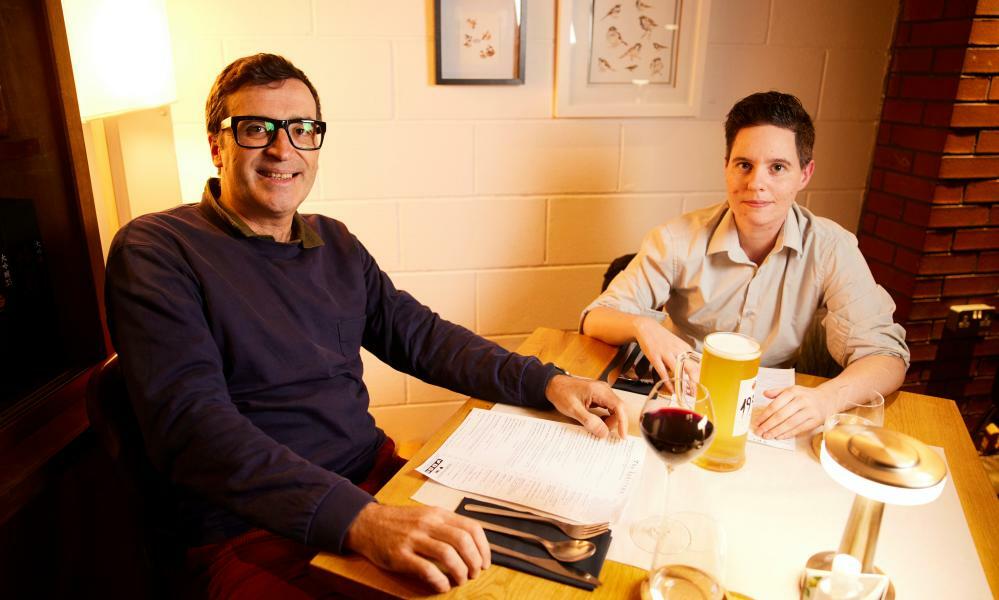 Occupation Site reliability engineer
Voting record Labour in every general and local election since he started voting, except one vote for the Lib Dems, later regretted
Amuse bouche Can recite the first 30 digits of pi

Occupation Brand consultant. Martin previously founded and ran a brand and design business
Voting record Has always been a Labour voter, but has considered himself politically homeless since 2017
Amuse bouche Served on the board of “Britain’s boldest orchestra”

Martin I knew I was meeting a trans person. I was concerned that it would be someone who wanted to educate me or be aggressive. I didn’t expect that but I worried about it. Both of us really positively and warmly went out of our way to establish that we were going to be OK together and have a nice evening.

Torran We talked at the start about finding common ground, and he said he wanted to disagree well and be respectful. Honestly, the food was incredible.

Martin It was a new take on Mittel Europe cuisine.

Torran I had spätzle, which are solid pasta tubes.

Martin I had some interesting dumplings.

Martin I was really straight. I said: “I believe that a trans man is a biological female.” My view is she’s a biological woman who’s living her life as a trans man. We didn’t talk about pronouns because when you’re having a conversation with someone, you don’t need to.

Torran No one is more aware of biological sex than trans people. It’s an absurd idea that we’re trying to ignore it. It’s defined a lot of our lives. You don’t, when you meet someone, do a DNA swab and check their chromosomes – we base things on instincts and on what people look like. If you want to delve into genotype [the set of genes in DNA responsible for a particular trait] and phenotype [the physical expression of that trait], then if someone’s phenotypically female, they’re female, regardless of what they’ve got in their pants, which you can’t see anyway.

Martin It was like going in to debate about the royal family with someone who’s a member of the royal family. I think sex is immutable. And my fear is that you’re not allowed to say that, and it makes me automatically a terrorist, a bigot, a phobic, unworthy of keeping my job.

Torran Whenever I brought up a fact that contradicted him or a study that I knew about or information that he didn’t have, he’d say: “I don’t have that to hand – I’ll never be as well informed as you on this because it’s your life.” At one point, I pulled out my phone to show him what the Equality and Human Rights Commission says – that people should be treated as the gender they’re transitioning to at any stage in the transition. Then he hared off in a different direction entirely.

Martin Facts and truth are really problematic. Everybody’s got their own version of science. There is no incontrovertible truth. Everybody must identify as they wish, everybody must be supported. But this is a space where truth and immutable biology aren’t accepted. And I find that really depressing.

Torran He was incredibly inconsistent in his views.

Martin We agreed completely on wealth redistribution. If it is true that the next generation is going to be the first that’s poorer than the one that came before, then my generation absolutely has the responsibility to sort that out. Torran’s view was to do it all through inheritance tax.

Martin I think the Labour party is currently unelectable, and I think Torran agrees.

Martin Tor was far more reasonable than I was expecting. We had far more in common than I expected, both within and besides the trans thing, notwithstanding the central ideological difference. I think it might have been interesting if a really gender critical feminist and someone more extreme than Tor had got together. I don’t think their conversation would have been anything like ours.

Torran He described believing in gender identity as a religion. You hear this a lot – “it’s a belief system”. The logical conclusion of that is that there’s no basis for the belief. Trans people aren’t real. At the end of it, I was annoyed. And tired. He drove off and I wandered off to the pub. I won’t say he drove me to drink but it came pretty close.

Want to meet someone from across the divide? Click here to find out more