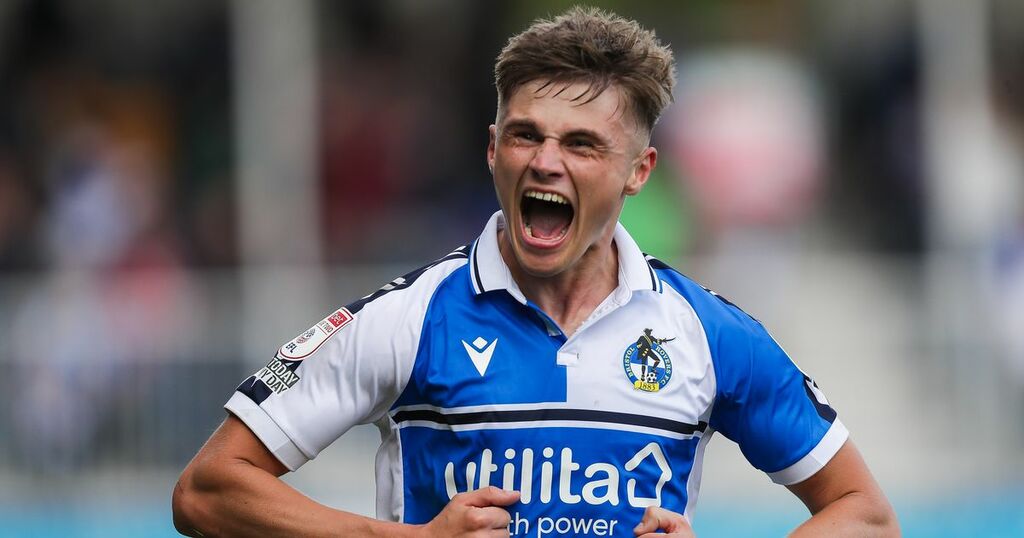 Harvey Saunders was thankful to Joey Barton for allowing him “on the pitch to right my wrongs” following his goal in the much-needed victory over Carlisle United on Saturday at the Mem.

Antony Evans, Sam Nicholson and Saunders all found the back of the net on Saturday afternoon as the Gas lifted the mood around BS7 with a deserved three points to ease some pressure on manager Barton.

Saunders’ contributions in blue and white quarters were vital to the result, with his pace and engine were a huge part of Rovers success against Carlisle and his goal topped off a tireless performance.

Through injuries in certain areas of the pitch, the 24-year-old had been forced to play at wing-back against Crawley and Hartlepool in September, with his mistake against the latter costing the Gas three points.

However, since that defeat, Saunders has worked his way back into the starting XI in a more familiar forward role and Barton’s re-enforced message of positivity around the club has allowed him to reap the rewards with his third goal of the season in all competitions.

“I was devastated after the (Hartlepool) game,” Saunders said. “I went home and I was just devastated, but they’ve put trust back in me to put me back on the pitch and make me right my wrongs.

“I saw the clock ticking down and you’re thinking it’s not going to be the day and then it falls to me. Luke Thomas has put a brilliant ball in and it’s just relief to put it in the back of the net.

“The whole week has just been positive. The gaffer has been positive along with everyone in the club and he said to us that we’ve had a really positive week and that we want to finish it strong and I think we did that.

“There’s not been a negative thing going on. So, when you’re going into a game and you’re full of confidence and everyone’s happy, you perform like that.”

Although Rovers appeared comfortable winners via the scoreline, the game was hanging in the balance until Nicholson’s composed finish in the 86th minute.

However, a crucial difference from last weekend against Swindon was that the Pirates still had some attacking impetus in the game and Saunders believed that with the players the Gas had in forward areas, they could still continue to attack with endeavour whilst holding their lead.

“We said at half-time we can’t just rely on that 1-0 lead,” he added. “If we sit back and invite the pressure it’s not going to do any good for us. We knew with the team we had today that we needed to press and we needed to go from the front and we did that.

“You can never rely on a 1-0 especially not in this league, you never know what’s going to happen. We’ve got to go out and really attack and I think we did that.”

Another of the deciding factors in the end was the strength of the Rovers bench with both Luke Thomas and Nicholson coming on and having a significant impact in the second-half.

With the two attacking players returning given minutes and Nick Anderton needed to replace the injured Junior Brown it meant the only fit natural striker at the club, Brett Pitman, was an unused substitute in the triumph over Chris Beech’s side.

The 33-year-old has an obvious level of nous in the attacking third, but has struggled to have any impact in recent games resulting in Barton opting for a more energetic option in Saunders to lead the line.

Goals were never a major part of Saunders’ game but he has shown he clearly has an eye for goal this season and when asked whether he could be the man to score the important goals for Rovers, he answered with real confidence alongside praising his teammates.

“Yeah, definitely when there’s players like Sammy Nich, Luke Thomas and Antony Evans around me,” Saunders said. “Even Paul Coutts and Glenn Whelan further back, they’ll find the passes as long as I’m making those runs.

“Luke Thomas and Sam Nicholson were brilliant when they came on and we finished the game strong. We need to go on a run now, the lads know that and we’re all pushing for that and we feel it’s coming.”