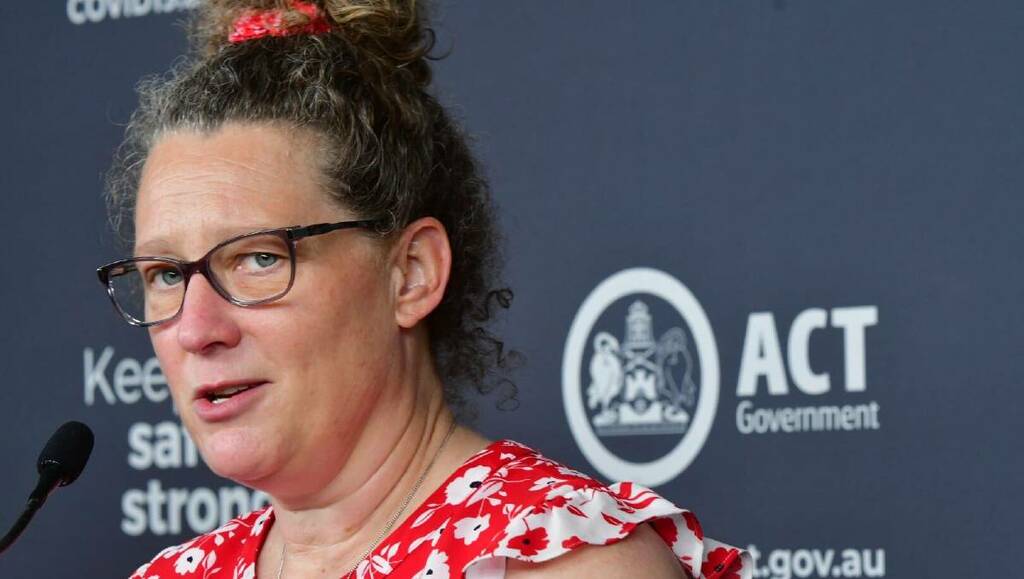 A detainee at the Alexander Maconochie Centre has tested positive for COVID-19, the ACT's chief health officer confirmed.

Dr Kerryn Coleman said there were good operational plans in place to respond to the case, which she understood to be a detainee on transfer into the facility.

"We know that it's a vulnerable community and a high-risk setting. As per all our high-risk and vulnerable settings, we have some really good operational plans in place," Dr Coleman said.

"This morning, that's exactly what we're working through. We're working with all the people involved, we're collecting all of the information and we will go through doing what we need to do."

The notification of the positive case came through after Friday's cut off for case reporting, meaning it will be counted in Sunday's numbers.

The person who tested positive was arrested by ACT police on Thursday, an ACT Policing spokesperson said.

"The ACT Policing COVID-19 Taskforce has identified all officers who interacted with the person and they are now receiving support from AFP Organisational Health," the spokesperson said.

"All ACT Policing officers are required to wear [personal protective equipment] when interacting with the community to reduce the risk of spread of COVID-19."

The spokesperson said ACT Policing was conducting deep cleans of the areas the person had been, and taking steps to ensure the ongoing safety of the ACT watch house.

Dr Coleman said everyone who had been affected by the case would be contacted by health authorities.

Winnunga Nimmityjah Aboriginal Health and Community Services chief executive Julie Tongs said she feared the worst for the Canberra prison population if the detainee had gone into the general population for any length of time.

Ms Tongs said she received a text message from Corrections Commissioner Ray Johnson early on Saturday advising her of the positive case at the prison but details were still "sketchy".

"This is a very troubling development and I'm really, really worried for the detainees out there [at the prison]," Ms Tongs said.

"I know our [detainee] clients are fully vaccinated but they [ACT Corrections] are not letting anyone know about the vaccination status of the general prison population.

"My information is that vaccination rates are very low and that only 25 doses a fortnight were being offered [to prisoners].

"If that's the case, this could very quickly turn into an outbreak like Parklea [prison].

"There is a lot of very vulnerable people out there, in poor physical health, and if it's in the general prison community, the virus could quite easily kill some of them [inmates]."

The outbreak within Parklea, a private prison in Sydney's north-west has escalated to 169 cases, including 141 inmates. It has been in lockdown for weeks.

Most inmates who have tested positive are described as asymptomatic and are being treated on site.

Strict COVID-19 protection protocols were promptly enacted by the Winnunga health service, which provides support to indigenous detainees at the Alexander Maconochie Centre, as soon as the lockdown was announced in early August.

All her operational health staff were fully vaccinated.

"The big issue with the prison has always been the lack of transparency and in health emergencies like this, that makes for a very troubling situation for friends and family of the prisoners," she said.

More than 60 per cent of detainees at the prison had received their first dose of a COVID vaccination by August 24, while 55 per cent had received two doses.

All jail staff have been eligible for a vaccination since March 22.

Dr Coleman on Saturday said it was difficult to provide an updated figure due to the high turnover in the prison population.

"As for many of our higher-risk community and cohort groups, we have been providing vaccination where we can, and there has been an inreach program at the Alexander Maconochie Centre," she said.

Detainees who arrive at the prison are offered a vaccination if they have not already received it, however vaccinations are not mandatory.

The ACT Inspector of Correctional Services has also found that physical health of inmates is also poorer that than of the general population, and 66 per cent of the inmates smoke.

Under COVID outbreak emergency protocols at Canberra's prison, the detection of a positive case would immediately suspend all travel and transfers.

Corrections said any infected detainee "would be isolated and managed within the AMC, subject to health advice, unless their clinical situation warranted admission to hospital".

Face-to-face visits at the prison were suspended when Canberra was locked down on August 12.

The suspension of face-to-face visits to the jail last year created an opportunity for some inmates to apply for bail, as the ban was a significant change in circumstances.