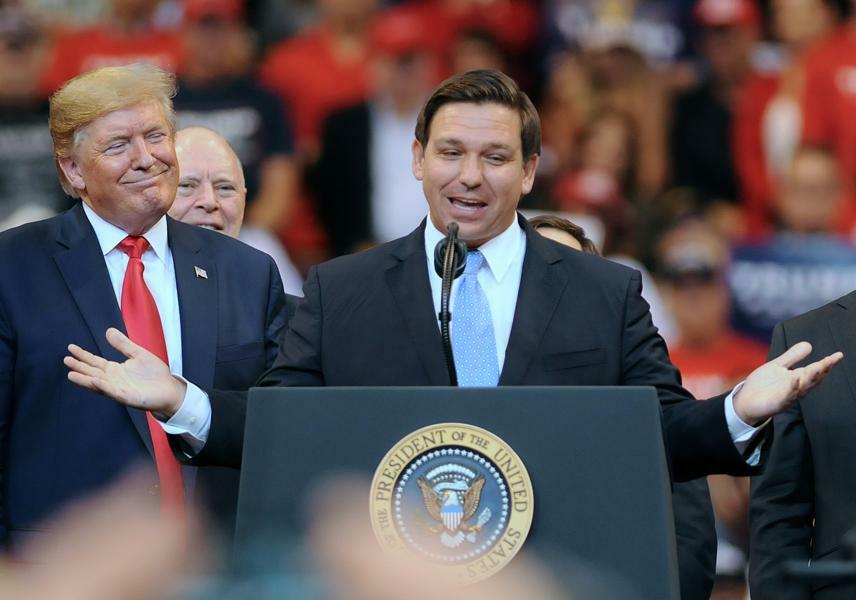 Florida Gov. Ron DeSantis (R) said on a podcast episode that aired Friday one of his biggest regrets in office was not speaking "much louder" against the Trump Administration's calls for lockdowns in the early days of the pandemic, with the comments coming just days after former President Donald Trump appeared to label DeSantis "gutless."

DeSantis said on the conservative podcast "Ruthless" he believes Trump Administration officials like Dr. Anthony Fauci "panicked" as Covid-19 quickly spread around the U.S. in March of 2020, leading to calls for lockdowns.

Tensions are reportedly growing between Trump and DeSantis, who was one of Trump's most vocal and powerful supporters during his presidency, over DeSantis not ruling out a 2024 presidential run if Trump is also in the race.

Trump said in an interview that aired Tuesday that politicians who don't disclose whether they've received a Covid vaccine booster shot are "gutless," appearing to take a jab at DeSantis, who's refused to say whether he's received a booster.

If DeSantis was opposed to lockdowns in the early days of the pandemic, that view was not reflected in his actions. In March 2020, DeSantis ordered schools to shut down, closed down bars and prohibited indoor dining at restaurants, like many other governors did. But some of Florida's restrictions went far beyond that of many other states and the guidance issued by the federal government, such as requiring travelers from New York, New Jersey, Connecticut and Louisiana to self-isolate for two weeks after entering the state. DeSantis even ordered police checkpoints to be set up on interstates to monitor travelers coming into Florida. Restrictions for New York area travelers were not lifted until August 2020.

DeSantis' initially tough lockdown measures, for the most part, did not last long. In late September 2020, Florida lifted capacity restrictions for restaurants and bars far earlier than any other large state, allowing the businesses to operate at 100% capacity. DeSantis repeatedly touted his state's lax restrictions, and the fact he never put a statewide mask mandate in place, leading to a rise in name recognition and popularity among Republican voters as the party's Trump-supporting base became increasingly opposed to Covid restrictions. Media and political pundits have regularly floated DeSantis as the potential GOP nominee in the 2024 presidential race, and early polling shows DeSantis a strong contender to take the nomination—if Trump doesn't run. But a December Reuters/Ipsos poll showed DeSantis running a "distant second" if Trump does enter the race. The poll found Trump with 54% support among potential GOP primary voters, while DeSantis only polled at 11%.

DeSantis is running for reelection this year. Polling shows him with a lead over either of the Democrats he's likely to face in the general election.