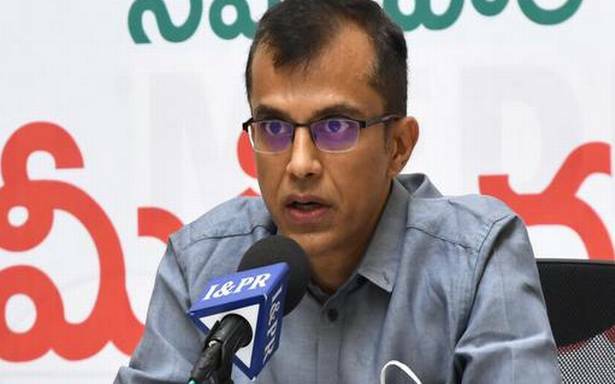 Energy Secretary N. Srikant on Saturday said the power sector was going through a turbulent phase due to a 20% increase in consumption and a fall in thermal generation on account of depleting coal stocks.

Coal reserves had come down substantially due to global shortages in the last one month. Of the 135 thermal power plants in the country, 108 faced a severe shortage. Coal stocks in 28 plants would barely last for a day as per the Coal Ministry data, he said at a press conference here.

Mr. Srikant said India imported a substantial chunk of the coal from Indonesia, which was charging $162 per tonne as against $86.68 in April 2021. This obviously had a major impact on the power sector in the State.

“Thermal power plants in the State had 40,000 tonnes of coal as on Saturday. It was 24,000 tonnes towards the fag end of September. Their combined daily coal requirement is 70,000 tonnes per day. Adequate coal stocks have to be maintained from October to January in order to be prepared for the coming summer,” he said, while appealing to consumers to curtail the usage of heavy duty appliances such as air-conditioners between 6 a.m. and 9 a.m. and 6 p.m. and 10 p.m. till the crisis has passed.

Mr. Srikant pointed out that 45% of the demand (nearly 80 MU) was being met by the AP-Genco plants and since one of them is not functional, generation had come down by 50%. The output of Central generating stations was not more than 75% (it is below 30 MU) against their 40 MU capacity due to the crisis that is looming on the national power sector.

He said a maximum hydel generation of 25 MU could be achieved and the daily availability of solar power was 15 MU. While there was potential for a generation of 30 MU of wind energy, the actuals were hovering between 5 MU and 10 MU.

Due to the steep fall in power generation, the State was forced to buy from the open market (exchanges) at rates three to four times higher than the normal ones. The present average rate was a whopping ₹15-a-unit. But, even the exchanges had little power to offer due to the crisis.

He said the average daily consumption of power stood at 190 MU in October 2021 compared to 160 MU in the corresponding month last year.