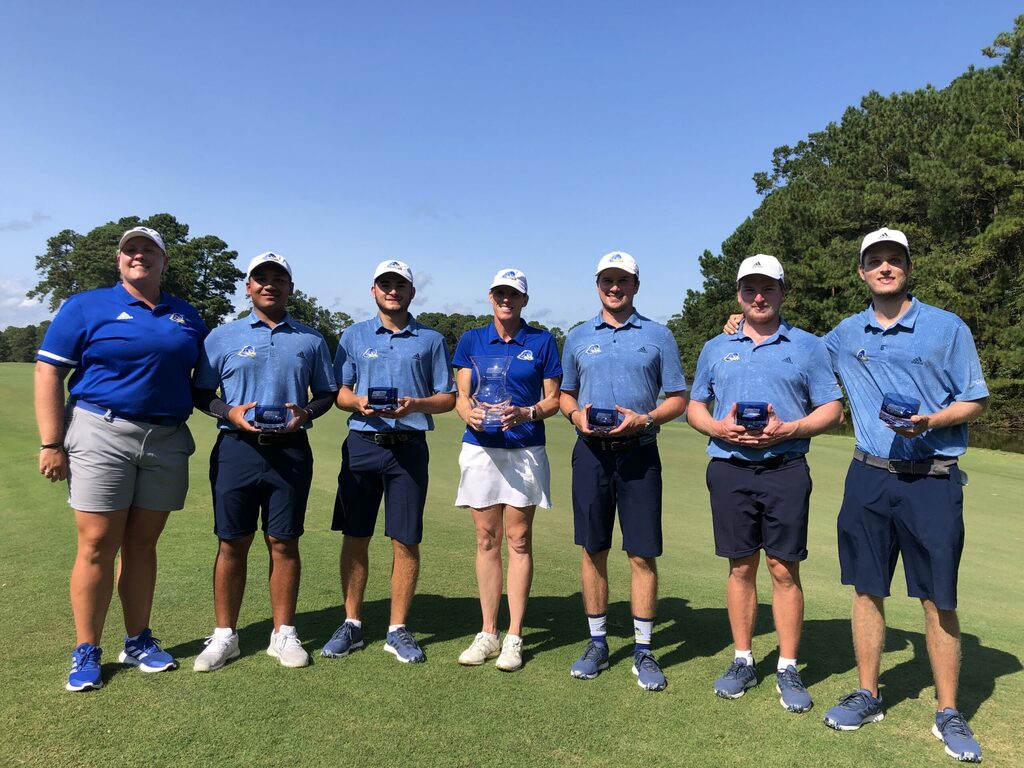 Before Delaware teed off in the final round of its season opener on Tuesday, head coach Patty Post dredged up a pre-COVID memory. Playing in the Loyola Intercollegiate in February 2020, before the spring season was shut down in light of the pandemic, Delaware posted a school-record round of 21 under.

“I said this is probably the best course for you guys after that one,” Post said of revisiting that round at True Blue Golf Club in Myrtle Beach on Tuesday. “It was not a big speech, it was not bringing everybody together.”

At the time, Mercer’s lead at the Golfweek Fall Challenge looked insurmountable. The Bears had played the first 36 holes in 29 under and Delaware was trailing them by 17 shots.

Delaware’s four counters contributed three birdies on True Blue’s first hole and the chase began. Ultimately, the Blue Hens went 18 under in the final round as Mercer cooled off to play that round in even par. That gave Delaware the one-shot victory at 30 under.

Post made sure to plant herself at the closing gauntlet, and Delaware’s counters skated through No. 16 with three pars and a bogey and posted four pars at No. 17.

Players input their own scores during the tournament, so the standings were no secret.

“They’re seeing it,” Post said of the run her team was making. “You don’t want them to but they are.”

By the time Delaware’s No. 1 player Roberto Nieves reached the 18th hole, the Blue Hens had a one-shot lead. Delaware’s women’s team had crossed the street from Caledonia Golf Club, where they were competing in the women’s division of the Fall Challenge, and crowded the porch overlooking True Blue’s 18th green to see the finish.

Nieves sailed his approach shot past a front hole location and over a ridge in the middle of the green, leaving himself a 15-foot comebacker. Despite three-putting there, Delaware players erupted at the team’s one-shot victory.

No. 18 had ultimately been the decider, with Delaware playing the hole in 1 over and Mercer going 6 over there.

Post has been at the helm for the Blue Hens for five years and the Golfweek Fall Challenge marked the team’s first win in her tenure. It was the first win period since 2016.

“I think it just gives them confidence that they are capable,” she said.

Mercer head coach Jason Payne, who returned this season after coaching the Bears from 2003-2007 (his first head-coaching gig), has a motto that’s fitting for the way Tuesday’s final nine holes unfolded.

Payne is one of the masterminds behind the Any Given Tuesday social media platform in college golf. The idea that anything can happen on any given Tuesday (the day on which college golf tournaments typically finish) certainly played out at True Blue.

“It was great golf, it was pressure packed coming down the stretch,” Payne said. “Again I can’t say enough about how well Delaware played.”

Mercer had spent much of the past few weeks qualifying back home in Macon, Georgia, in 100-degree heat. After that grind, teeing it up at True Blue, a getable course with generous fairways, presented an opportunity to score that Payne’s men took advantage of.

“While no one is pleased to finish second at a tournament and give up the lead we had, if anything it will leave you a little hungry,” Payne said.

The season is young.