As cheers and horns sounded across the Labor camp in northern Sydney, the Liberal faithful gathered 10 kilometres away in the CBD watched on with blank disbelief as their leader Scott Morrison conceded the end of a decade-long Coalition reign.

Slumped down with his hands on his knees, one Liberal supporter pursed his lips as former treasurer Josh Frydenberg announced his re-election was “definitely difficult” in the face of a strong independent swing.

Around him, about 500 shell-shocked party faithfuls stood silently as once blue-ribbon seats morphed into shades of red, green and teal.

Despite successive polls predicting a Labor victory, many in the Coalition camp had been hopeful of sandbagging key marginal seats, buoyed by an at-times rattly Albanese campaign that lost some of its polling ground in the final weeks of the campaign.

They arrived at the Fullerton Hotel in the heart of Sydney dressed to the nines – some donning sharp tuxedoes and silky ballgowns – with an aura of quiet confidence and privilege that only comes with supporting a governing party.

“Strong economy. Stronger Future” read signs brandished either side of a three-metre-sized Australian flag hung from the stage.

But as the night wore on across the country, the Coalition appeared weaker and weaker, as it surrendered key inner-city battleground seats to the so-called “teal independents”, while also losing significant ground to the Greens in Queensland and Labor in Western Australia.

Making things worse for the party was the loss of some of its youngest and brightest stars.

Mr Frydenberg – once touted as a future Liberal leader and even prime minister – had been fighting one of the greatest challenges of his political career in his eastern Melbourne electorate of Kooyong.

But not even his esteem as treasurer could save him from the teal wave that swept through the country: He suffered a crushing swing to the Climate 200-backed independent Dr Monique Ryan that is likely to end his political career.

“So, while it’s mathematically possible that we win in Kooyong, it’s definitely difficult.”

Other Liberal MPs remained more upbeat, such as moderate Tim Wilson, who refused to concede defeat to independent Zoe Daniel in the Victorian seat of Goldstein despite suffering an 11.3 per cent swing.

“The independents have really put a spanner in the works,” a resigned Liberal supporter quipped back at the Sydney headquarters.

As the night wore on, it was clear the Liberals were increasingly perturbed by the numbers flowing through on their screens.

Once ABC election analyst Antony Green declared it impossible for the Coalition to form government, the Liberals turned off the sound on the Sky News and ABC news feeds, only turning the volume back up to hear Mr Frydenberg deliver his speech.

Whispers then started circulating about when Scott Morrison would appear, with the mood shifting from one of anticipation, to wanting the night to be over.

Former prime minister John Howard’s arrival late in the piece lifted spirits momentarily, with supporters and reporters mobbing the 82-year-old as he and his wife Janette made their way through the crowd like rock stars.

Just 20 minutes later, Mr Morrison made his long-awaited arrival, flanked on stage by daughters Abbey and Lily and wife Jenny, who accompanied him for the entirety of the final week of campaigning.

The sombre mood lifted, with Liberal supporters chanting “Scomo” as he waved to his supporters.

“Tonight I’ve spoken to the Leader of the Opposition and the incoming Prime Minister Anthony Albanese, and I congratulated him on his election victory this evening,” Mr Morrison said, to scattered applause.

“I think on a night like tonight we can reflect on the greatness of this democracy.”

The blow for his true believers came a few minutes later.

“I will be handing over the leadership at the next party room meeting to ensure the party can be taken forward under new leadership, which is the appropriate thing to do,” he said.

At the end of his speech, one party faithful hugged her partner with tears visibly welling in her eyes, while another yelled: “Love you Scotty”.

By midnight, the majority of supporters had departed, with just the media left to reflect on the party’s crushing blow. 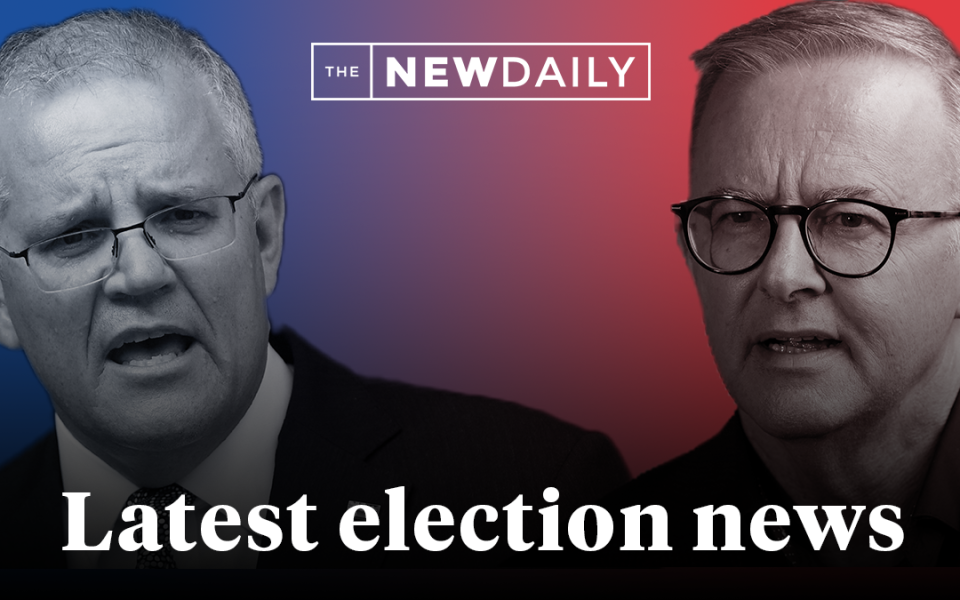 The New Daily
One subscription that gives you access to news from hundreds of sites
Federal election 2022: Who are the winners and losers?