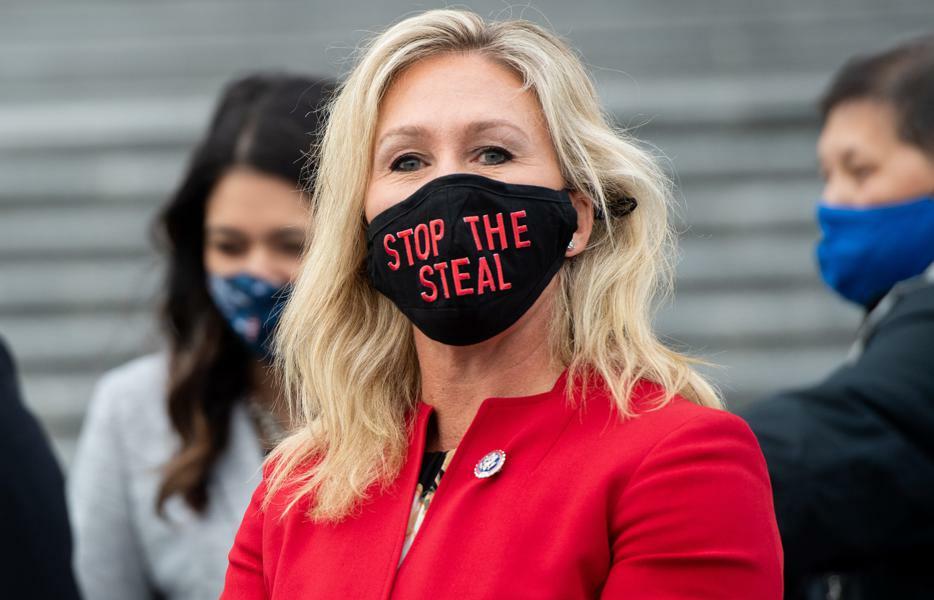 Rep. Marjorie Taylor Greene (R-Ga.) drew ire online Thursday after she attempted to support the Brooklyn Nets’ Kyrie Irving’s refusal to get vaccinated against Covid-19 by attacking the National Basketball Association and inaccurately comparing the coronavirus with HIV.

Greene characterized the NBA as “fascist” in a Thursday afternoon tweet because the league “won't let Kyrie Irving play for refusing a vaccine.”

The congresswoman from Georgia also accused the NBA of hypocrisy, declaring, “Yet they still let Magic Johnson play with HIV.”

The backlash on social media toward Greene was immediate, with many people pointing out the coronavirus is a highly transmissible airborne virus that can spread from person to person within close proximity through casual contact.

Conversely, HIV, which is typically spread via unprotected sex or the sharing of intravenous needles, cannot be transmitted via casual contact.

Furthermore, the NBA is not responsible for Irving being unable to play, as the league and the player’s union have agreed a vaccine mandate will not be enforced this season.

Irving's inability to suit up this season is due to New York City's vaccine mandate, which prevents him from playing in home games, and a consequent decision by Nets ownership and managerial staff.

Although the NBA stated it would not implement a vaccine requirement for players, the league informed teams in September that they would have to follow local regulations. Thus, Nets players are prohibited from entering their home arena in Brooklyn unless they are vaccinated. On Tuesday, Brooklyn general manager Sean Marks announced that, after consulting with billionaire owner Joe Tsai, Irving would not be permitted to play in away games or practice with the team until he is vaccinated. On Wednesday, Irving finally broke his silence, asserting in an Instagram video that he is not explicitly antivaccine but that “nobody should be forced to do anything with their bodies” and that he was committed to “standing with all those that believe what is right.” Greene has made a name for herself by continually stirring up controversy in Congress since being elected in January and being twice suspended from Twitter over the summer. In late July, Greene was hit with a 12-hour ban after erroneously tweeting that the coronavirus was not dangerous for young people who were not obese. In August, she was suspended from the platform for a week after falsely claiming that the vaccines were “failing” and that the Food and Drug Administration shouldn’t approve them. Greene has made several statements indicating support for a wide variety of conspiracy theories, including baseless claims about 9/11 and "false flags" related to mass shootings. While in office, she has used her Twitter account to promote the conspiracy theory that widespread voter fraud enabled Joe Biden to "steal" the 2020 presidential election. In 2017, Irving publicly proclaimed his belief that the Earth is flat. "This is not even a conspiracy theory. The Earth is flat," Irving argued.

Greene isn’t the first figure on the right to attempt to liken Covid-19 to HIV. On Wednesday, Lavern Spicer, a Republican congressional candidate in Florida, expressed the same sentiment, and conservative pundit Clay Travis tweeted, “The NBA allowed Magic Johnson to play with HIV . . . Now Kyrie Irving can’t play without the Covid vaccine," which, he falsely claimed, “provides zero risk to any healthy adult.” Travis declared, “Covid is a far less dangerous virus” than HIV. However, fewer than 14,000 Americans die annually from AIDS, while at the peak of the AIDS epidemic in the U.S. in 1995, the Centers for Disease Control estimated 50,000 people died from the virus.

In response to Green's post on Thursday, Eugene Scott, a reporter for the Washington Post, tweeted, “This argument—which is rooted in myths & misinformation about how HIV is spread—is going to be a growing talking point among some on the Right.”

Spencer Haywood, an NBA Hall of Famer and member of the Dean’s Advisory Council at Roseman University College of Medicine, told Forbes via email on Thursday evening that Irving is “squandering an opportunity, not just for a championship and a responsibility to his teammates, but to be a real role model during the most serious public health crisis in our lifetime.” Haywood asserted that Irving has “a responsibility to be a role model in our league, in our community and in our country,” adding, “I hope Kyrie will meet this moment because the fight we are in against this virus is greater than any one individual.”