Defenders of 10,000 year old bog hold vigil at the Dail 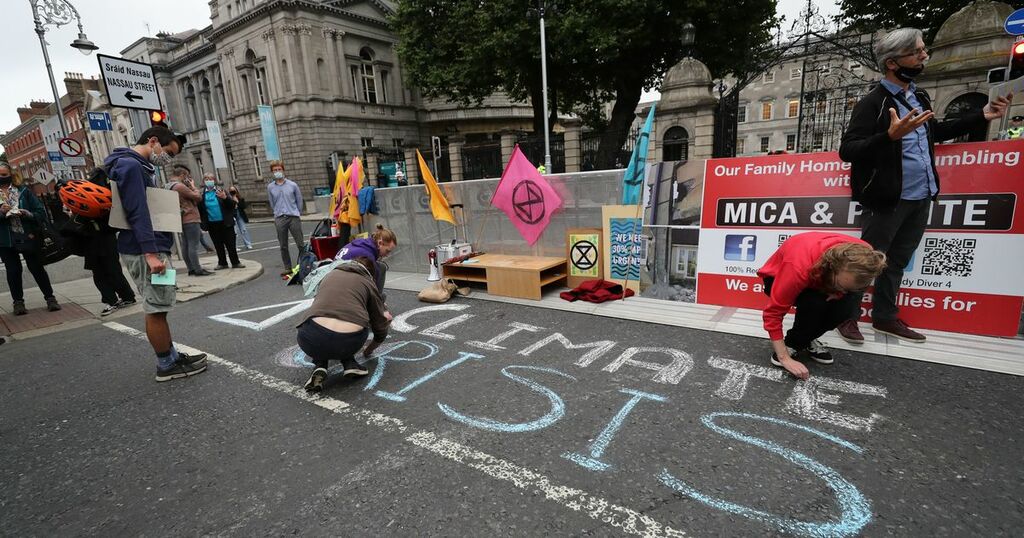 Defender of a 10,000 year-old bog in Co Louth held a silent vigil for its at risk curlews outside Dáil Éireann on Wednesday.

They are calling on the government to bin plans for a road right through the middle of their home in the proposed natural heritage area and designated flood zone.

Plans for N52 West to North through Ardee Bog first reared their head 20 years ago.

But those opposed to the route right through the ancient bogland and wildlife habitat have called for a rethink in line with new science on the climate crisis and habitat loss.

Anne Lennon from Friends of Ardee Bog said: “We think they are putting the road in the wrong place.

“It will not alleviate the core congestion in Ardee which has changed in the 21 years since this concept began.

“The second thing we feel is entirely about the environment.

“They are putting the road through precious, finite environment which when it’s gone, it’s gone and the damage is done.

“It took 10,000 years for this peatland to place itself here and they could take it out in a matter of months.

“The authorities are the very people who should be protecting it for the sake of the environment, the climate and future generations.

“I’m 66 and I have lived here all my life and I never thought there was a chance our own government would squander such a precious heritage treasure.

“It’s time we really held on to each little precious bit that will help our world sustain itself in terms of rebalancing nature.”

Plans for a new road around Ardee go back to 1999 with two proposed routes drawn up in 2001 according to Anne.

“The second route would be a better fit in 2021 because it’s on the southern end of the town where the great congestion is currently,” she explained.

“7,000 vehicles a day come in from the south end of Ardee...whereas at the western end only 3,000 vehicles come in and a great proportion are filtered from a one way system in the town that exaggerates the numbers.

“Aside from that is the environment,” she added.

“We only realised when it was reactivated in 2018 that it was actually going through part of Ardee Bog, the proposed natural heritage area.”

In the Louth Development Plan 2021-2027, Ardee Bog is listed under both ‘Areas of High Scenic Quality’ and a ‘Proposed Natural Heritage Area’, which the council itself said “will help ensure the protection, restoration, and conservation of Ardee Bog for generations to come”.

Over 10,500 people have signed a petition opposing the route, which the group handed in for Eamon Ryan, Minister for the Environment, Climate and Communications and Minister for Transport.

“My message to Eamon Ryan is to ask him to stall it, take a measured assessment of it and look at the consequences of attempting to put a hard surface through a precious habitat that has an ecosystem that took 10,000 years to put there,” added Anne.

“They will literally destroy it and all the wetland life that depends on it in a couple of months.”

Among that wildlife is the curlew, whose numbers have fallen dramatically in recent years.

“Divert the road,” she added.

Extinction Rebellion have also called on the Minister for Transport to act as Ireland’s peatlands and bogs are the most important long-term carbon sink in our terrestrial biosphere.

“We are calling out the disconnect between the government’s words and lack of Climate Action,” they said in a statement.

“The message is clear: Ireland declared a Climate Emergency in May 2019. We want to know; Why is the Irish government now building a road through a bog and a designated Flood Zone?”

The Irish Peatland Conservation Council (IPCC) says: “Ardee Bog is the very last and most easterly raised bog within County Louth and the Republic of Ireland.”

A spokesperson for the council said: "Louth County Council always has regard to environmental designations when undertaking projects."