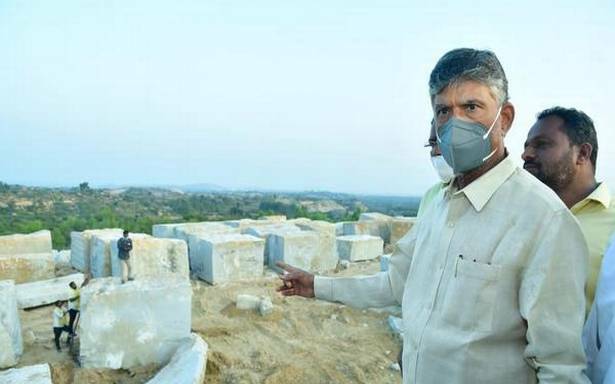 TDP national president N. Chandrababu Naidu on Saturday alleged that the YSRCP government had cheated the youth in the name of the job calendar.

Addressing a roadshow at Jatakartanapalle of Gudupalle mandal, near Kuppam, on the third day of his visit to his constituency, Mr. Naidu said the government’s much-publicised job calender had upset the unemployed and educated youth, as it was limited to setting up meat and fish markets, and petty jobs.

Mr. Naidu said that Chief Minister Y.S. Jagan Mohan Reddy was promoting consumption of sub-standard liquor, besides increasing the cement prices of the brand owned by his family.

“The defeat of the YSRCP is certain in the next elections as Mr. Jagan Mohan Reddy has pushed the State into bankruptcy,” Mr. Naidu said.

Accusing the YSRCP leaders of deploying the village / ward volunteers to intimidate and prevent people from attending his meetings, Mr. Naidu said, “Despite the threats, the people of Kuppam are attending the meetings in large numbers.”

Mr. Naidu also criticised Mr. Jagan for sticking his images for the schemes sponsored by the Central government.

Earlier, a delegation of the TDP cadres met Mr. Naidu in Kuppam and brought to his notice the alleged removal of the Ambedkar statue in Ramakuppam mandal.

Responding to the issue, Mr. Naidu alleged the YSRCP leaders in Chittoor district were oppressing the Dalits. He also alleged that the police officers were working in favour of the ruling party.

“Atrocities against Dalits and their suicidal deaths are on the rise in the YSRCP rule,” the TDP chief alleged.

Refuting the allegation, Mr. Ramachandra Reddy told the media that he was ready to quit politics if the allegation was proved. “I challenge Mr. Naidu to prove the charge. Mr. Naidu has lost the confidence of the people of Kuppam. He will be defeated in Kuppam, and it will be given as a gift to Mr. Jagan Mohan Reddy,” he said.