Heartbreaking tributes have been paid to Father Dermott Donnelly at his funeral mass on Friday.

The popular priest and brother of TV host Declan Donnelly sadly died earlier this month at the age of 55.

At his funeral mass on Friday, Fr Donnelly - who was best known for his work with young people and youth ministry - was remembered as a man "who done a lot and said little".

Fr Dermott was one of seven children, brothers - Declan, Martin and Eamonn - and sisters - Camelia, Patricia and Moira.

Declan Donnelly, 46, was surrounded by his loved ones, including his TV co-star Ant McPartlin.

Father Dermott, who had an extremely close bond with Declan, passed away age 55 following a serious illness on Friday July 8 after he was rushed to hospital.

Declan was supported by his wife Ali as his family and mourners attended the funeral, which was held inside St Mary’s Cathedral in his hometown of Newcastle, while photographers were invited outside the church.

The TV star wore a black suit, waist coat and tie along with a white shirt as he gathered outside the cathedral alongside loved ones.

A Requiem Mass, which was live-streamed on YouTube, was held for popular priest Father Dermott at the cathedral at 12pm.

Dec's TV best friend Ant McPartlin was spotted arriving at the Newcastle cathedral ahead of the ceremony. He wore a black suit, white shirt and black tie while he was accompanied by his wife Anne-Marie.

A hearse carrying Father Donnelly's coffin was photographed heading to St Mary’s Cathedral, followed by a procession of black cars.

The cathedral was packed with Dec's sibling's loved ones as they bid farewell to the beloved priest.

The night before, Declan and relatives carried his brother's coffin inside St Michael’s Church, where Declan married Ali Astall in 2015, ahead of the service.

Declan, who's brother Father Dermott officiated his wedding, was seen with his head bowed and looked deep in thought.

He was supported by his wife Ali, who recently welcomed their second child, as he dressed in all black wearing a T-shirt and suit.

TV star Declan paid tribute to his brother following the sad news of his passing on Twitter.

He wrote: "I am heartbroken to tell you that my darling brother Fr Dermott,

@TweeterPriest, sadly passed away this afternoon. We are all beyond devastated. Thank you for your messages of sympathy and support, they are appreciated DD".

A spokesperson for Dec also told the Mirror: "It is with great sadness that we confirm the death of Fr Dermott Donnelly who died peacefully this afternoon in hospital surrounded by his family and close friends."

It read: "Fr Dermott you were the kindest, wisest man I knew. Rest in peace my friend. You will never be forgotten.

"My thoughts, prayers and love are with your wonderful family. The world has lost a special man. X A". 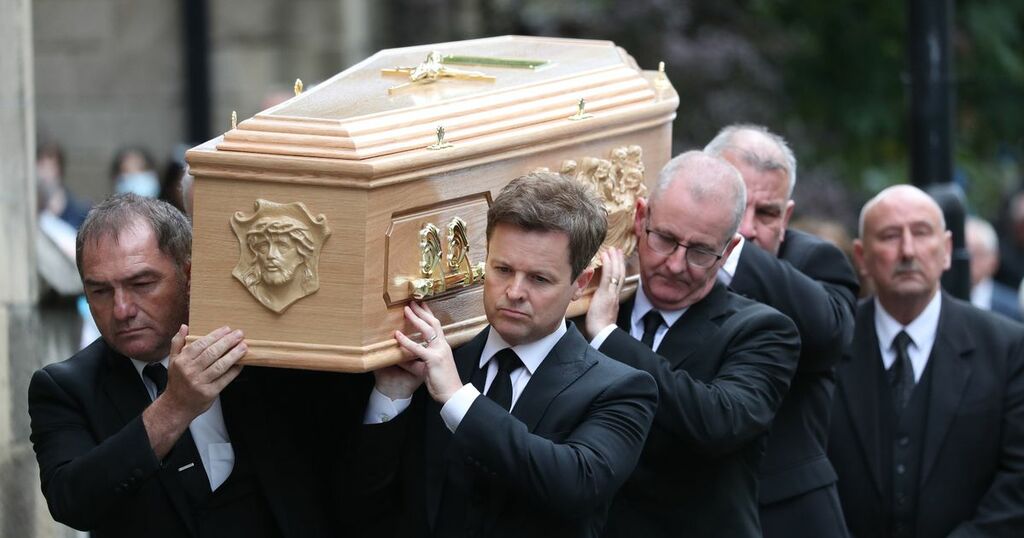 Daily Mirror
From analysis to the latest developments in health, read the most diverse news in one place.
Dec Donnelly fights back tears as he carries Priest brother Dermott's coffin into funeral

Father Dermott died at the age of 55 following serious illness

Daily Record
One place to find news on any topic, from hundreds of sites.
We’ll miss you immeasurably: Declan Donnelly pays tribute to brother at funeral