Debate over net zero in Australia is heating up as calls for more climate change action grow. Here's the background 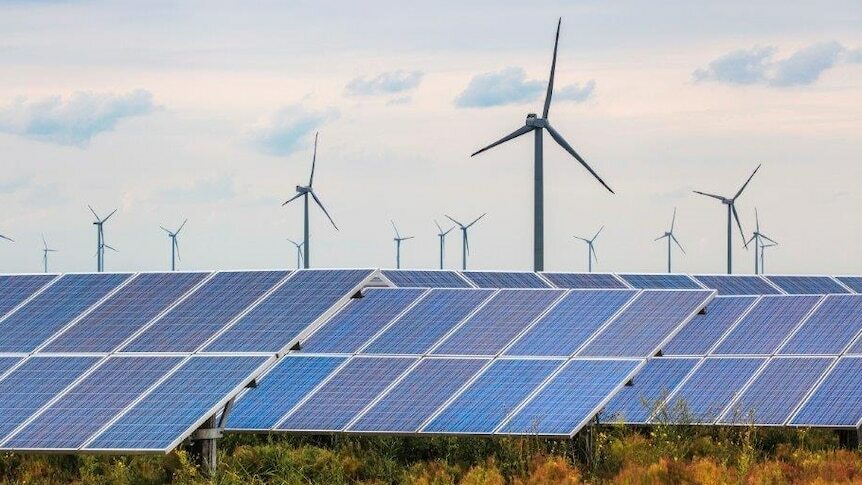 An internal debate in the federal Coalition over climate change is heating up, and the Prime Minister is facing calls to attend the COP26 global climate conference next month.

At the heart of the matter is the increasing pressure on the federal government to introduce a target of net zero emissions by 2050, following countries like the UK, Canada, US and Japan.

We're going to be  hearing a lot more about net zero over the coming month, so here's a basic refresher on what exactly it means, and where everybody stands.

What is net zero?

The UN's Intergovernmental Panel on Climate Change (IPCC) defines net zero as "when anthropogenic emissions of greenhouse gasses to the atmosphere are balanced by anthropogenic removals over a specified period".

So it doesn't mean completely eliminating emission-producing technology from our society, but it does mean drastically reducing our reliance on it and investing in ways to ensure that what is emitted can be neutralised.

As an example, let's look at the greenhouse gas of most concern: carbon dioxide, or CO2.

But there are natural ways to remove CO2 from the atmosphere: trees absorb it and release oxygen, while soil and ocean ecosystems can act as carbon sinks, removing it from the air.

Currently, human activity produces CO2 at a faster rate than it is naturally absorbed, leading to a build-up in the atmosphere which scientists say is contributing to climate change.

In a net zero situation, a country (or state, or business, or the world) would reduce its emissions and invest in carbon reduction to a point where the scales balance, and every new tonne of CO2 emitted would be cancelled out, ending the build-up of carbon in the atmosphere.

The IPCC has recommended drastically reducing emissions in order to limit global warming to 1.5 degrees Celsius.

How do you reach net zero?

Greenhouse gas emissions come from a range of sectors including industry, energy generation, transport and agriculture.

According to the IPCC, the pathway to net zero is "predominantly" through reducing greenhouse gas emissions, rather than removing them from the air.

That means increasing reliance on greener energy production like wind, solar and pumped hydro, and moving away from coal or gas fired power plants.

The IPCC says carbon dioxide removal does factor into the equation to a "smaller degree", meaning it sees no viable way for the world to reach a net zero target simply by increasing carbon neutralisation.

CO2 removal can include planting more trees, fostering other ecosystems that function as carbon sinks, or the emerging and contentious field of capturing carbon and storing it underground.

These measures can be funded by carbon offsets, which the Grattan Institute has said will likely play a role in a push for net zero emissions in Australia.

Offsetting works by allowing individuals and companies to offset their emissions by investing in green projects or renewable energy either in Australia or around the world.

However, offset programs are controversial among some environmentalists, who say they can easily fall victim to bad accounting, for instance where offsets are sold for projects that have a limited impact on the environment. Greenpeace has called for an end to carbon offsets, saying they move too slowly and are too difficult to trace.

The federal government has previously championed carbon capture and storage, however, it has experienced reliability issues.

Energy Minister Angus Taylor said the federal government hoped to deliver a plan that would include a continued reliance on "traditional industries".

Does Australia have a net zero target?

Not formally at a national level.

Every state and territory government has set a target of net zero by 2050, and Prime Minister Scott Morrison has previously said the federal government's goal is to get to net zero "as soon as possible, and preferably by 2050."

But that could be about to change.

The federal government is in the final phases of developing a climate policy that is expected to commit Australia to net zero emissions by 2050.

However, some in the coalition's ranks, particularly among the Nationals, have raised concerns about a net zero commitment, arguing it could adversely affect regional communities reliant on the resources and energy sectors for work.

The government has also previously raised questions about the reliability of renewable energy during times of peak demand or low generation.

But international pressure for net zero targets to be adopted is growing, particularly ahead of the COP26 climate conference in Glasgow next month.

Mr Morrison has not committed to attending the conference, but is considering it.

Countries that have already committed to a net zero by 2050 target include:

The European Union as a whole has also committed to a 2050 target.