Debate on the relevance of Kallar reclamation and Adi-Dravidar schools 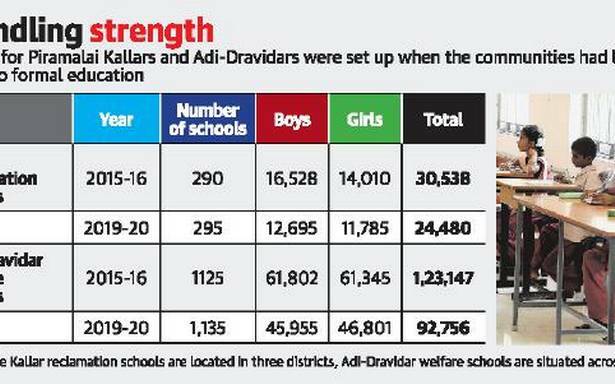 A debate on the continued relevance of Kallar reclamation schools and Adi-Dravidar welfare schools, vestiges of the British raj, is under way.

Both types of institutions have been in existence for over a 100 years. While the first category was established to constructively engage the children of, what were once called, criminal tribes, the second became possible, thanks to initiatives by leaders of the Scheduled Castes, such as Ayothidoss Pandithar. The schools were founded when the communities had little access to formal education.

Kallar reclamation schools are located in Madurai, Dindigul and Theni districts, where Piramalai Kallars are predominantly concentrated. Piramalai Kallars form part of 68 denotified communities (DNCs) that include Maravars and Vettuva Gounders. Adi-Dravidar welfare schools are situated across the State. As many as 76 castes have been enumerated as SCs. Both categories of institutions admit students from other communities too. Kallar reclamation schools come under the jurisdiction of the Backward Classes, Most Backward Classes and Minority Welfare Department, and the latter under the Adi-Dravidar and Tribal Welfare Department.

The question being raised in certain quarters is whether these schools should remain in their present form. One of the reasons being cited is that the strength of students is on the decline. Besides, in the last 30 years, the number of private schools and their student strength have gone up sharply. The idea of integrating Kallar reclamation schools and Adi-Dravidar welfare schools with those being run by the School Education Department has been exercising policy makers at different points of time.

Thanga Tamilselvan, the DMK’s Theni (north) district secretary, and Dindigul C. Sreenivasan, former Forests Minister, feel strongly that the need for Kallar reclamation schools still exists, as the institutions are doing “exemplary service” to the community. However, there is scope for improving the working of the schools.

V. Selvam, president of the Chennaivazh Piraimalai Kallar Nala Vazhvu Sangam, calls for the adequate utilisation of funds earmarked for the schools. An official, familiar with issues of the schools, says the community demands retention for “protecting its identity.”

P. Sivakami, a former civil servant, opposes any move to disturb the present arrangement concerning Adi Dravidar welfare schools and says that there are several questions to be answered by those who favour the change.

“Does the term mainstreaming mean only this? Has the purpose behind the formation of the schools been fully served? Has untouchability been eradicated? Has the distribution of land [among SCs] been completed?” he asks.

The former civil servant demands that Adi-Dravidar welfare schools be run on the lines of the School Education Department, be it in terms of deployment of resources or the provision of opportunities for job promotion for teachers and other staff.