Dear Dave Chappelle, transgender comedians can take a joke, but why are yours so unfunny? 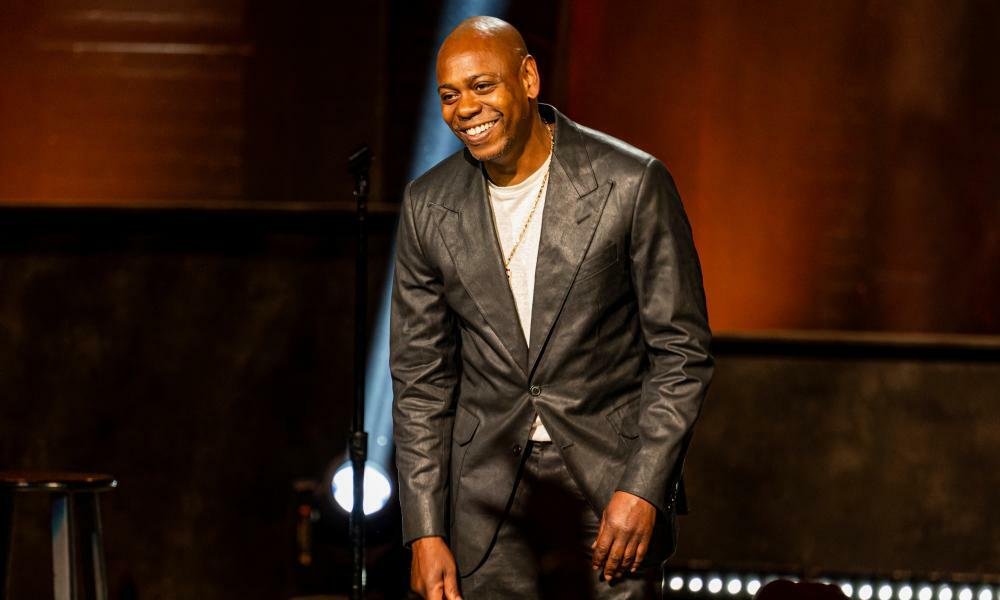 We’re both comedians. I guess that makes me a member of your tribe. I’m sure you’ve never heard of me, though, and I can think of at least three reasons for that: I’m Black; I’m a woman; I’m transgender (ie “a trans”).

No, I’m not writing in hopes of someday opening for you. In fact, I can’t think of anything I have ever wanted that you could possibly offer me – least of all an apology. I don’t need an apology for all the trans jokes. I’m 40 years old. You think I’ve never heard a trans joke? Years before I knew “trans” was an available identity, I knew “trannies” were punchlines, and that’s what’s got me, and my peers, salty about your latest special, The Closer.

“I am legitimately thankful for Chappelle’s special for one reason. I’ve always been a bit self-conscious that the first 15 minutes of my hour special are trans jokes, but now that he spent over an hour on LGBTQ people, I feel pretty good,” said Robin Tran. Or, as my friend and fellow comedian Jeffrey Jay put it: “Each time I hear that Dave Chappelle has a new special, I feel sad. Not because I know the trans jokes are coming, but because I know the same trans jokes are coming.”

Watching The Closer reminded me of just how influential you had been on my early standup and understanding of comedy. Your formulaic joke structure and all-too-predictable edge-lord punchlines took me right back to my very first year performing at open mics. But hey, you’ve been doing this for 33 years. That’s no small achievement. It only makes sense that you might run out of new ideas. Even so, as a longtime fan, something I always admired about comedy was its ability to push boundaries and challenge norms. Now it’s 2021, and I think we can all agree that bitter old men griping about progress are killing comedy.

Were I to bitch and moan about people having taken offense at a previous set, I would be rightly booed off stage. And y’know what? I’d be grateful, because I’m a comedian, and criticism is how we grow. So watching your special, I couldn’t help but think: this dude is 48 years old, been doing comedy for 33 years, and still hasn’t built up a thick enough skin to take criticism? It’s rather sad, actually, because as comedians it’s our job to say shit for money. There’s no obligation on anyone else to approve of the stupid shit we say, which brings us to our next issue.

After coming on stage, you rightly call attention to your status as “rich and famous”, which is the only reason anyone gets a laugh break for “Black people beating up Asians”. Hate crimes aren’t so much a joke as an American way of life. It would be like getting a laugh break for saying: “I drank a cup of coffee.” This is, of course, only the first of many more basic jokes to come.

What’s it called when a troll says every offensive thing they can think of to distract their audience from the shitty belief they’re trying to defend? Deflection? Yeah. That’s the best section of what devolves into a Ted talk for terfs, starting with your tortuous claim to being a feminist – for the first time ever. To be fair, your observation about white America being more appalled by Black people repeating, on stage, what we’ve heard our Black mothers say than they are by a Black man murdering another is valid. Problem being, in this context, it’s only about as valid as, say, “What about Black on Black crime?”

You cunningly ask your audience: “Is it possible that a gay person can be racist?” Obviously, the answer is yes, and obviously that has nothing to do with your comedy being outdated, transphobic, and, frankly, hack. In an honest debate, you can’t simply use “racist, white, (gay) male” interchangeably with “LBGT”, which is also not synonymous with “the trans”. Since you also enjoy Google, I recommend the following terms: “straw man”, “gaslighting”, and “motte-and-bailey fallacy”. Also, just to be petty, you owe me royalties for that “Mike Pence is gay” joke. I wrote it four years ago, when it was first relevant.

On behalf of the trans community, I’ll go ahead and address your weakest defenses. How much do you have to participate in my self-image? Not at all. I just want you to shut up. You said: “You shouldn’t discuss this in front of Black people.” Why, Dave? Why shouldn’t you discuss this in front of Black people? Did you once again imagine all trans people are white, or do you assume there is some inherent danger awaiting us among the larger Black community? And why might that be? Regardless, neither explanation sits well with me.

You asked: “Why is it easier for Bruce Jenner to change his gender than it is for Cassius Clay to change his name?” That’s because Muhammad Ali changed his name in 1964, whereas Caitlyn Jenner changed her gender in 2015. Other factors in Jenner’s favor include living in California, and, most importantly, being rich and famous, just like you, Kevin Hart and DaBaby, who no one references as Jonathan Kirk. You’re basically comparing apples and interstellar spacecraft.

We are listening, Dave. We listen when you declare yourself “team terf”. We listen when you compare our genders to blackface, as if both were defined by slapping on some paint, to make a mockery of those we oppress. And what about you, Dave? What could be a greater mockery than you throwing Black women under the bus to cape for JK Rowling, an insidious white woman? But hey, you claim Caitlyn Jenner is a wonderful person.

“[Chappelle is] standing in solidarity with a woman who can imagine a muggle child living under the stairs until he’s rescued by magic owls, and becomes a wizard, but can’t imagine that gender isn’t defined by what’s in your knickers,” said Carlos Kareem Windham.

I too may never write another joke again, now that you’ve proven it unnecessary. See, Dave? We got jokes. We’ve got jokes for days. And ours are funny, because they’re about us. They’re about our lives, our joys, our trials. Some of us built our chops telling these jokes to save our lives. Luckily, there are transgender men, women, and infinite other genders of every race and nationality, and quite a few of us are comedians with well-developed senses of humor. I’ve quoted just a few throughout this letter.

When it’s all said and done, tranny jokes are tranny jokes. We write them all the time. It’s only the last 16 minutes of your closer that really pisses me off.

Again Dave, some of us are Black, and when I was growing up in the midwest, there was never a shortage of racist white dudes to tell me about their Black friend, who gave them permission to say “nigger”. I hear you, Dave. I hear you holding up our fellow comedian Daphne Dorman as the Good Tranny, who never made Dave feel bad for being transphobic. Daphne Dorman, your “friend”, who you describe as a terrible comedian, and didn’t know she had a child until reading her obituary, after she had killed herself, eight days after the one time you actually spent any significant amount of time with her, in person. As if that weren’t insulting enough, you then double down, as though you were representing a greater community to her than her trans community, and I have to wonder how many “transgenders” knew her, loved her, supported her, and encouraged her that you erased, so cavalierly.

In a community with an abnormally high rate of depression and suicide, that’s the part that hurt. Every transgender person I know has lost someone by suicide, and rarely has the reason ever been what other trans people have said to them on Twitter. Hell. You said it yourself, Dave: “Twitter isn’t real.” The marginalization, mockery, dehumanization, and violence many of us face everyday of most of our lives is what fuels our despair. For you to use Daphne’s tragedy as your closing tag is the only thing you’ve done that’s made me angry enough to write a letter.

• In the US, the National Suicide Prevention Lifeline is at 800-273-8255 and online chat is also available. You can also text HOME to 741741 to connect with a crisis text line counselor. In the UK and Ireland, Samaritans can be contacted on 116 123 or email jo@samaritans.org or jo@samaritans.ie. In Australia, the crisis support service Lifeline is 13 11 14. Other international helplines can be found at www.befrienders.org