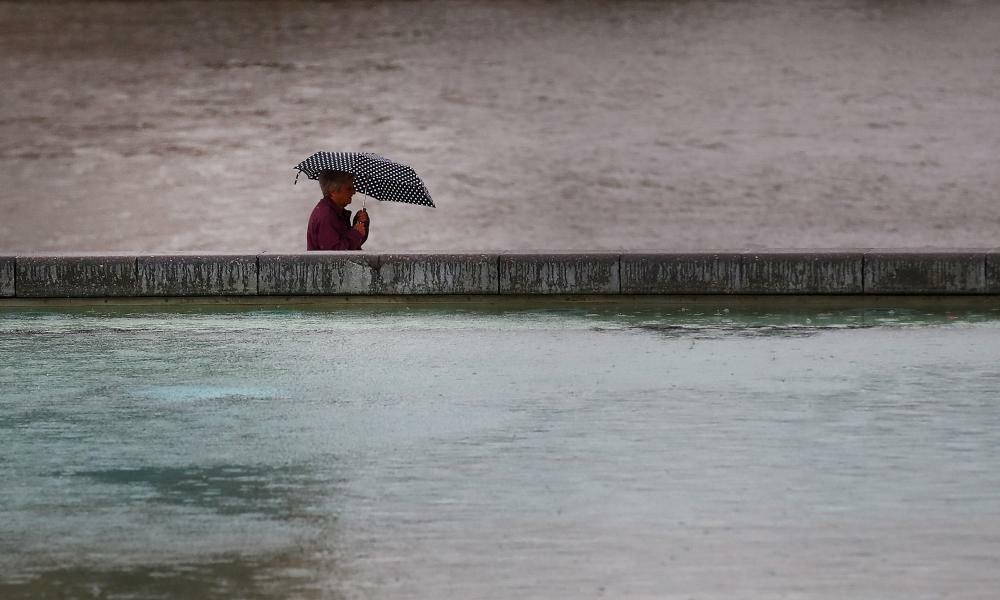 Flooding rains expected to continue lashing Queensland
More than 530 roads have been affected and 14 state schools were closed, with further heavy falls forecast

A man and has dog are missing from a campsite in a flooded part of southeast Queensland with intense rain pushing the region to the brink of disaster.

A vast area is awash on Thursday with hundreds of roads cut and councils on alert as major rivers break their banks after up to 224mm of rain fell in 24 hours, and more rain forecast when a low crosses the coast in the evening.

Police are searching for a 36-year-old who was last seen chasing his dog away from the Yabba Creek Road campground near Imbil, south of Gympie, about 11.30pm on Wednesday.

Emergency alerts have been issued for people living along Cooby Creek near Toowoomba to prepare to flee after the Cooby Dam started spilling.

Parts of Grantham in the Lockyer Valley, west of Brisbane, have been inundated and authorities warn residents that multiple roads will remain underwater on coming days.

To the west, the Bureau of Meteorology is warning Roma, St George, Blackwater, Mitchell, Rolleston and Injune residents of that severe thunderstorms could bring heavy rainfall and flash flooding in coming hours.

Sunshine Coast Hinterland and Wide Bay-Burnett residents have been told to prepare for severe weather and possible flash flooding in the early hours of Friday.

The forecaster said six-hour rainfalls of 160mm are possible as a low pressure trough crosses the coast overnight and the weather deteriorates on Friday.

"Locally intense rainfall which may lead to dangerous and life-threatening flash flooding is possible with thunderstorms during Friday afternoon," the BOM said in an alert on Thursday.

Major flooding is forecast for Laidley Creek and the Mary River at Gympie with moderate flood warnings for the Bremer, Lockyer and Brisbane rivers on Thursday and Friday.

A woman in her 30s died in the floods near Mackay, in the state's north, earlier this week as unseasonal May rain, up to 10 times the monthly average, hit vast areas of the Sunshine State.

A driver in his 60 was treated for hypothermia after spending Wednesday night clinging to a tree in floodwaters near Bundaberg, while at least five other people escaping flooded cars in the greater southeast.

Queensland Fire and Emergency Services received 114 calls for help in the 24 hours to 9am on Thursday, mostly in the southeast.

Fourteen state schools have closed due to the flooding and more than 530 roads have been closed or are impacted.

The BOM has warned of further heavy rainfall over the next 24 to 48 hours, before lowering in intensity and easing following the weekend.

Flooding rains expected to continue lashing Queensland
More than 530 roads have been affected and 14 state schools were closed, with further heavy falls forecast