De Silvestro: Now I know what to expect from current IndyCar

De Silvestro, who raced the 2021 Indy 500 for Paretta, opened her 2022 account on a road course – the first time she had raced an IndyCar on a road course in seven years. Being Road America, and lacking any pre-race testing, it was a tough refresher course.

Beth Paretta’s ‘women forward’ team is this year run in partnership with Ed Carpenter Racing (as opposed to last year’s outing with Penske), so De Silvestro’s most obvious comparison points were Rinus VeeKay and Conor Daly. Unfortunately, it was a rough weekend as a whole for the ECR team.

In first practice, De Silvestro was 3.1sec off the fastest time, 1.8sec from Daly and only one second slower than the struggling VeeKay, while in FP2 the gaps were similar to top spot and her lead teammate.

That deficit grew considerably in Q1 – 3.5sec from the top, 2.4sec behind Daly – and while De Silvestro was hard on herself for not exploiting the extra grip offered by Firestone’s alternate compound tires, her efforts were interrupted by a drive-through penalty for speeding on pitlane, so she missed the sweet spot on her reds.

Come the race, her fastest lap was 3.3sec from Josef Newgarden’s best, 2.1sec from Daly and only 1.1sec slower than VeeKay. She would come home 21st.

“It was good to be back in an IndyCar, I was really happy about that,” she told Motorsport.com, “but for sure, results-wise there is a way to go yet. I never thought I might be back, so I’m pretty excited about that.”

De Silvestro, who had last raced at Road America in the Atlantics Championship in 2008, admitted that it had been an eye-popping venue for her IndyCar return.

“On one side, it’s a really fun track,” she said, “but on the other, with no testing before and getting back into an open-wheel car [on a road course] after seven years, it definitely impressed me. The speeds are so much higher. My engineer [John Gentilozzi] just sent me a comparison of speeds between a GT car and an IndyCar… It’s a big, big difference!

“So on Friday when I got in the car, it felt fast. You need a little bit of time for things to feel normal again at that speed, and in the race, it was starting to feel that way again – not as fast – so that’s a good sign.

“We are getting a test day this week [Thursday] on the Indy road course, and that will be really positive for me. Now I know what to expect and I can really start to work on the things that I know need most work.”

De Silvestro said that putting trust in downforce and in the extra grip offered by Firestone’s alternate compound tires had been the toughest components of her weekend.

“Running a car with downforce again, I hadn’t done that in so long,” said the 33-year-old from Switzerland. “That takes a lot of commitment and trust in the car.

“I had to work so hard to learn how to drive a GT car fast, and now I have to unlearn that again! I have a few bad habits that I picked up from racing a GT car that I have to clean up to race an IndyCar, things I need to relearn.

“And as you say, exploiting the red tires. We got one set on the Friday, but at that time I was still trying to get my head around everything about being back in an IndyCar. So I didn’t use them that well. And then next time I tried them, it was qualifying, when you really need to push hard and be on the limit right away to get the best laptime out of it while the tires are at their maximum grip. It’s been a while since I drove in a series that needed that, so again, now I know what to expect and will work on getting up to speed faster.”

De Silvestro said that although simulator time has been useful, there is no substitute for ‘real’ miles in the cockpit.

“I need to be in the car, comparing myself with everyone who has been in the car for half a season already,” she said. “It’s important for fitness too: you get ‘driving fit’ by being in a real car, better than being in the gym. And I think being in the car is also how you get your brain acclimated to going fast again.

“It’s like at Indy, the first few days the car feels really quick, but then you get used to it. That’s how it felt at Road America – Friday and Saturday it felt like the car was very fast, and then on Sunday it felt normal as my brain was getting tuned in again.

“There was quite a bit of rust to shake off, and it was really also the first time working with this team so really there were a lot of things to go through. Me and the engineer only had a couple of days to try things out.

“So setup-wise, I was definitely leaning a bit on Conor and Rinus through the weekend. For the race we made some pretty positive changes and the car we had for the long stints actually felt pretty good. There are still a few things to try, things that maybe I’ll like, so I hope we can do that in the test. I think going to Mid-Ohio after doing a whole race weekend and then a test day, things will be a bit more normal for me, we can start working on smaller things that at the end of the day make the difference.”

The crew with whom Paretta Autosport’s team members have integrated for its three outings at Road America, Mid-Ohio and Nashville, comprises the same personnel that run Ed Carpenter in the #33 ECR-Chevy on the ovals. With De Silvestro arriving in the #16 Paretta car, Carpenter elected to call her strategy.

“Oh yes, that’s awesome,” she enthused. “I’ve known Ed a really long time and when I got out of the car, I asked him if he’s going to be on my radio every race, and he said yes, and I’m really happy about that. I really enjoyed working with Ed: he’s a racer, and that makes things a bit easier.

“He’s super-calm – that’s very good for me, because at the stage I’m at, with so much going on, and having to push myself to really get up to speed and being out of my comfort zone, having him on the radio was a big help.”

De Silvestro agreed that the venue for the third (and likely final) IndyCar race in her 2022 schedule, the streets of Nashville, was a daunting prospect but pointed out that for a driver and team hoping to become full-timers in the short- to mid-term future, getting the feel of a temporary course would be a significant help.

“Also, a street course can sometimes be chaos, and you can look pretty good after that if luck goes your way!” 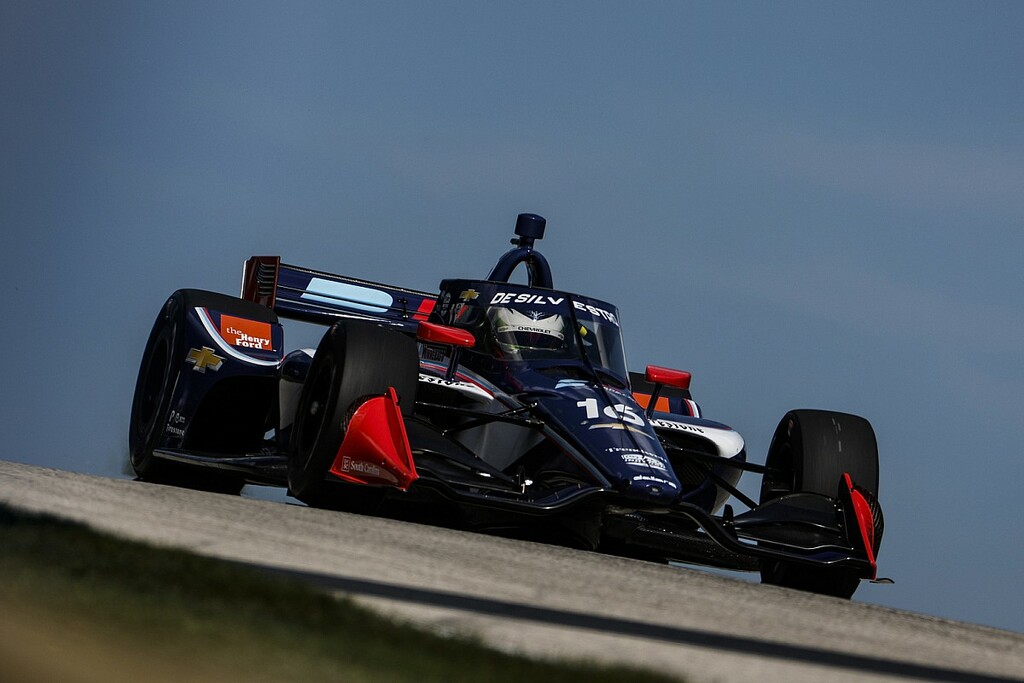 Autosport
From analysis to the latest developments in health, read the most diverse news in one place.
Iowa newcomer McLaughlin leads 19-car IndyCar test

IndyCar sophomore Scott McLaughlin headed a 1-2-5 for Team Penske-Chevrolet after a day of testing at Iowa Speedway.