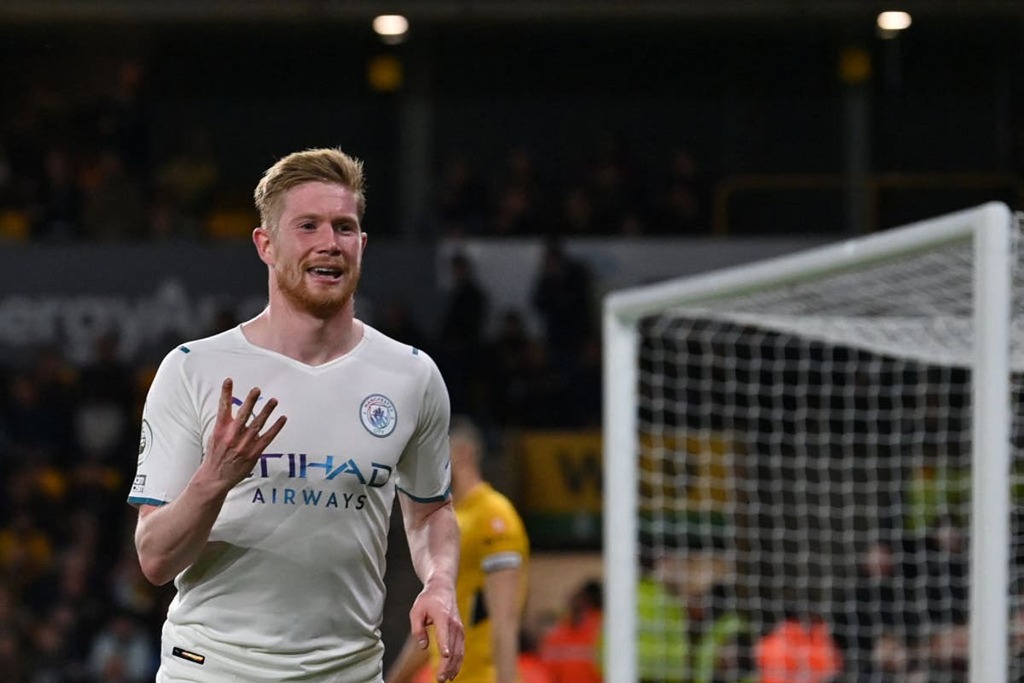 By Ben Fisher at Molineux

A week on from Manchester City’s painful capitulation in Madrid, the response has been quite magnificent. After Kevin De Bruyne rolled in his and Manchester City’s fourth goal, Pep Guardiola jumped into the arms of his assistant, Rodolfo Borrell. By then Guardiola had already ditched the mammoth black puffer coat, and the gloves have long been off in their pursuit of retaining their Premier League crown.

De Bruyne’s peerless performance helped to restore City’s three-point advantage over Liverpool at the top and there are now just two hurdles between them and a fourth league title in five seasons. Raheem Sterling added a fifth goal with six minutes to play but it was De Bruyne, who borrowed Erling Haaland’s meditating celebration as he completed a 17-minute first-half hat-trick, who fuelled this spectacular and unerring rout of Wolves.

Technically, City need four points from matches away at West Ham and at home against Aston Villa to get the job done but they effectively have an extra point given their superior goal difference: Liverpool must overturn a seven-goal deficit, as well as City’s three-point buffer, to win the title.

Even with Fernandinho and Aymeric Laporte picking up injuries to add to Guardiola’s defensive headaches, it is difficult to see City throwing it away from here. They have scored 22 goals in their five league matches since exiting the FA Cup against Liverpool last month. Imagine how many they might score when Haaland is in the building.

At the end of the game De Bruyne trotted over to the referee, Martin Atkinson, to collect the match ball. Given the mood he started in here, flashing a brilliant ball across the box that was a split-second too quick for Phil Foden to convert with barely a minute on the clock, perhaps it should not have been a surprise that he chalked up his first City hat-trick inside 24 minutes, the third quickest from the start of a game in Premier League history.

His third was the pick of the bunch. It stemmed from a City throw-in. Joao Cancelo located Sterling, who was challenged by Rayan Ait-Nouri, and when the ball spilled free De Bruyne gleefully took the baton, taking a few purposeful strides and carefully nudging the ball into a shooting position before rattling a curling shot into the bottom corner with what is supposed to be his weaker left foot. Then came the celebration, surely a nod to City’s new superstar. Welcome to Manchester.

De Bruyne got things up and running at the end of a typically calculated City attack. Bernardo Silva, who operated through the middle as a false 9, slipped De Bruyne through and he stroked a low finish into the far corner. Guardiola clenched both fists.

It was the perfect start but Wolves replied four minutes later when Leander Dendoncker capped a fine counterattack. Raul Jimenez powered forward from halfway before spreading the ball wide. City’s makeshift backline did not cover themselves in glory. The 37-year-old Fernandinho, who partnered Laporte at centre-back, could not prevent Jimenez from finding Pedro Neto and he centred for Dendoncker to coolly finish.

It would have made pleasing viewing for Bruno Lage, who, together with his brother and assistant, Luis Nascimento, and Tony Roberts, the goalkeeping coach, was watching on a couple of miles away at Wolves’ training base, as the trio continue to test positive for Covid‑19. Guardiola retreated to the away dugout and glugged some water. He did not need to fret.

City regained the lead when the purring De Bruyne leathered in from close range, after the Wolves goalkeeper Jose Sa presented him with the ball on a plate after failing to deal with his clever pass through for Sterling. Wolves struggled to break City’s endless chain and De Bruyne completed his hat-trick without breaking sweat.

The thing about De Bruyne is he makes it all look so easy, merely par for the course. With 10 minutes of the first half to go, the game as good as over, he went haring after the ball, on a one-man mission, ready to prey in case of a Wolves slip in defence.

There was the odd scare – Zinchenko and Fernandinho were thankful for the referee siding with them after tussles in the box in each half, while Laporte raced back to pilfer the ball as Jimenez surged through towards Ederson – but this was an otherwise pristine performance from City, all in white.

Inevitably, it was De Bruyne who would score City’s fourth. Foden’s cross forced a panicked clearance by Ait-Nouri and De Bruyne was on hand to slot in. Ederson made a fingertip save to deny Jimenez moments after Foden rattled a post, but Sterling tapped in a fifth to condemn Wolves to a fourth defeat in five matches. For City, there is simply no let-up in this race.