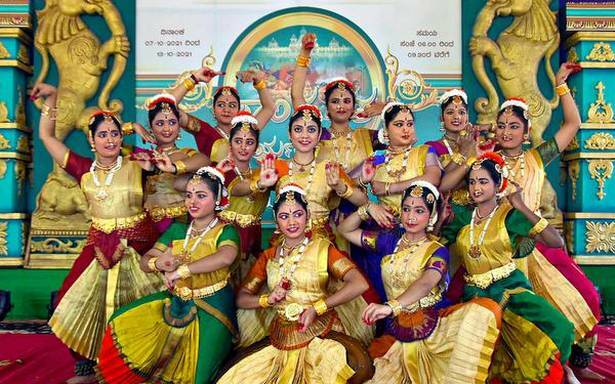 A slew of artistes performed at the dawn-to-dusk cultural programmes held on the Mysuru palace premises as part of Dasara on Sunday.

The event commenced at 6 a.m. and concluded at 5 p.m. Fifteen troupes entailing scores of artistes had rendered performances ranging from classical dance to music, vocal and instrumental. The programme commenced with Udayaraga which saw Nadaswara performed by 108 artistes.

The evening cultural programmes commenced after the dawn-to-dusk event. Though cultural programmes during Dasara are held at multiple venues, it has been confined to the palace premises this year due to the pandemic. During pre-pandemic times, as many as 120 to 130 cultural events spread over 12 venues would take place over the 10-day festival.

The cultural programmes are also a tribute to the contribution of the Wadiyars of Mysore who were great patrons of art, culture and literature. There is a legacy of eminent artistes of national and international repute performing during Mysuru and this includes the veritable who’s who of the Carnatic and Hindustani genre of music, besides eminent classical dance artistes.

This time around, however, the organisers decided to encourage only local artistes or those from Karnataka given the pandemic situation.