By Gabrielle Chan and Sarah Martin 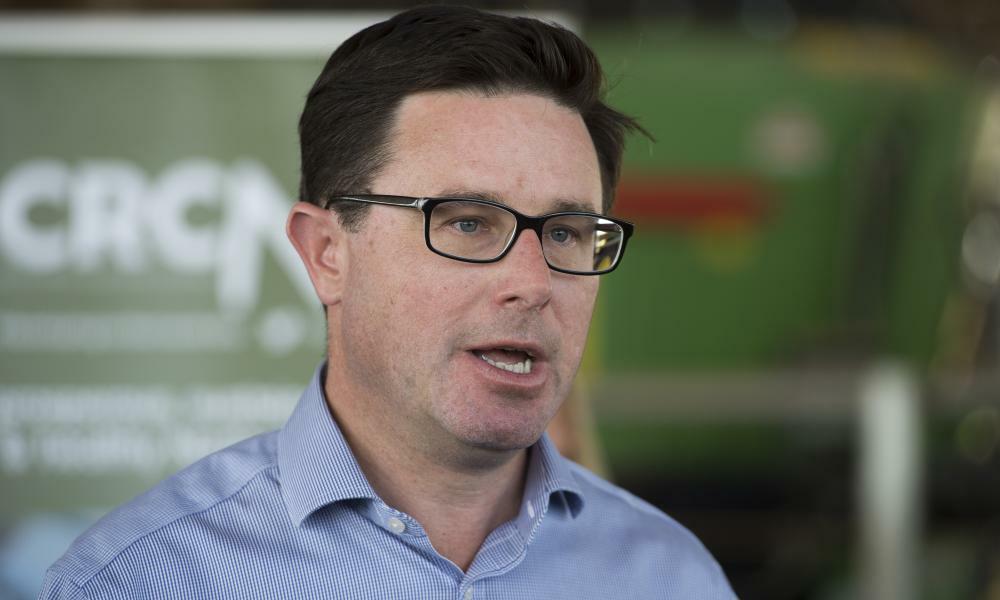 The federal agriculture minister, David Littleproud, has rejected demands from farmers for compensation for emissions reductions agreed more than two decades ago, saying the states should be responsible for compensating farmers over land clearing laws.

His comments came as internal negotiations intensified over the Morrison government’s climate policy ahead of the Cop26 in Glasgow with the National party meeting to discuss its position.

The government’s 10 member leadership team – along with the energy and emissions minister, Angus Taylor, and the resources minister, Keith Pitt – held a briefing on the policy options on Monday.

Prior to that meeting, the Nationals leader, Barnaby Joyce, said that he had been given “one look at the document” but MPs would be given an opportunity to discuss the proposed policy before finalising their position.

It will be considered by cabinet on Wednesday.

Nationals MPs are due to meet on Sunday ahead of parliament resuming on Monday, with expectations that Taylor will address the meeting.

As the Coalition negotiations continued, the Nationals withdrew an invitation to National Farmers’ Federation representatives to address the party room regarding their position ahead of Glasgow.

The NFF had demanded a reparation scheme of some sort to set aside a dedicated income stream for carbon sequestration to repay farmers for emissions reductions claimed as part of the Kyoto agreement in 1998.

Cabinet papers from the late 1990s documented how the Keating and Howard governments relied heavily on state laws limiting land clearing for most of their reductions leading up to Kyoto.

Liberal MP Warren Entsch has also previously confirmed the Coalition had “left the [fossil fuel] industry to emit largely unrestrained while farmers, pastoralists, and landholders picked up the emissions tab”.

While Littleproud has previously suggested farmers have done the “heavy lifting” on emissions reductions, he pushed back against NFF demands that farmers be compensated for reductions as a result of state clearing laws.

“It’s important for the NFF to understand the federal government did compensate for those land clearing regulations,” Littleproud said on Monday. “They were paid to state governments. So it’s actually the state governments that need to kick the tin to Australian farmers for that property right was taken away.”

Simson, who is one of the trustees of the Farmers Fighting Fund, upped the ante on the federal government by raising the prospect of farmers supporting legal action over land clearing laws over the removal of property rights.

“The Farmers Fighting Fund is there to prosecute laws and cases that it feels creates a national precedent so if such a case came forward – then I can’t speak on behalf of the FFF because I’m just a trustee – but I’m sure it would always be interested in considering a case,” Simson told Guardian Australia.

Previous land clearing cases by farmers have failed or been thrown out of court.

Simson said notwithstanding the NFF’s support for a zero 2050 emissions target, the NFF was raising the issue because farmers had borne the brunt of emissions reductions without transitional reparations.

“If there are transition arrangements being put in place for other industries for heavy emitters like manufacturing or energy or mining then it will rankle farmers even more to not have had any recognition about what happened in Kyoto.”

Joyce, backed the farmers’ federation call for compensation, saying “they should never have had their assets stolen off them in the first place”.

“It was basically like someone coming into your house and taking your television set or your fridge and just saying, ‘Oh, we believe we’re entitled to that’,” Joyce said.

“We can’t have that happen again. They should be compensated. It should never have happened to them in the first place. What other country just takes an asset off somebody and doesn’t pay them for it?”

When asked if the claim would be considered in negotiations over a net zero commitment, Joyce said it would be up to the Nationals party room to raise it as an issue, once MPs had considered the government’s proposal.

Joyce said at this point, MPs would then say: “OK, we’re on board, or we’re not, or we’ve got to make some changes to get us on board.”

“My job is try and corral that. At the end of the day, are you going to have them all on the same page? Not a chance. That would be ridiculous. We’re the freest party in Australia.”

For those Nationals who are supportive of taking action on climate change, there is concern that Victorian MP Darren Chester has indicated he will not attend the meeting, potentially weakening party room support for the policy.

The Victorian senator Bridget McKenzie – who has previously scorned the idea of net zero – flagged in an opinion piece in the Australian on Monday that locking in the commitment to net zero by 2050 was possible, but the consequences for regional areas needed to be mitigated.

“We want net zero economic impact in the regions. And we want that guaranteed,” McKenzie said.

She suggested that mandating investments in regional areas would help protect regional economies, and floated the idea of a legislated “regional socio-economic impact assessment mechanism” to permanently monitor the impacts of Australia’s emissions reduction strategies on regional Australia.

“For many MPs, this will be the most far-reaching policy decision of their careers, which is why it has been such a divisive political issue for so long. This is not about getting us to the next election, this is about what happens to our people between now and 2050 and beyond.”