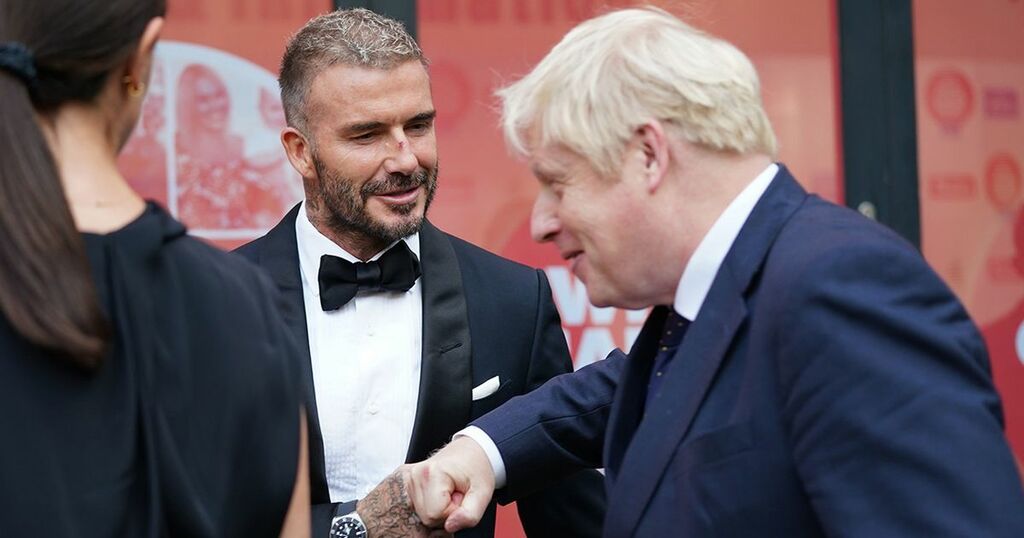 David Beckham greeted Prime Minister Boris Johnson with a fist-bump at an event on Tuesday night.

The former footballer and the politician were both guests at a star-studded party when they exchanged the social-distancing friendly greeting.

The 46-year-old sports star looked his usual handsome self as he worked the red carpet in a dapper suit - complete with a black bow tie.

Conservative Party leader Mr Johnson also donned a suit for the occasion - with his blonde hair ruffled for its trademark distressed appearance.

Former England captain David was joined by his mother Sandra Beckham as his plus one for the swanky awards do in London.

The 72-year-old looked as chic as her daughter-in-law, Victoria Beckham, as she posed for snaps with her son wearing a fitted black blazer and matching trousers.

The mother-and-son duo smiled for the cameras in their respective chic suits and took selfies with fans before heading into the venue in London.

David exchanged some friendly words and a fist-bump with the UK Prime Minister prior to heading into the ceremony that will honour NHS heroes.

Since the coronavirus began sweeping the nation back in March 2020, the retired footballer and his family have been full of praise and admiration for frontline workers.

The former Manchester United player and fashion designer wife Victoria were just two famous faces who encouraged the country to clap for carers on Thursday nights during the first national lockdown.

In July 2020, the dad-of-four wished the National Health Service a happy birthday, as the publicly funded healthcare system celebrated 72 years in service.

"Thank you for everything that you do today and every day."

The star also supported the One Million Meals initiative to feed front-line NHS staff & key-workers across the UK during the pandemic.

Earlier this year, the Prime Minister came under fire for his plans to give some NHS staff in England a 1% pay rise.

The Labour Party and a number of celebrities slammed the proposals released in March- claiming the government had gone back on a promise of a 2.1% pay rise.

Actor Hugh Laurie was one famous face to oppose the small raise, tweeting: "No no no. A 1% pay rise for nurses will not do."

"After all they’ve done. What a despicable kick in the teeth from the most self-serving government in our history," he wrote on Twitter.

"We should all be appalled."

It seems that the government considered the backlash from the general public and stars.

In July 2021 it was revealed that NHS staff would received a 3% raise instead.

"For the average nurse, this will mean an additional £1,000 a year, while many porters and cleaners will receive around £540," the government website wrote in the press release.