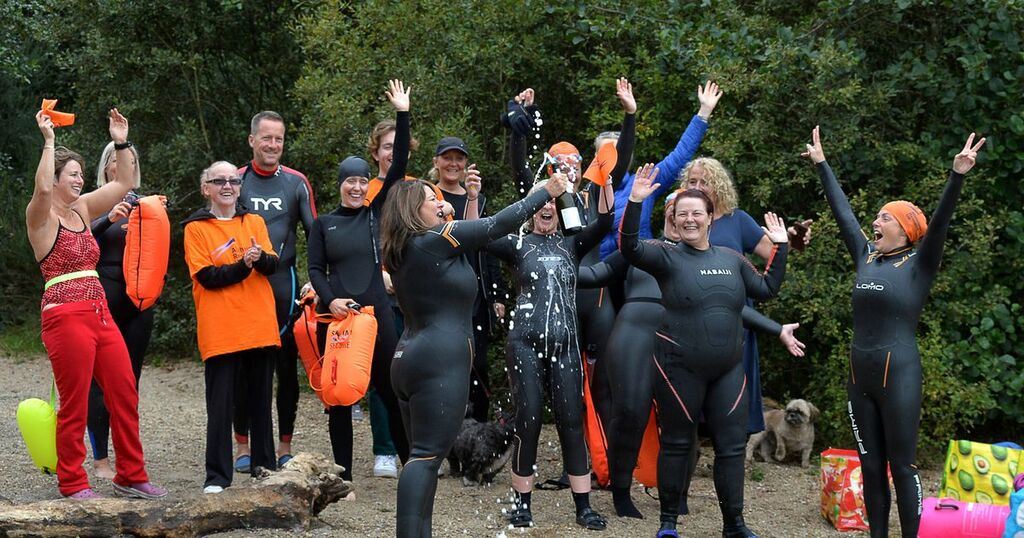 The daughter-in-law of a former Lennox Herald photographer raised over £1,500 for an Alzheimer’s charity after swimming to a Loch Lomond island in his memory.

Lyn Mitchell took to the chilly waters with around a dozen other swimmers to mark the second anniversary of David Mitchell’s passing.

The award-winning photographer was the first press photographer at the scene of the Lockerbie bombing and worked at the Lennox Herald for many years – charting the events of the area and lives of the people whose stories filled the pages.

The father-of-four sadly died in August 2019 from Alzheimer’s disease at the age of 80.

Lyn, of Jamestown, decided to mark the anniversary with a special fundraiser for Alzheimer’s Society after taking up open water swimming during the lockdown.

She said: “One of the instructors at the Vale of Leven Swimming Pool encouraged me to get into it and it went from there.

“There’s a group of us who regularly swim together now.

“A lot of them are very experienced so I set up my own group called Fish Eggs and Tadpoles for beginners, which has been great.

“I decided I wanted to do a fundraiser in David’s memory and a group of us swam to Inchmurrin on August 29 – one day before the anniversary. It was a wonderful day.

“There were around 12 swimmers and we also had a few paddle boarders and kayakers, including my husband Jeff.

“We went over to the island and then swam back before having a wee toast to David on the beach.”

Lyn told how David was diagnosed with the devastating disease when he was 78 – shortly after a fire at his home in Balloch.

She said: “We think the trauma of that brought it on.

“A few months after the fire, we noticed his memory was going and he was repeating himself and asking the same questions over and over.

“Within a year, he was forgetting people.

“The deterioration was very fast which was very difficult.

“I really wanted to do something in his memory for charity and I’m really happy with how it went.

He later went onto form a new agency in Glasgow, MacPhoto, and branch on to the national and international scene.

His photographs of the Lockerbie devastation appeared in newspapers across the world, with one winning him the title News Photographer of the Year.

His son Jeff, Lyn’s husband, walked into his father’s footsteps and is also an acclaimed press photographer, whose striking images have seen him pick up prestigious
accolades.

Anybody wishing to donate to the fundraiser can still do so by visiting www.justgiving.com/fundraising/lyn-mitchell1