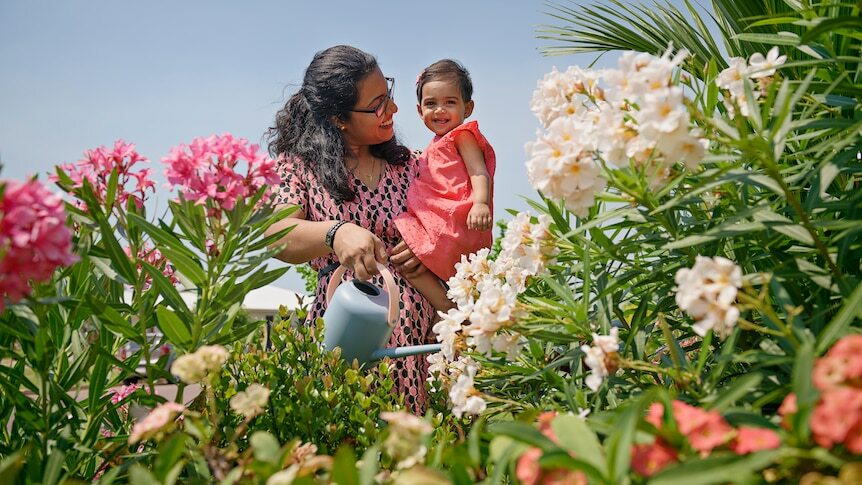 Darwin residents are using less water at home than ever before as more home owners find ways to cut down on their usage, new data shows.

Over the past decade, residential water use in Darwin has plummeted 30 per cent, from an average of 450,000 litres to 359,000 litres per household per year.

Most of those savings have occurred in the garden, where residents use up to 60 per cent of their household water, according to Power and Water estimates.

Hazel Joseph — who lives in Muirhead in Darwin's northern suburbs — said she became motivated to minimise her water use after discovering the NT battled significant shortages.

"When choosing our plants to put in our garden, we wanted to be eco-friendly, so we went for the hardy plants, the native ones which don't require as much water," she said.

"We've got some plants like pendas, mimusops elengi — the street elegance variety — and we've also got desert roses, which don't require as much water."

Father-of-three Chris Kempton — who lives in Rosebery near Palmerston — is among the growing group of Territorians limiting their water use.

"Everyone wants to have a nice, green garden, but we need to be sensible about it."

As part of the service, a professional irrigator assessed his sprinklers and reprogrammed his water irrigation schedule to be more efficient while using less water.

The changes have reduced Mr Kempton's water usage by a quarter and are expected to save his family about $400 in water bills.

Taking advantage of Living Water Smart's irrigation audits is one of the smartest ways to cut back water use in Darwin, according to Power and Water's senior demand and developer services manager, Kylie Climie.

"The program has been running solidly for about six or seven years," Ms Climie said.

"We've previously had a very water-intensive garden because it's very green and lush and we also grow a lot of tropical fruit," she said.