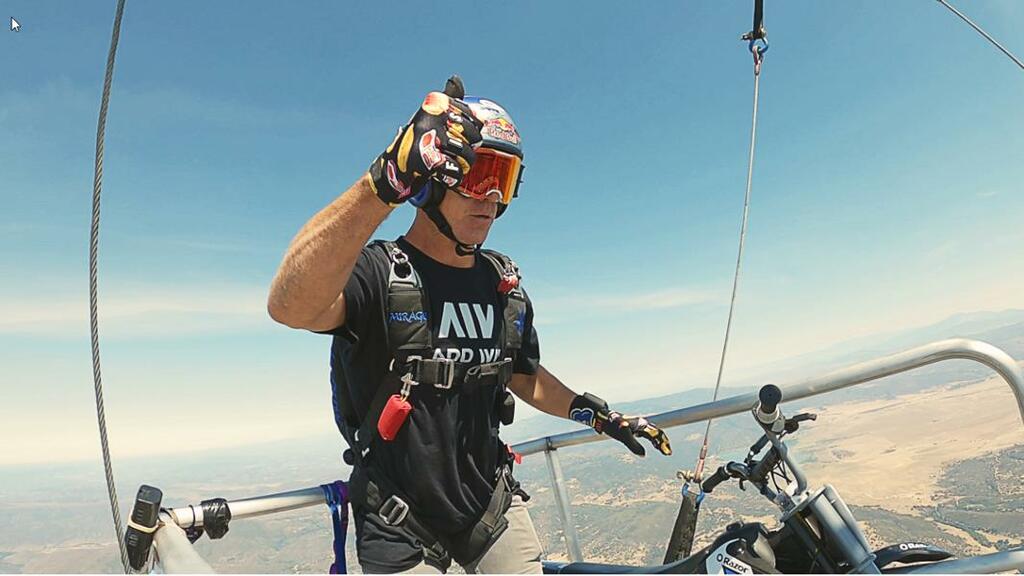 What drives a daredevil to keep pushing himself, attempting higher, longer, faster, more extreme feats? It’s a question Aussie Robbie Maddison, 40, has been pondering during a transitional period in his career—one that has seen him nab numerous world records, including breaking his own for longest motorcycle jump, traveling 350.98 feet on his bike in 2008.

But for his latest, jaw-dropping feat, Maddison took some inspiration (and a challenge) from his young sons, Kruz and Jagger.

In a new video from Razor that just debuted today, Maddison and his sons tool around a dirt course, father doing a backflip to impress his boys. But Kruz and Jagger aren’t impressed by merely one backflip. They motion for him to try two—no, three—no, four. They want to see a quadruple backflip.

Then, Maddison looks to the sky, and his newest, gravity-defying stunt is born.

Maddison has set his newest world record not on dirt—nor water, a popular place for him lately with his modified water bike—but in the air. With a helicopter hoisting a steel ramp he designed and built 5,000 feet in the air, Maddison rides his bike down the ramp and into a freefall, completing a quadruple backflip before he kills the bike and deploys his parachute.

It’s a stunt you just have to see for yourself:

“It’s my greatest stunt,” Maddison told me. “I’m super proud of it. There was a different element, having my kids involved and showing them you’re able to achieve things if you go about them the right way.”

Maddison made his name in the world of freestyle motocross, competing in multiple X Games. He took gold at X Games 2004 in Australia's Wonderland after completing 13 backflips and won silver in 2010 for best trick.

He won multiple other FMX events around the world and soon turned his focus to stunt performing, setting two world records in May 2005 with the Crusty Demons motorcycle stunt group, traveling 221 feet on a 125 cc bike and 246 feet with a Superman seat grab on a 250 cc bike. His aforementioned 2008 record of 350.98 feet still stands—though plenty are taking a shot at it.

In recent years, however, in the interest of his health and preventing head injuries, Maddison has pulled back from FMX and focused more on water-based stunts, as well as pilot training and skydiving. “I’ve been dead five times,” Maddison says. “In 2015, I had a traumatic head injury and died on the front yard of the house in front of the kids, traumatizing the whole family. I dealt with a lot of depression after that. I had to get my mojo back. Skydiving really saved my life. It gave me the same exhilaration I got from motorcycles, but skydiving seems kind of safer than freestyle motocross.”

Razor knew that it wanted to work with Maddison on a project, but it deferred to him as the mastermind to develop it.

“We couldn’t have dreamed this up ourselves; Robbie came up with this tremendous idea and the next thing you know, he was building a ramp and testing it in his backyard,” said Alexis Trevino, RAZOR USA’s senior director of global marketing. “He’s a daredevil in the purest form, but he’s also really careful and got the right team and he really thought about this and planned it all out. It wasn’t just, ‘We’re gonna jump out of a helicopter now;’ it was months of planning.”

All the preparation paid off; the entire jump was filmed in just one take, resulting in the destruction of only one Razor bike. Prior to actually taking the bike up, Maddison got reps jumping out of the plane and out of a hot air balloon and doing backflips without it. He also hung the ramp above his foam pit and practiced doing a backflip into it—and promptly tore his calf muscle.

“The ramp was too steep,” Maddison explained. He needed to remove the last three feet; the length of the ramp was generating too much g-force.

Maddison never practiced riding the bike off the modified ramp from that height, but he went through all the other steps in the process and perfected it before going up in the helicopter. On the day of the stunt, however, there was one anxiety-inducing surprise.

As you can see in the video, to get the shot of Maddison launching off the ramp, prior to then following him in the air, skydiver and award-winning sky filmer Sean McCormack climbed onto the underside of the ramp—unstrapped. McCormack’s weight tilted the ramp on an angle. “He was like, ‘Go! Go!’ and I was like, ‘I can’t! It’s on an angle!’” Maddison recalled. Trying to ride down the ramp at an angle would have prevented him from being able to do the backflips at best and been disastrous at worst.

Maddison shifted to the left, McCormack moved to the right, and as Maddison took off down the ramp, McCormack let go, straightening the ramp just in time.

“That was the only thing that happened in the moment at 5,000 feet,” Maddison recalled with a chuckle.

After all, Maddison says, it’s not just about the stunt, performed in a vacuum; the filming crew and production are what bring it to life. “Capturing it and the editing was just as important as the performance,” Maddison said.

So, back to the original source of motivation: were the Maddison boys impressed with their dad’s jaw-dropping quadruple backflip in the sky?

“They’re proud of Dad regardless,” Maddison said. “Where I’m getting pushed my them is to be the best father I can be. Being a father is the biggest challenge I’ve ever faced as far as being consistent and being accountable, and ultimately your kids get to the level of how much you put into them.”

For Razor, working with Maddison was a no-brainer; having the rest of the Maddison clan involved was what really took the project into another stratosphere.

“We really wanted to show Robbie in his pure form, but also the human side of Robbie, him in his own element, being a family man, a really inspiring person with tons of records and just a fantastic human being overall,” Trevino said. “Showing him and his family was a showcase to do these epic things. We all have a little bit of epic within us; you need a support system and people encouraging you to do great.”

As for what’s next? Maddison isn’t ready to share specifics, but “you can bet your bottom dollar plans are in place,” he said. “I’m very excited for the future.”