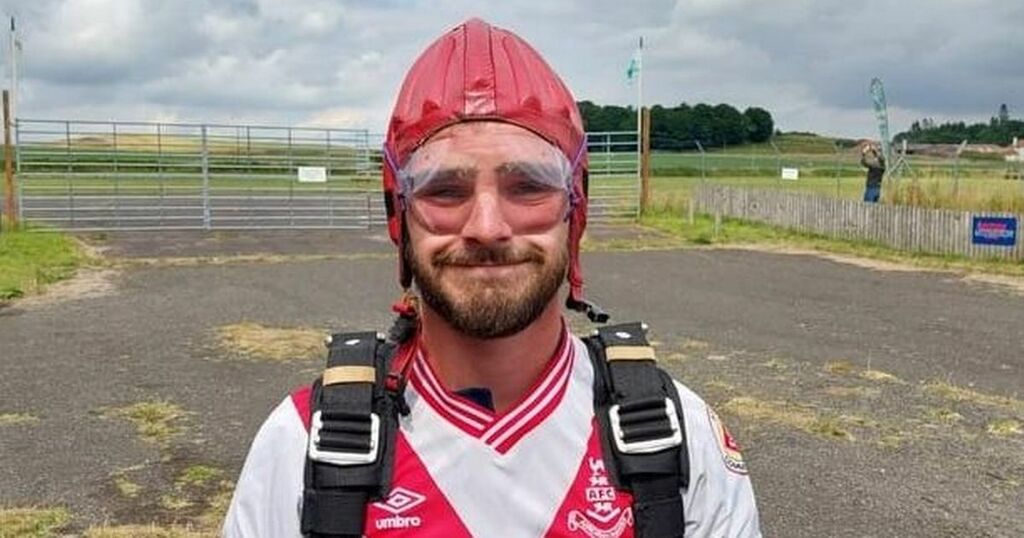 A fearless football fan raised nearly £1000 for the work of a supporters’ charity by taking on a skydive from 10,000 feet.

Darren Pryde realised a long-standing ambition as he took the leap of faith by completing the freefall at a centre in Fife, and has donated the sponsorship money to Diamonds in the Community for their baby and family clothing aid project.

His bumper cheque for £950 will help the charity to pay the rent for nearly four months at their new premises in Airdrie town centre, where they collect and distribute baby items ranging from clothes and toiletries to toys and even cots.

Airdrie fan Darren took the plunge after being treated to the skydive as a gift from fiancee Katie McIntyre, and decided to use the memorable experience to help raise funds for the good cause.

The PE teacher, who plays cricket for Coatbridge side Drumpellier, told Lanarkshire Live: “I’d been going on about doing a skydive for ages so when I got this as a Christmas present, decided to raise money for charity through it too.

“I’d done a wee bit with Diamonds in the Community through the cricket club when they’ve been raising money and I know their fundraising manager Dougy Allsop from Airdrie games, and I know about the good work they do with foodbanks and collecting baby items.

“The skydive was really good and I’d definitely do it again. The best part was the freefall for the first 15 or 20 seconds; I was just laughing like I was on a rollercoaster and it was a great thrill.

“I wasn’t overly nervous, which I’d thought I would be, although I was sitting right next to the door of the plane and I did expect it would have been shut, but it stays open all the way up!

“You’re strapped to the instructor who tells you when to jump, and after the freefall when the parachute is set up, you get the chance to steer which is really good.

“I was chuffed to have done it and there’s a sense of achievement; I had a number of family members there watching too which was great, and it was brilliant to be able to raise so much money for charity.”

Darren handed over his cheque for £950 – almost quadruple his original target – on a visit to Diamonds in the Community’s new base, and now plans to continue supporting the organisation’s work.

He said: “They invited me along to see their facilities and it was really good; I couldn’t believe how much they’re involved in and how much stuff is being dropped off.

“What they’re doing is brilliant and it’s great to know there’s a direct benefit from the fundraising to help cover the rent for a few months; my fiancee and I are also going to go along and help out as we’re keen to get involved.”

Grateful Diamonds in the Community volunteers said: “Massive thanks and congratulations to Darren on his sponsored skydive, and we’re hugely indebted to him for choosing us as his nominated charity.”

Meanwhile, the group also received a royal seal of approval as they received a special thank-you from Lanarkshire lord lieutenant Lady Susan Haughey, the Queen’s representative in the county.

She contacted various local good causes to thank them for their efforts during the past year, and wrote to the Airdrie group: “I would like to thank you all for the wonderful contribution you have made during these extraordinary and difficult times.

“It has been heartening to see so many people coming together to help others in their community; it has been a great help over this very difficult year.

“The collaboration, courage and selflessness shown by volunteers across the county during the Covid-19 pandemic has been truly inspirational and uplifting.”

Fundraising and partnerships manager Dougy Allsopp said: “We’re delighted and humbled to receive this recognition – as a charity, all we did was harness the spirit and willingness of some amazing local volunteers who were keen to help others during an unprecedented time of crisis.

“There were many other local organisations who joined forces to help the vulnerable in our society, and we are delighted to see so many of them honoured at the same time as us.”