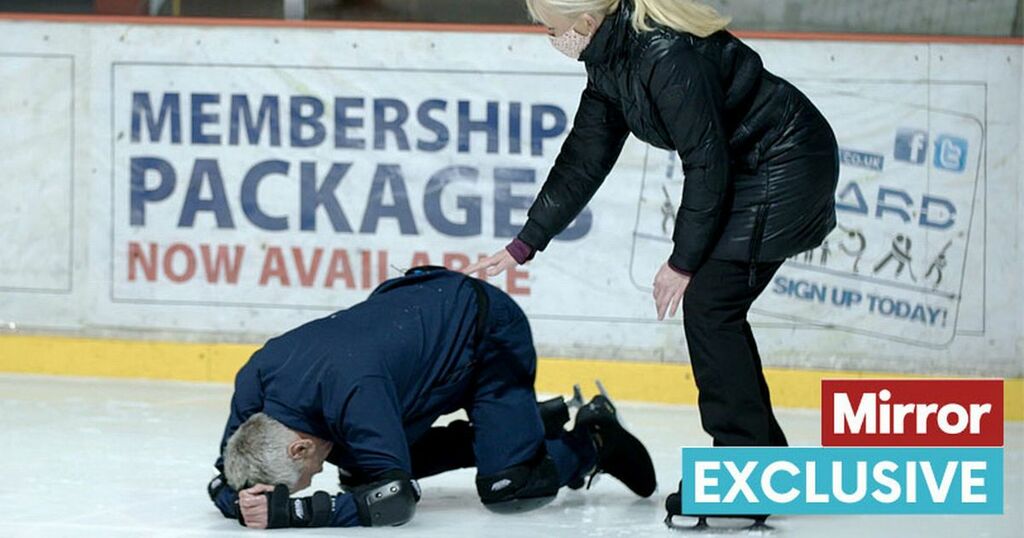 This is the horrifying moment Happy Mondays star Bez is left dazed after smashing his head on the ice during training for Dancing On Ice.

Our dramatic footage shows the star slipping backwards and crashing to the ground - sending his helmet flying.

As Bez lies stricken on the floor, his dance partner Angela Egan races over to him to check he is ok, telling him: “Give yourself a minute.”

The pop star goes to get up but slumps back down onto the ice.

A show source said: "It was a terrifying moment and everyone's hearts were in their mouths when he hit the ground. It goes to show how brutal this programme can be."

News of the horror smash emerged earlier this week after show host Phillip Schofield revealed he had seen some footage of the fall.

Phil said: “You have a rink that is full of essentially blades and we know how dangerous they can be and how deeply they can cut and how sharp they are. I’ve just watched a video of Bez on his second day fall over backwards so hard that his helmet flew off.

“Dancing On Ice is really dangerous.

"They really all risk everything for it. We’ve seen in the past that people do get hurt and of course you want to avoid that at all cost. I think we will be wrapping Bez up in bubble wrap that’s for sure.”

Bez revealed earlier this week how he had never watched the ITV show, which kicks off this Sunday.

And he said how he had been trying to up his fitness to prepare for the series.

He said: “I’d never watched it before but I watched a little bit of last year’s because I was thinking of auditioning. I had a quick look to see what it was all about.

“First of all I’m excited to learn a new skill because at the moment it’s like Bambi on ice rather than skating on ice. And fitness is important to me. I’ve been keeping fit this past year. So this keeps my fitness going and it’s another challenge.”

But he admitted he was hopeless on the ice. Asked if he had skated before, he replied: “Not really no. A little bit at Christmas time but honestly I’m so bad on the ice. But I can’t wait until the ice rinks are open next Christmas time and I’ve got these fancy Cuban heeled boots. I’ll be on the ice skating backwards, I won't be holding onto the penguin any more.”

Quizzed about what he was most looking forward to about learning to skate with a professional partner, he replied: “Well I hope to become quite skilful at it.

“I don’t know what level of skill I might get to but it would be so nice to do well and it’s something I could then do in the future. I’m really looking forward to actually dancing with a partner on ice. Not actually something I ever imagined doing in my life.It’s a bit different from raving.”