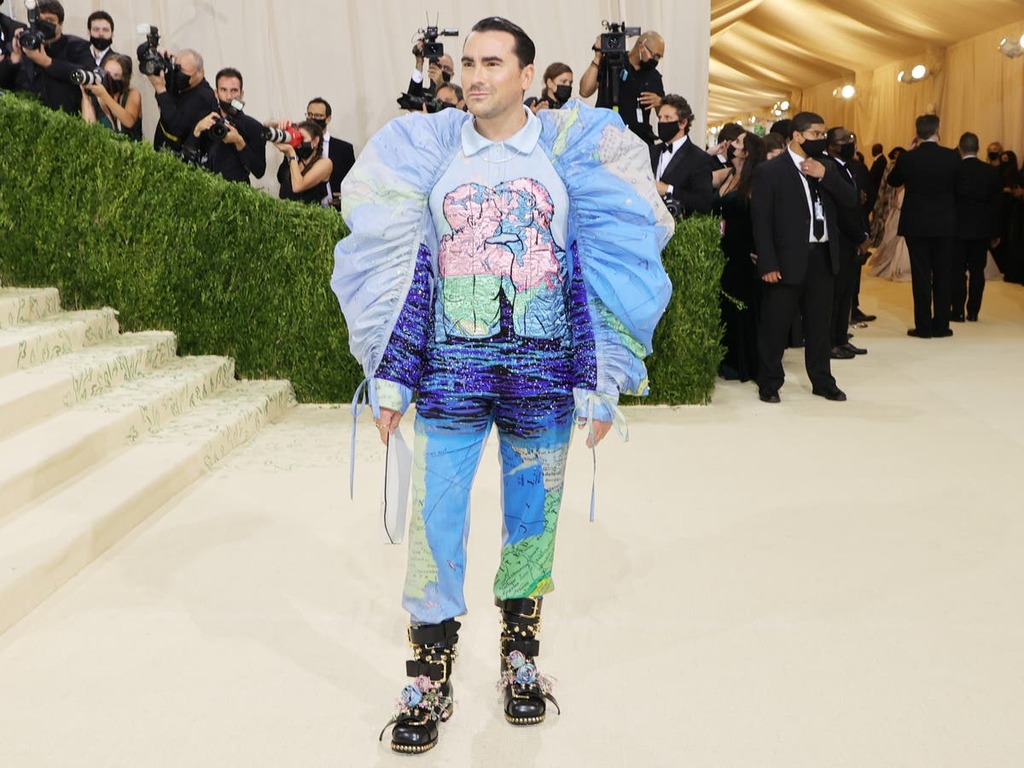 Dan Levy made his debut at the 2021 Met Gala with a flamboyant costume containing an important message.

The Schitt’s Creek star collaborated with Loewe’s Jonathan Anderson and Cartier to create a look that not only turned heads, but was politically powerful.

The 38-year-old multihyphenate stepped on the red carpet in an outfit comprised of pastel blue, pink and green shades, dramatic puffed sleeves, a world map print, beading and an hand-embroidered portrait of a queer couple kissing in the centre of his chest.

Inspired by the Costume Institute’s “In America: A Lexicon of Fashion” exhibit and the gala’s theme, Levy worked with Anderson to create a costume that celebrated “the resilience and the love and the joy” of the LGBT+ community.

“I had asked Jonathan if he would be into dressing me just because…I just love his perspective on fashion and thought that he’d be a really great person to collaborate with on this,” the actor told Vanity Fair.

“He’s so thoughtful, unexpected, and artful in his approach to what he wants to say with the clothes that he designs…. fortunately, he said yes, and fortunately he did have some great ideas.”

“Jonathan and the design team built upon an image of two men kissing from Wojnarovicz’s work, F*ck You F*ggot F*cker, named after a homophobic cartoon the artist had come across.

“But rather than feed on the message of hate, we wanted to celebrate queer love and visibility - acknowledging how hard artists like Wojnarovicz had to fight, while also presenting the imagery in a way that offered a hopeful message.

“Tonight, we’re celebrating the resilience, the love, and the joy of the community while honoring a crucial American voice that was taken from us too soon.”

The comedian added that Loewe had made a donation to Visual AIDS, an organisation Wojnarovicz supported, that continues to promote AIDS awareness and education, adding that “there’s a lot more that needs to be done [in terms of LGBT+ equality].”

He said: “Through his comedy, he is able to knock down cultural barriers. We wanted to make something that allows him to make queer love visible and we found that through the seminal works of David Wojnarowicz.”

Levy added: “Jonathan described [the look] as a superhero for the community, and when I put it on, I definitely feel that.

The Canadian native admitted that attending the star-studded event was “a big step out of his comfort zone”.

“I’m a pretty introverted person, and I tend to avoid big parties,” he revealed.

Despite his nerves, Levy acknowledged that his iconic Schitt’s Creek Character, David Rose, would be absolutely ecstatic at the opportunity to attend one of the fashion world’s biggest events.

“Absolutely nobody would want a Met Gala invitation more than sweet David Rose. Just desperate for it,” Levy said.