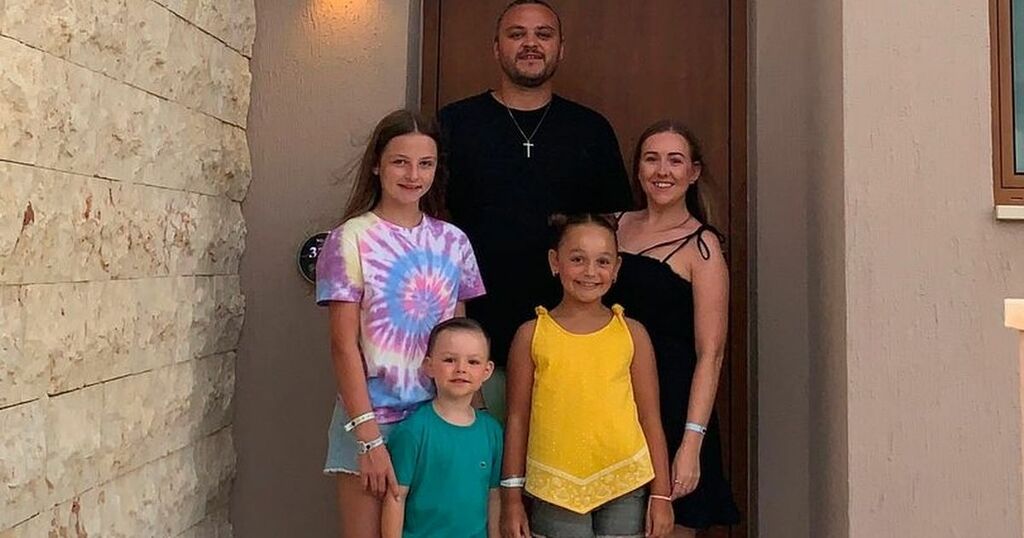 A dad has told how his "tight-knit" family has been left with a logistical headache due to the "insulting" decision that his son cannot go to the same primary school as his step-sister because he is separated and the sibling connection is ignored.

Dan Roberts, 35, from Ellesmere Port, said he feels that he is being discriminated against because he shares custody of his two eldest children with his former partner.

Last year, when he applied for a place at the school for his youngest child, Koa, now four, their application for a sibling connection to be taken into account was refused by Cheshire West and Cheshire Council.

Dan said he shares 50% split custody of his two eldest daughters, who spend an equal time at both parents' addresses, but because their mum collects the child benefit the local authority refused to accept a sibling connection between his son Koa and daughter Raya.

He describes it as "ludicrous" given only one parent can claim the benefit.

Despite numerous appeals to the local council and the ombudsman, Dan's attempts to get his son into Meadow Primary School remained unsuccessful and he is now calling for a change to what he says is an "unfair" policy.

Dan told the Echo: "It's been five months of absolute stress since we got the news in April.

"I have three children, two daughters from a previous relationship and one together now with my partner.

"My first daughter Shiloh started at Meadow Primary school in Ellesmere Port in 2012 and is now in high school and my second daughter Raya started in 2016 and has gone into year five this year.

"We applied for a place at the school for Koa, who had been at the preschool and we were keen for him to go to the same school as his sister.

"Because my ex partner and I share 50/50 custody of our daughters, their mum's address and my address are both down for Raya at the school.

"Our access is split completely down the middle and when we applied we explained the situation that Raya lives at both households.

"Back in April we received notification that my son Koa's space had been declined on the grounds of distance and they wouldn't give him sibling criteria because his sister has her mum's address as that is the address they took into account.

"When we tried to explain she lives at both addresses they said they were taking child benefit into account and the address that gets paid to and that's the way it is.

"It's not fair - it's discrimination as only one parent can claim even if you split it between you once you've claimed, it can only be one parent who does.

"It's an unfair criteria but they were having none of it so we took it to appeal and provided all the evidence, but this was declined in appeal.

"Obviously we were devastated so then we complained to the ombudsman but because that is the council policy, they said they were right to go off that criteria.

"We were told by the council they review the policy every 12 months but I say why has it taken this to highlight a problem that surely other families must get with a 50/50 split.

"In this day in age it is quite common for families to be separated and have children living in split families, I want to highlight this as it needs changing for others.

"My problem is, how are the council sitting down and deciding to make it come down to child benefit, who thinks this up and says it's a good idea when only one person can claim it?

"And if it is so rare, then why couldn't it be classed as exceptional circumstances? It feels like an absolute kick in the teeth.

"We're a close knit family and walk to school and back every day a mile, we were looking forward to doing that as a family and we can't do any of that now.

"It's caused all kinds of logistical problems, having to change hours and locations and get grandparents running around collecting children.

"He should be at his school with his sister, going through the playground they've all been through. He was the only child in his preschool who didn't get offered a place of 30 and it's a year group of 60.

"Our family have been going there for nine years altogether and it's going to be a knock on effect if my partner and I have more children, with my daughter being off to secondary school in the near future, there will be no more link to Meadow Primary."

Dan says that while his son has now been placed on a waiting list, and he is currently at the top of the list, with term having started and him joining a new school, the "damage has already been done" in "unsettling" Koa's start to school.

He says he also feels insulted that his children aren't being classed as siblings.

He said: "To be told your own kids aren't classed as brother and sister it makes you sick.

"His sister wanted to be going with him and was excited for it, with them being so young, they take stuff on the chin, but it isn't the point - it should not be happening to families like this.

"We can't be the only family facing this, the policy needs changing."

Dan says he has received "brilliant" support from his local MP Justin Madders who has kept in touch with the family.

A spokesperson for Madders said: "The policy fails to appreciate the negative impact both practically with school drop-offs, sports days and plays but also on a four-year old boy who will now not be able to attend the same school as his sister."

Cheshire West and Chester council cabinet member for children and families, Cllr Robert Cernik, said: "The council is unable to comment on individual cases, however all school admission applications are processed in line with the relevant admission authority’s published admission arrangements.

"Where a school place is refused the applicant has the right to appeal.

"An independent admissions appeal panel then review how the application has been processed, including consideration of the child’s personal circumstances.”