Dad feared he would die after being bitten by spider 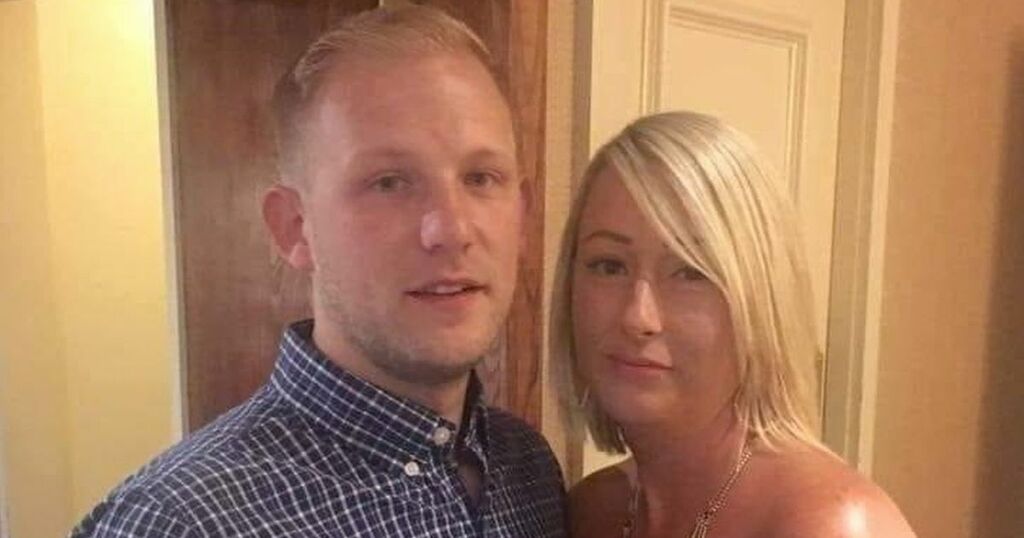 A dad feared he would die after a false widow spider bite left him battling sepsis in hospital.

When football coach Lewis Alp first noticed a pea-sized blister on his ankle on July 18, he put it down to his trainers rubbing in the heat after training his under-9s team.

But over the coming days the 31-year-old woke up drenched in sweat, feeling feverish and struggling to walk, leaving him suspecting he might have caught coronavirus.

READ MORE: Little girl, 6, in coma after fireplace fell on her in family living room

It was only when four blisters bubbled up on his foot and he was left crying trying to walk down the stairs a week later, that his wife Chantelle, 36, ordered him to go to A&E.

At the hospital, concerned staff ran blood tests and hooked the dad-of-three up to an antibiotic IV drip.

Shocking photos show how the dad's ankle ballooned into a giant wound with a black 'slug-like' shape.


Lewis, from Bradwell, Norfolk, said: "For a day or so I really thought I wasn't going to make it.

"Even now I look back and it's quite traumatic.

"Chantelle says I've changed, I do find my mood has been affected by it.

"I wouldn't say I'm depressed but it's hit me more than I would ever have imagined, it was a really scary time."

Lewis, who is dad to Indie, seven, Harley, eight, and stepdad to 16-year-old Taylor Dranfield, was training on an artificial grass pitch in Lowestoft, Suffolk, on the Sunday afternoon and returned home as usual without experiencing any discomfort.

He spotted a tiny white blister but shrugged it off believing it to be caused from wearing ankle socks and trainers in the heat.

Lewis said: "I train my son's football team. We were out on an artificial pitch in Lowestoft and I was fine then.

"I didn't feel anything bite me, that evening I just had a tiny blister that felt a bit itchy for a day then disappeared.

"I thought it might have been caused by my trainers rubbing as it was a really hot day.

"In the early hours of Tuesday morning I had hot sweats in bed, I felt feverish a little bit and was sleeping quite a lot.

"The next day I slept most of the day on and off and was taking paracetamol on a regular basis.

"I had aches and pains including backache. I remember thinking 'I've had both jabs and I've gone and got covid'. I kept doing lateral flow tests every day for a couple of days, so did my wife, but - nothing.

"I never thought it could be related to a small blister that had by that stage disappeared."

By Thursday, Lewis's ankle felt very stiff and he was struggling to walk pain-free.

Lewis said: "When I woke up on Thursday morning it was more painful to walk on and that's when there were visible signs that something wasn't quite right.

"There were four what looked like blood blisters that were black and swelled up. I was finding it quite difficult to walk and put pressure on.

"I'd had a blister on the back of my heel and I just thought 'oh it's maybe something to do with that'. I'm not one to make a meal out of things, I didn't really think anything of it."

When the pain worsened causing Lewis to cry on the Saturday, Chantelle put her foot down and ordered him to go to hospital.

Lewis said: "When I woke up on Saturday morning I couldn't walk properly, I was in tears from the pain.

"That's when my wife, who doesn't drive, called my mum [Angie Bennett] who took me up to A&E at 9am.

"They were very busy but I was seen very quickly after the general assessment. They asked me if I'd seen what had bitten me and I said 'no' and explained the situation.

"Straight away they gave me IV antibiotics, I passed out as I'm not a great lover of needles."

While Lewis was in James Paget Hospital in Great Yarmouth, Norfolk, doctors ran blood tests and drew lines around the infected site to check for tracking marks.

They also put a compress on the cluster of blisters that had merged into one swollen lump to try and reduce the swelling and sent him home with antibiotics, saying they wanted to see him the next day.

But just 30 mins after he'd been discharged, doctors urged him to return straight away as his blood results showed a dramatic drop in his white blood cell count.

Lewis said: "I was home about half an hour and I got a phone call from the consultant I'd seen.

"He said all my other bloods had come back ok but one that'd just come back said 'you've virtually got no white blood cells and it's critical that you come back.

"'If you were to pick an infection up it could be life-threatening as your body can't fight it'.

"I started panicking when I heard that. They said I'd be in hospital for possibly three or four days so they could understand why my white blood cell count was so low and to get the infection under control.

"Chantelle was quite distressed and the kids didn't really understand. I just explained that I was poorly and that I needed to go get some medicine to make me better."

Once Lewis was re-admitted into hospital he was given antibiotics to tackle the infection and medicine to boost his white blood cell count.


Lewis said: "I was on two types of IV antibiotics to treat the sepsis I had. Doctors said that I was neutropenic - my white blood cell levels were extremely low.

"I think I was having such a severe reaction because my body couldn't fight the infection.

"With sepsis being the worst sort of infection you can get and my body not fighting it, that's why it got even more severe.

"At midnight on Saturday doctors gave me an injection in my belly, which I thought was a blood thinner but it turned out to be something that chemo patients have to boost their white cells.

"I was also having blood tests daily to monitor my levels and other tests to try and identify what I'd been bitten by."

When the pea-sized blister erupted into a black 'slug-like' shape on Lewis' foot a consultant said his test results suggested a false widow spider bite was behind his illness.

Lewis said: "The consultant came and saw me, had a look and said it's extremely likely from results they had that it was caused by a false widow spider.

"At this point the blister was like a slug and was very big.

"They kept me on IV antibiotics, I had another two or three stomach injections along with blood thinners as well.

"When I'd asked how severe it was, a doctor told me that if I picked up any infection it could turn extremely bad very quickly to the point of ventilation - that's what really scared me.

"While I was in hospital I was only allowed one visitor for an hour and it had to be the same visitor every time because of the potential of me picking up an infection up because of the neutropenia.

"When Chantelle visited I wouldn't kiss her because I didn't want to pick up an infection.

"My little boy, who's only eight, was really quite distressed. He genuinely thought I was going to die."

Four days after he was admitted to hospital Lewis was allowed home with antibiotics and the following day the blisters burst - causing yellow pus to ooze from the wounds.

Lewis said: "I was home a day when it burst, which left quite a mess. Once the wound burst I contacted the doctors and they booked me in to have it cleaned, dressed and changed.

"I was seeing them every two days, I'm still seeing them now, but now it's every three days, it's been quite a while."

Not only was Lewis knocked sideways by the sepsis and neutropenia, but he also suffered with terrible bouts of sickness caused by the antibiotics, struggling to keep food down.

Sporty 5ft 10in Lewis, who weighed 12st 7lbs before his ordeal has lost 2st, meaning he now weighs 10st 7lb - the same weight he was when he was 18 years old.

Now two months on from his ordeal, Lewis is sharing his story to warn others of the potential dangers of false widow spider bites.

Lewis said: "Be careful of these spiders, definitely with children. The amount of damage that I had is scary but real."

Lewis is now more wary of spiders and plans to wear knee-high football socks in a bid to protect himself from any future bites.