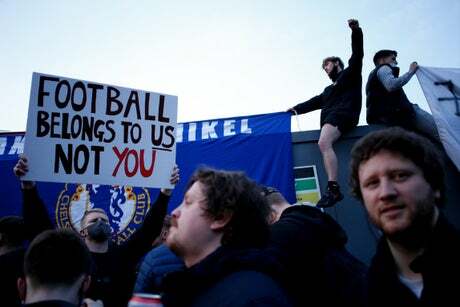 Crystal Palace co-owner Josh Harris does not expect the European Super League project to be resurrected because those involved now realise football is for the fans.

Earlier this year 12 European clubs, including six from the Premier League, attempted to launch a breakaway Super League.

It was eventually stopped within 72 hours of its launch as it was met with a furious backlash from supporters and football’s governing bodies.

Much of the outcry centred around the closed nature of the league, which would see its founding 15 members unable to be relegated.

The fan backlash was particularly vocal, with supporters protesting outside grounds to make their voices heard.

Harris, who is one of the owners of Crystal Palace, was against the idea and believes it will not happen again as those behind the project now realise football is about the fans.

“The Super League was a situation where a small group of owners forgot that the sport was ultimately designed for the fans around the various national leagues in football and soccer,” said Harris, who was speaking at the Financial Times’ Business of Sport US Summit.

“I think if people remember why they are in sports, which is for the fans, then it probably won’t happen again.

“We were very vocal at the time, and continue to be very vocal. It was designed to permanently install a small number of teams in a league that would have been the dominant league.

“So if you would have established this league, the Premier League and all the other national leagues would have been less important and we would have lost media dollars. That would have had the effect of disenfranchising some of the leagues and some of the smaller teams in those leagues.

“The fans and the local markets stood up and got very aggressive. It was over in a week or even less, 72 hours.”