AFL grand final parade sees Cats and Swans take to Yarra River, but not all fans get a view

The grand final parade has made its way through Melbourne, with a leg of the festivities taking place along the Yarra River for the first time, but not all fans have been happy with the display.

Players and coaches from both teams travelled by boat along the Yarra, disembarking at Birrarung Marr before making their way to the MCG by road.

However, some in today's crowd were left disappointed by their experience, saying they missed out on seeing the on-water section of the parade.

One fan, Milly, wrote on Twitter that she was among a large crowd who missed out despite waiting in a designated "viewing area", saying the boats had "turned around" way before reaching the spot.

Another fan, Sian Dart, said the boats turned around before they reached her.

"Those maps of the parade were full on deceptive for tens of thousands of people," she said.

It was estimated up to 250,000 people were set to take part in today's events.

Saturday's clash between the Swans and the Cats at the MCG will be the first premiership match held in the city since the beginning of the COVID pandemic.

Among those in Melbourne this morning is the divided Chapman family.

Sydney Swans fan Matt is convinced his team will take out the win.

The family bought tickets to the grand final six weeks ago.

"To have both our teams in the game is pretty special," Mr Chapman said.

He said it was great to have the grand final parade and the game back in Melbourne.

"Every time I dress in some sort of costume, we end up losing the grand final," he said.

The Swan hat he wore to the parade came to him after an internet search.

"It goes alright. It got a good reaction last week in Sydney," Mr Farrell said.

He said it got a bit trampled in the excitement of last week's win, so the hat's fate if the Swans win on Saturday is uncertain.

"Everyone is writing us off, which is what we like," he said.

The grandfather of Geelong star Patrick Dangerfield, Bob Utber, said he had never been so nervous in all his life as he is for Saturday's grand final.

"I've been a footy fan all my life and just to have a family member playing in an AFL grand final – it's just the height of being involved in football," he said.

He said it had been "tremendous" to watch his grandson's career unfold.

"He doesn't have to be best on ground."

The grand final festivities come as the AFL grapples with fresh allegations of racism.

A review by the Hawthorn Football Club has unearthed accusations that key figures at the club intimidated and separated young First Nations players from their families.

The AFL has committed to an external investigation into the allegations. 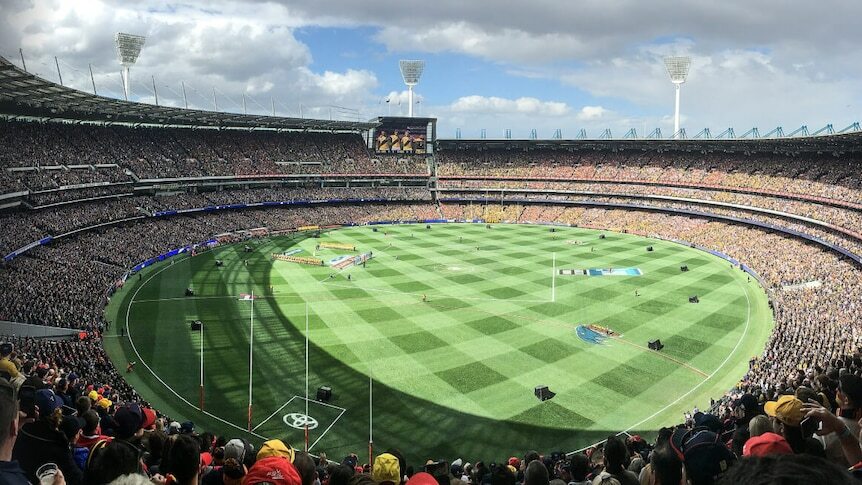 This decider, on return to a full house of 100,024 at the MCG after a two-year hiatus, was a famous…