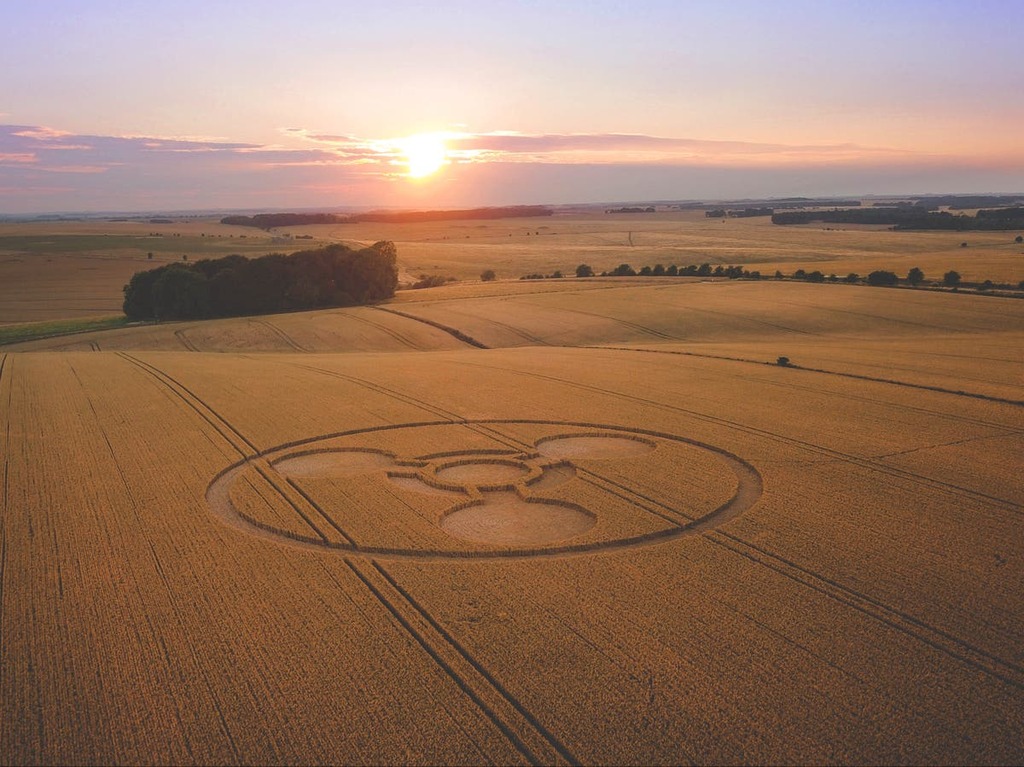 The sudden appearance of crop circles in fields across the British countryside every summer between April and September is one of our strangest seasonal spectacles.

The subject of regular media excitement, they are often dismissed as an obvious hoax orchestrated by cunning rural chancers, hoping to lure wide-eyed metropolitan tourists in order to charge them exorbitant rates of admission to witness what might, just might, be proof of an alien race seeking to make contact with intelligent life on our planet.

Pranksters like Doug Bower and Dave Chorley came to embody this image when they came forward in 1991 and sensationally claimed to have created hundreds of circles over the past 15 years by flattening down crops with wooden duckboards, measuring out their patterns with lengths of rope.

As The Smithsonian Magazine explains, when the duo’s circles first appeared, “An efflorescence of mystical and magical thinking, scientific and pseudo-scientific research, conspiracy theories and general pandemonium broke out. The patterns stamped in fields were treated as a lens through which the initiated could witness the activity of earth energies and ancient spirits, the anguish of Mother Earth in the face of impending ecological doom, and evidence of secret weapons testing and, of course, aliens.”

Mr Bower though could not help but find the success of his flying saucer hoax hilarious.

“These so-called researchers, they connected our circles with burial mounds and ancient hillforts. There’s no connection at all! It’s just that the field was good, as far as we were concerned, to have a bit of a laugh,” he told the BBC’s Countryfile with a chuckle in 1999.

But for others, known as “croppies”, such horseplay is just a distraction from a much more serious business, nothing less than compelling evidence of the paranormal in our time - the circles’ ornate geometric designs, traced like runes through rows of corn, wheat and barley, simply too large and too intricate to be explained away with knee-jerk cynicism.

In a recent BBC investigation of the phenomenon, Daniel Stables recounted a trip to Wiltshire - a county he says accounts for 80 per cent of Britain’s 30 crop circles every year, many occurring around the neolithic sites of Stonehenge and Avebury - to see one for himself.

Mr Stables can only make out “intersecting lines of trampled wheat” from ground level, the shape resembling a rifle’s crosshairs, but is swiftly disabused of the idea that the circle could be an extraterrestrial imprint when a fellow spectator, “a potbellied man in a Dark Side of the Moon T-shirt”, points out that its pattern closely resembles the logo of the nearby Barge Inn in Honeystreet, heavily implying that this particular example is man-made.

While crop circles have been seen around the world, from California to China, Indonesia and Australia, interest in Britain grew steadily from the late 1970s (Mr Bower and Mr Chorley made their first en route home from the pub in 1976, note) until it exploded in the late 80s and ran throughout the 90s into the early 2000s.

Notable examples from that time included the appearance of a mathematical fractal known as a Julia set near Stonehenge in 1996 and another in 2001 at nearby Milk Hill that is thought to be one of the largest ever at 900 foot across.

It is surely no coincidence that M Night Shyamalan’s eerie blockbuster Signs, starring Mel Gibson as a priest-turned-farmer perplexed by the appearance of the phenomenon in his Pennsylvania cornfields, appeared while this craze was at its height in 2002.

Or, for that matter, that The X-Files and its conspiracy-minded catchphrase “the truth is out there” was at its zenith in the final years of the old millennium.

But we are still seeing crop circles in 2021, with this summer’s formations including a hexagonal pattern surrounded by spirals in Avebury and a particularly splendid effort in Okeford Hill near Blandford in Dorset.

Man-made or not, the tradition crosses continents and goes back to at least 1678 in Britain, where the rediscovery of a pamphlet in a private collection in 2011 records similar strange goings on in 17th century Hertfordshire, which at the time was believed to be the work of the devil.

Thought to be the earliest written record of a crop circle and illustrated with a woodcut of Satan wielding a razor-sharp scythe, the piece describes an arrangement of cut stalks “placed… with that exactness that it would have taken up above an Age for any Man to perform... in that one night”.

A more scientific explanation was put forward in 2009 by Colin Andrews, a local government engineer whose research into the subject was bankrolled by American billionaire and UFO enthusiast Laurance Rockefeller of the famous oil dynasty.

Mr Andrews argued that while 80 per cent of those in Britain were the work of hoaxers like Mr Bower and Mr Chorley, the remaining 20 per cent were caused by fluctuations in the Earth’s natural magnetic forces, which led to crops being “electrocuted” so that they collapse.

He claimed to have built up a database of 10,000 circles spotted around the world and hired private detectives to track down hoaxers but told BBC Radio 4’s Today programme that “the other 20 per cent remain quite another thing and I think the Earth’s magnetic field is directly involved”.

“What I am working with is simply the facts,” Mr Andrews insisted. “We are measuring a difference in the magnetic field. I think we have a really significant breakthrough here.”