By Betsy Joles in Peshawar 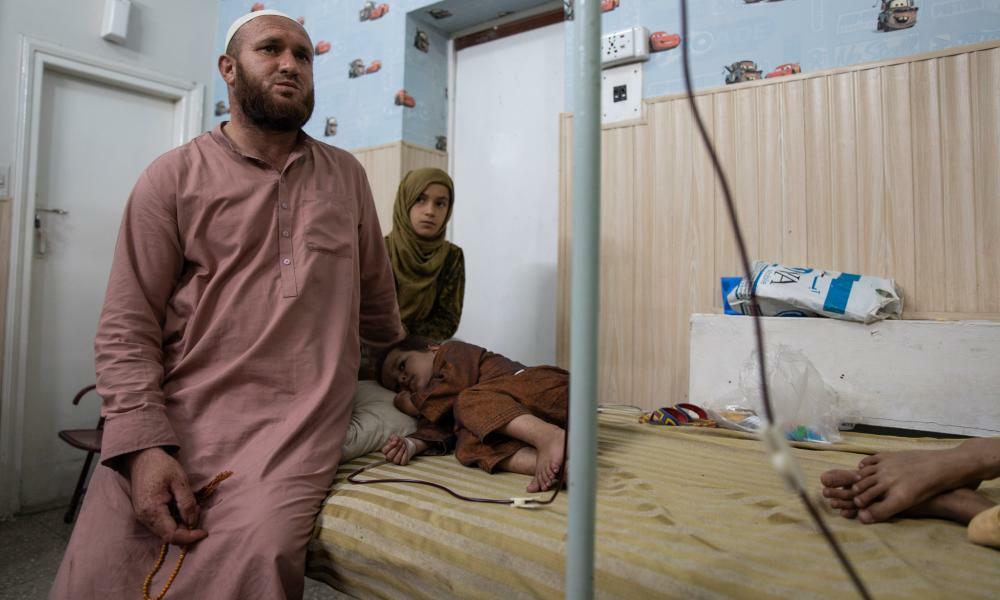 Fareed Ullah has crossed Afghanistan’s border to Pakistan 10 times for treatment for his three-year-old son, Taha, who has thalassaemia major, an inherited blood disorder. Up until the Taliban takeover in August he had never experienced a problem, but when he tried to transit via the Torkham crossing late last month, he was stopped by the Taliban from entering.

Doctors and family members of patients say conventions at the border have changed since the Taliban takeover, which has made it more difficult for Afghan patients to seek lifesaving care in Pakistan. “There is no system, still,” said Ijaz Ali Khan, the founder and chairman of Hamza Foundation, a charity organisation in Peshawar that provides treatment for thalassaemia and other blood disorders.

Afghanistan’s healthcare system, which already suffered from a shortage of specialised doctors and well-equipped facilities, has been critically wounded. Funding cuts from international donors have led to a dearth of medical supplies and equipment. Some doctors left during the early days of the Taliban rule, and others lost jobs at hospitals that could no longer afford to pay them. The head of the World Health Organization said late last month that Afghanistan’s health system was on the brink of collapse.

Before the Taliban took over, patients from Afghanistan regularly crossed into Pakistan for treatment. Peshawar, a city just over 30 miles (50 km) from the Torkham crossing, has received large numbers of Afghan patients in the past at charity hospitals that were set up in part to treat people injured in fighting across the border. Due to blood supply shortages and limited numbers of treatment centres for thalassaemia and haemophilia inside Afghanistan, people with these disorders also routinely seek care in Pakistan.

Passage to Pakistan for these patients was not previously an issue, Khan said. Hamza Foundation would issue a letter saying that the patient was coming to Pakistan to receive treatment. Since the foundation is a well-known entity in the region, border officials on both sides would let them cross with ease.

“They would allow all the patients. But now they are not allowing,” said Dr Tariq Khan, the medical director at Hamza Foundation.

When Abdul Latif Hashmi tried to cross at the Chaman-Spin Boldak crossing with his 50-year-old mother, he was stopped and questioned by Taliban members who did not believe he was taking her to the hospital in Pakistan. “They would hit us on the border,” he said of the Taliban. “They said we were going overseas, not for medical care.”

In the area where he lives in Herat, in western Afghanistan, Hashmi said there was a shortage of specialised doctors who could treat his mother, which is why he decided to take her to Pakistan for cancer treatment in a hospital in Karachi. Since last November, he had crossed from Chaman-Spin Boldak with his mother every two to three months without issue. This time, Hashmi and his mother waited at the border for six days before they paid a smuggler there to help them get across.

Pakistan is technically allowing passage for patients from Afghanistan seeking medical care, but the country has also tightened its border protocols since the Taliban takeover, which has made transit much more complicated. Torkham allows entry only to Afghans with valid travel documents. Chaman, which usually allows transit for Afghans from certain areas near the border, has also started enforcing visa rules more strictly. Both crossings have been closed intermittently over the past two months.

At Torkham, another consequence of the Taliban takeover is a delay for families waiting to receive the bodies of loved ones who died abroad. A private ambulance driver said he used to be able to bring bodies directly across the border but now must wait for clearance from the Taliban to shift the corpse to a vehicle waiting on the other side.

Fareed estimated there were 150 patients with urgent medical problems including cancer, heart problems, and thalassaemia who were also waiting in the area of the border where he stayed on the Afghan side. Among the Hamza Foundation patients who were initially blocked from crossing into Pakistan was a pregnant woman whose foetus later tested positive for thalassaemia.

Fareed was eventually able to make it across the border with the help of a Pakistani doctor who facilitated his crossing. Doctors at Hamza Foundation say most thalassaemia major patients need blood transfusions every 20-30 days. Taha has needed transfusions since he was eight months old.

After his long journey, Fareed has to decide if he should stay in Pakistan for the next few weeks between appointments or risk returning to Afghanistan between his son’s treatments.

Hamza Foundation has appealed to both the Taliban and the Pakistani government for help with other patients in this situation. “We are just appealing as humans. On a humanitarian basis, you should allow them,” Khan, the foundation’s founder said. “If we will not provide them the blood for one month, they will die. Their life is totally dependent on blood. They’re like fish. If you take the fish from the water, what will happen?”