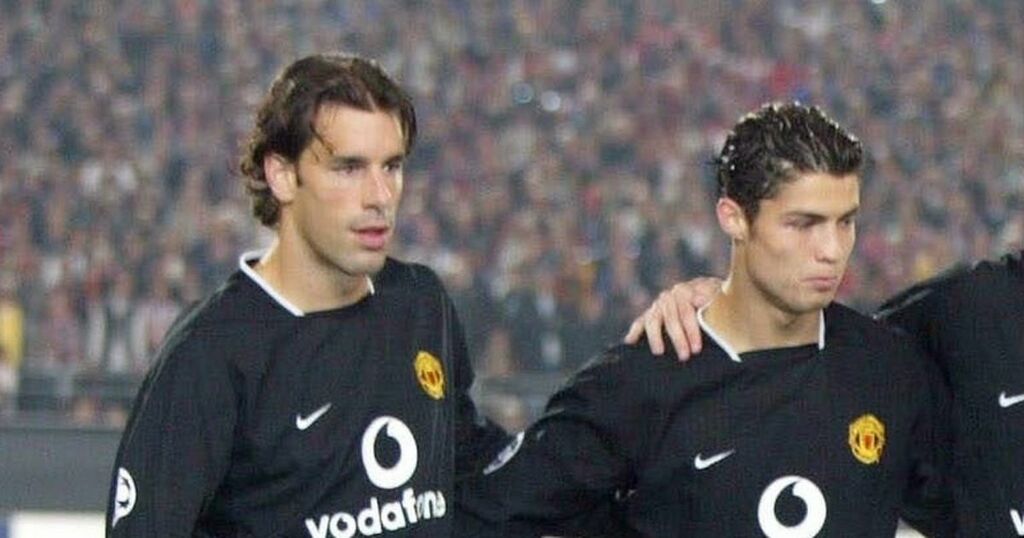 The first time Cristiano Ronaldo led Manchester United out at Old Trafford it was March 2008, he had just turned 23 and wellied in both goals against Bolton.

The second time the armband was strapped to his bulging bicep was an unhappier event. Wolves' Portuguese contingent were too canny for United last week and Ronaldo's evening was so chastening he was admonished by David de Gea for a careless header.

Ronaldo should have assumed the captaincy before then. Ralf Rangnick doubtless did not want to rock the boat by stripping Harry Maguire of the captaincy but the centre-back struggles to be viewed as a credible captain by United supporters two-and-a-half years on from his £80million transfer.

Maguire was prematurely promoted by Ole Gunnar Solskjaer and his startling form with the armband suggests it is worth considering freeing him of the responsibility, with the prospect of Maguire resuming them when he is a more consistent performer after Ronaldo has left.

Ronaldo is the oldest member of the United squad, their best player and most garlanded. He has an ego the size of a planet but prioritises the collective.

In just the filmed snippets from the 2016 European Championship, Ronaldo encouraged Joao Moutinho to take a penalty in the shootout win over Poland in the quarter-finals (which he converted) and gave a stirring address to the squad and staff following the final in Paris.

United should not have had to wait for Ronaldo to speak to rights holders to chime with supporters about what constitutes success at the club. As the Stretford Enders strive to remind the players of the standards with a banner bearing the faces of Bryan Robson, Eric Cantona and Roy Keane, Ronaldo is one of the few current players who meet them.

He should be empowered to inhabit the role Keane did when Ronaldo first joined the club as an 18-year-old. Ronaldo had the benefit of entering such an esteemed dressing room Ruud van Nistelrooy, just two years into his United career, was an authoritative figure on the Carrington training pitch.

Two days after Ronaldo turned 19, he was on the bench at Goodison Park as United squandered a 3-0 half-time against Everton. Ronaldo emerged in the 80th minute and nine minutes later, with no backlift, clipped a pinpoint cross for Van Nistelrooy to win it.

"I think he had to change his game a little bit, it wasn't all about his tricks, it was about effectiveness," Van Nistelrooy said afterwards. "And I think he picked it up well and you don't see 20 step-overs anymore. He makes one step-over and puts the ball in, which is more effective and I think he sees that now."

If a current senior United player was as excoriating in their analysis of a teammate on camera the human resources department would be involved. It is not just at football clubs that millennials and generation Zs are startled by constructive criticism, as Ronaldo stressed in his interview.

"The other people (youngsters), they don't accept that - if you criticise them," he said. "I don't say this in relation to our players but in general. I have kids, I know. Sometimes when you're a little bit harder, they do the opposite, you have to find the right balance to speak with them.

"But in my opinion, the main point is it should come from inside you. You should be proud of yourself, look in the mirror and say, listen, I gave everything. And I think all of us should do that.

"The individual is the most important thing. We are here to help when they need my help, my support, my advice, I will be the number one to help but if you don't want my help, do your job, look for yourself and do your best to help the team."

Keane, Gary Neville and Ryan Giggs were the de facto leadership group Ronaldo was introduced to and Paul Scholes' tackles were brutal enough to discourage him from diving.

The current dressing room is devoid of leaders, with an average age of 27.3. Some do not act their age. There is a lack of accountability and the last 'old guard' of players noticed the younger members of the squad did not respond well to criticism.

Luke Shaw, Jose Mourinho's whipping boy and the subject of online bullying over his frame, is a standout exception who has salvaged his United career and was their best player last season. You never hear any grumblings from Shaw and he remains grateful to be a United player.

Keane would round on a teammate for a transgression whereas Bruno Fernandes has not banked enough credits to get away with his whinging. Hardly any of his teammates have the clout to put him back in his box.