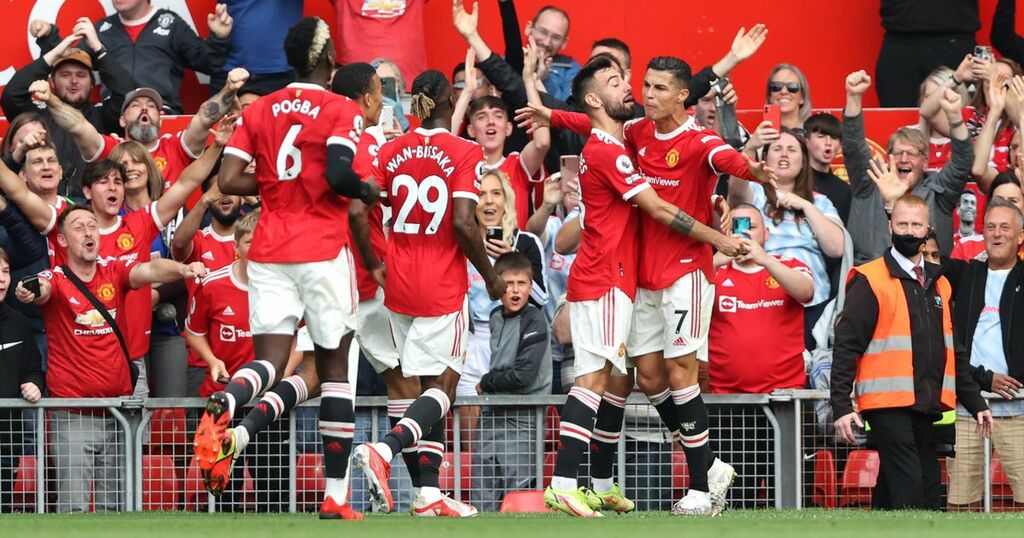 One was only a tap-in, a gift for someone who has now scored 676 goals in his club career.

It was up there with the least spectacular of those, a welcome present from Freddie Woodman.

The other went through the same hapless goalkeeper’s legs.

It was an impressive run and clean-enough left-footed hit but should have been saved.

With Hollywood royalty, in the form of Gary Oldman, amongst the great and the good in the posh seats, Cristiano Ronaldo stuck magnificently to the Second Coming script.

This is what he does. Makes history as he goes along.

And this is how he has evolved as a player. The trickery has been diluted, the ruthlessness has been intensified.

Strip away the commercial veneer and, quite simply, Manchester United have re-hired the most clinical of scorers in football.

He will bring more, much more.

Because when each of his two prosaic goals went in, it felt like the beginning of a new era. A new, old era when Old Trafford was littered with stardust. Stardust that served a purpose.

They caused enough trouble on the counter-attack to briefly threaten a draw but could not add to Javier Manquillo’s equaliser-in-vain.

But this day belonged to Ronaldo and, somewhat bizarrely and ironically, to those people who sealed the deal to bring him back.

At one point during proceedings, supporters demanded their club’s unloved owner leave, for good.

In his well-upholstered, directors’ box seat, Avram Glazer need not have felt uncomfortable.

The chants were from the Newcastle fans.

Yet four months ago, Manchester United loyalists broke into this stadium, protested on the pitch and forced the postponement of a marquee game after Glazer and his fellow executives had tried to sell this club’s soul to a rotten Super League.

A group of Manchester United supporters DID follow their counterparts with a concerted late chant of ‘We Want Glazers Out’ but, otherwise, it seems time and Ronaldo are decent healers.

Let’s face it, the acquisition of Ronaldo was a masterstroke on many levels.

It gave an initial bounce to the club’s stock market value, sold a zillion jerseys and allowed Avram to feel relaxed enough to attend a match for the first time in over two years.

And a large part of it, paid for by the sale of Dan James.

There will still be dissent towards the ownership but, essentially, the protesters have been paid off with a veteran superstar.

What Ole Gunnar Solskjaer is NOT going to get out of Ronaldo is a whole load of energetic pressing.

He might keep himself in peak shape but the treadmill of closing-down is not for an operator who is closer to 37 than 36 years of age.

But gegen-pressing is not what you buy a galactico of Ronaldo’s magnitude for.

On his two scoring occasions - before and after Manquillo’s nicely-worked goal - there was a sense of him petrifying the Newcastle defence.

He will put fear into defenders and that is a precious quality for a manager to have.

He will give this United team a better chance of winning trophies.

He will bring the theatre back to the Theatre of Dreams.

He will score goal after goal.

He will be a huge success.

And as he winked into the TV camera when striding off, do you want to know the greatest thing about Cristiano Ronaldo? Perhaps his most valuable asset?