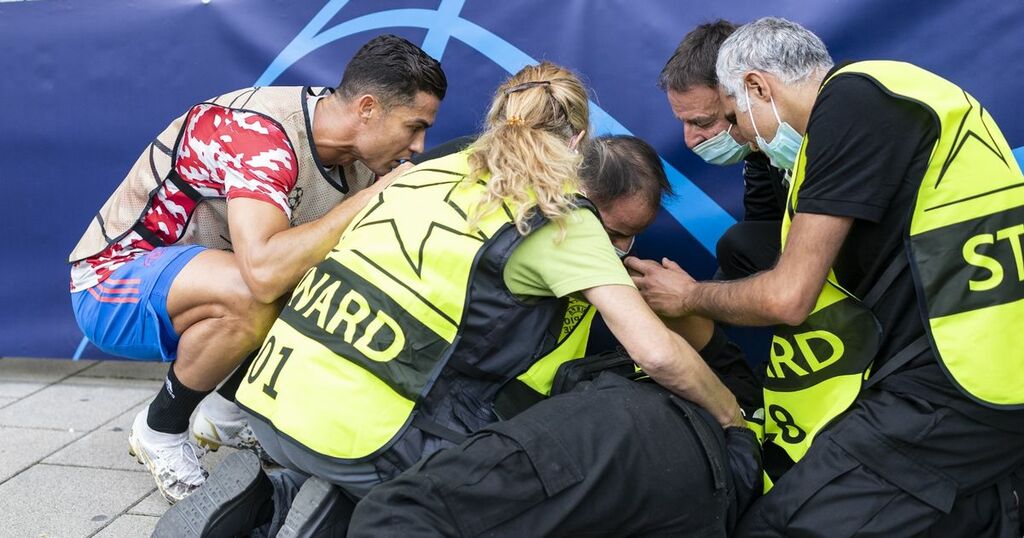 Cristiano Ronaldo jumped a barrier to help a steward after knocking them down with a wayward shot ahead of Manchester United's Champions League clash with Young Boys.

The Red Devils striker was warming up with his teammates when he fired a shot wide of its target.

The ball collided with an unsuspecting steward, knocking them to the ground.

Ronaldo reacted by jumping the barrier to check up on the woman, who was lying flat on her back and looked to be in some pain.

The steward was given a once-over from medical staff but seemed to be OK following the accident.

Ronaldo's shooting got better on Tuesday night as he opened the scoring for Manchester United in their Champions League group game with Young Boys.

The forward latched onto the end of a sensational Bruno Fernandes ball to slot home.

But Manchester United's game got more difficult when Aaron Wan-Bissaka was shown a straight red card.

The right-back was late to a challenge that left Young Boys star Christopher Martins writhing around in pain.

Diogo Dalot replaced Jadon Sancho as a result of the red card, with Ole Gunnar Solskjaer looking to settle his side down.

Solskjaer spoke of the potential threat Young Boys pose ahead of the fixture in Switzerland.

He said: "They're a high energy team, they're athletic, direct, they play attacking football.

"Maybe they're going to have to adapt to us as well. They might have to. We'll look at their strengths, players arriving late into the box. We've got our hands full as well."