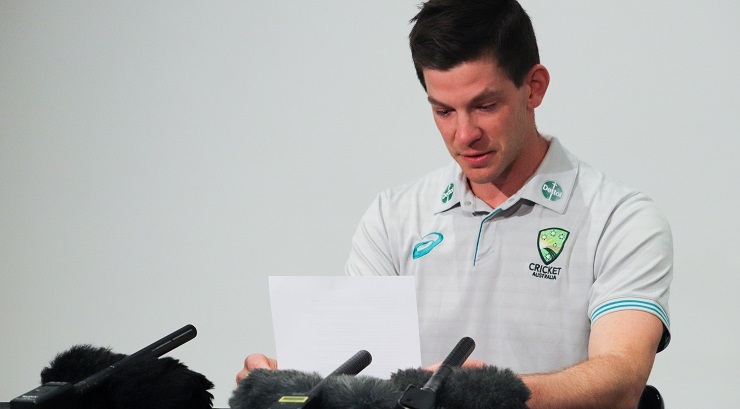 Head of Cricket Australia Richard Freudenstein needs to have a good hard look at himself in the mirror and ask a simple question: if he thought Tim Paine’s texting behaviour should disbar him as Australian cricket captain, why didn’t he disbar him? And if he comes up with an answer, he should share it with us.

Freudenstein should also tell us when he was told about Paine’s actions, what he did if he disagreed with the previous board’s position, and whether he thought the sport’s code of conduct or anything else needed adjustment. Because surely if the sexting didn’t breach the code of conduct, but he believed it deserved disbarment, the code should have been changed.

He should tell us whether he questioned the board members who were part of the decision to allow Paine to continue as captain, and on what basis they allayed his concerns that it should not be reinvestigated.

And then he should be a touch more transparent in telling us how the new captain will be chosen, without his gibberish at the weekend when we were told it would be a very thorough process — but quite quick — and there would be a range of criteria, and even a range of candidates. What does that even mean? Does Paine’s texting scandal change the criteria on who might get the gig?

This sorry saga has exposed many questions that warrant answers off the field.

The captaincy of the Australian cricket team is jokingly tagged the second highest office in the land, after the prime ministership. That carries with it responsibilities beyond the pitch. Children the nation over idolise their cricket heroes, and each weekend in summer it’s hard to find an amateur cricketer who doesn’t want to wear the baggy green. It’s a privilege. And yet Steve Smith forced families to have conversations around the dinner table about cheating. Now those same families have “dick pics” as a mealtime topic.

(As a side issue, I haven’t yet met a woman who is enamoured to receive a picture of a penis popping up on her phone.)

Freudenstein isn’t responsible for Paine’s behaviour, but he and his team need to look at their behaviour too. They knew this would be made public; there were repeated threats. And their strategy is to blame the previous board? And for Cricket Tasmania to allow the public “victim blaming” of a complainant?

“I was disappointed to see Cricket Tasmania in the first line of their statement really try and discredit the woman involved,’’ Australian netball legend Liz Ellis said yesterday. “That was a terrible example of victim blaming and they probably need to have a long hard look at themselves.”

Spot on. That change room mirror at Cricket Australia needs to be big enough to allow a few more reflections, it seems.

Paine needs to be in front of it, too. Yes, he’s an adult. Yes, it was a few words. Yes, blah, blah blah. But is that the sort of tacky and adolescent behaviour we want from the person leading our national cricket team?

I wished he’d owned this behaviour earlier. But at least when he did his self-judgment was brutal. That’s the point where our children may learn something good from this.

It’s also the reason why Smith should step back into the captaincy. It’s been three years since the ball-tampering affair shredded his career. What he did will always be wrong, but in life, what we do is important as how we do it. And Smith has worked off the field even harder than on the field to rebuild his reputation and to show the nation he can be trusted again.

He knows the cost of doing something wrong. And he’s proof that when we make a dreadful mistake we can climb out of the swamp and fix it. Nothing is forever.

Paine has to spend more time in that swamp. He knows that. But Freudenstein shouldn’t think Cricket Australia is off the hook. Ducking and weaving might work on the pitch. But off it? Cricket fans deserve some better answers than they are getting.

Should Steve Smith be given a second chance? Let us know your thoughts by writing to letters@crikey.com.au. Please include your full name if you would like to be considered for publication in Crikey’s Your Say column. We reserve the right to edit for length and clarity.