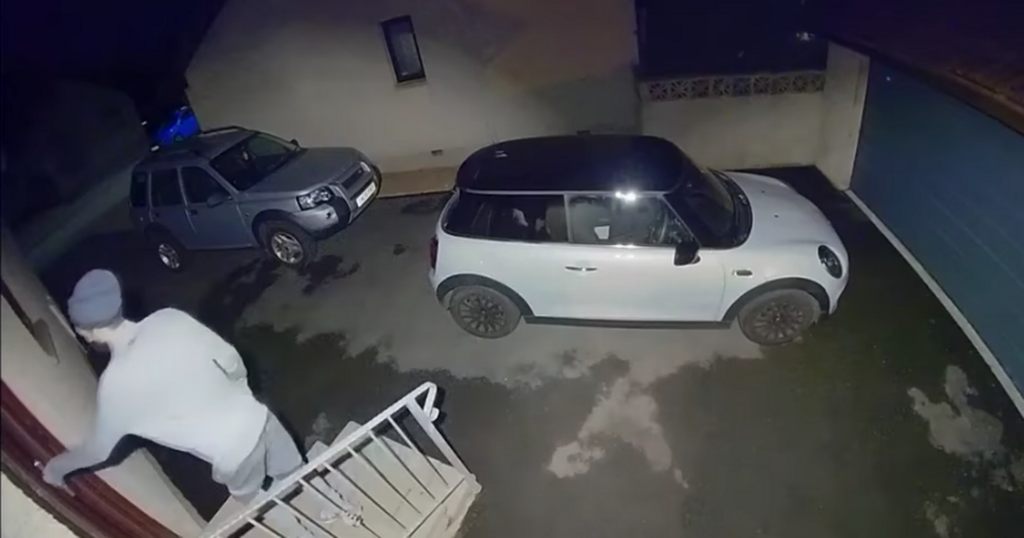 A prowler has been caught on a doorbell camera trying to enter the front door of a family home and doors of vehicles parked in the driveway.

The frightening clip shows the creeper wandering around a driveway of a property on Kinmundy Gardens in Peterhead, Aberdeenshire, at around 3am on Monday, September 13.

The man - who appears to be wearing a grey tracksuit, hat, face-covering and trainers approaches a silver Range Rover and tries to open the door handle.

He then walks over to a white Mini Cooper and tries the door handle.

After being unable to unlock the vehicles he approaches the front door of the property.

It's believed the resident of the property had her purse and ID stolen during the incident.

It followed reports of a car being broken into on Grange Park Road, one street down from Kinmundy Gardens.

The callous thief stole a child's tub of pennies saved up for the amusements and two children's CD's from a car.

The homeowner said: "Unfortunately, during the night, someone took it upon themselves to go into our car and have a good old rake around at what was inside.

"Thankfully there was no valuables - but what has made me feel sick is they have stolen my son's tub of pennies for the cadonnas, his Jo Jingle Album, and a kids gospel music album we got from my Aunt.

"We don’t have a camera unfortunately, but If anyone knows anything, I would be grateful of information.

"Actually feel sick that someone thinks it’s acceptable to do this, and take the Bairns stuff."