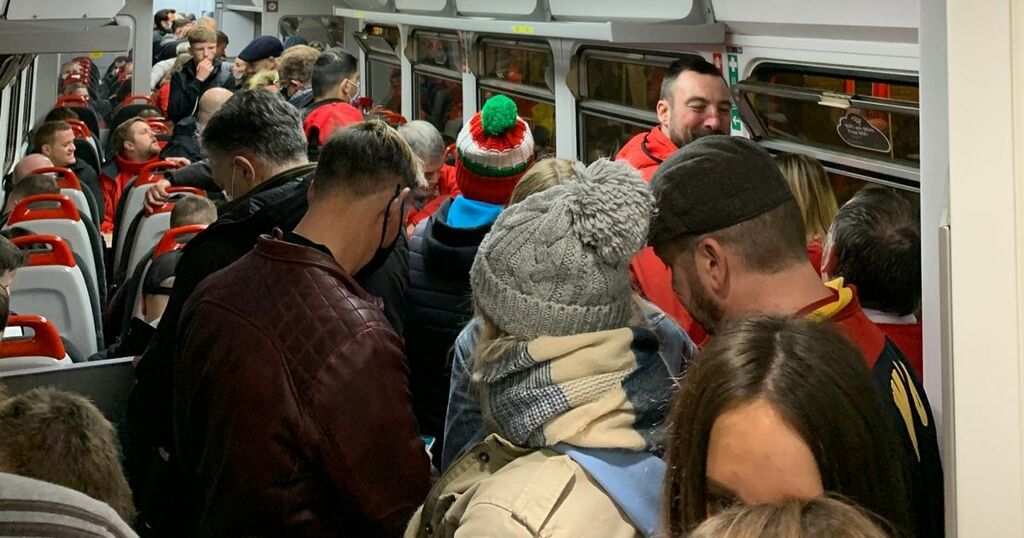 Pictures have again been shared of crammed carriages on trains from Cardiff as passengers say they do not feel safe on some Transport for Wales services.

Thousands were in Cardiff on Saturday evening to watch Wales’ autumn finale fixture against Australia which the hosts won in last-gasp fashion.

The game finished shortly after 7.30pm and thousands of fans who were there, along with thousands more watching in city centre bars, made their way to Cardiff Central train station to head home.

Go here to see how Cardiff looked after the game finished.

Photos shared by a passenger who went to the game show an overcrowded train from Cardiff to Rhymney at 8.30pm on Saturday.

The teenage passenger who attended the match claims the service was only running two carriages despite the inevitable rush for the station after the game.

He said he felt anxious and claustrophobic on the train. He added that his 12-year-old brother was visibly overwhelmed with the experience and claimed passengers were noticeably uncomfortable with many not wearing masks. It is not known however whether those without masks were medically exempt.

“[Rail operators] just seem to not have a clue,” he said. “Two carriages on after a big international in Cardiff. I can bet some services today will be empty with four carriages on a Sunday.

“With the rising cost of train fare this isn’t acceptable. If I was to go again I would try to find another way home, perhaps on a bus. For the money I paid for that service I don’t expect to be put in like cattle.”

Last weekend fears were also raised by a passenger on a service from Cardiff to Gloucester after Wales’ football match with Belarus.

A passenger on that service said: “You need a Covid pass to go to a club and a cinema but hundreds of people were crammed onto trains that I don't believe were fit for purpose.”

On this Saturday’s service the passenger added: “I felt claustrophobic because I was pressed up against the window and it was literally shoulder to shoulder.

“I expected it to be busy – I just feel it should have been organised a lot better. It was okay prior to getting in the station. There were organised queues for each service. When we got there the queues were huge to get into the station and it was about a 20-minute wait. But then we were herded in like cattle and put on a crammed train.

“In the end all that organisation beforehand was for nothing – they may as well have just let us go in anyway.

“They really need to put more carriages on because especially for people with mental health issues I’m sure it would have aggravated their concerns a lot more.

“Yesterday was scary to be honest because I was so close to people on the train."

A spokesman for Transport for Wales said: “Since we took out the pacers from the fleet, we must run trains, and train lengths, that physically fit on the network they operate, until our new stock arrives. On a normal Saturday this is sufficient capacity, but the international game has increased customer numbers by tens of thousands of people. We use all units that are available to us.

“We always advise customers to check their journeys before travelling because sometimes out timetable is subject to planned and unplanned changes and services are always extra busy on international game days and evenings. We had a number of partial and full cancellations yesterday. We fully apologise for any inconvenience caused by changes we had to put in place.

“Wearing a face covering on public transport remains the law here in Wales, unless exempt. We have clear signage around our stations and regular announcements at stations and on services. Conductors and British Transport Police also remind customers to wear a face covering, but with many services expected to be very busy, this will have an impact of conductors and the police being able to move throughout trains as they usually would. We would ask customers to take personal responsibility for ensuring they wear a face covering.”

A spokesman for the Welsh Government said after last weekend's scenes: “We urge people to follow the regulations to help keep each other safe and keep Wales open throughout the autumn and winter. This includes wearing face coverings on public transport. We expect train operators and stations to have measures in place to ensure people are able to travel safely.”

What do you think about this story? Leave your thoughts in the comments below.