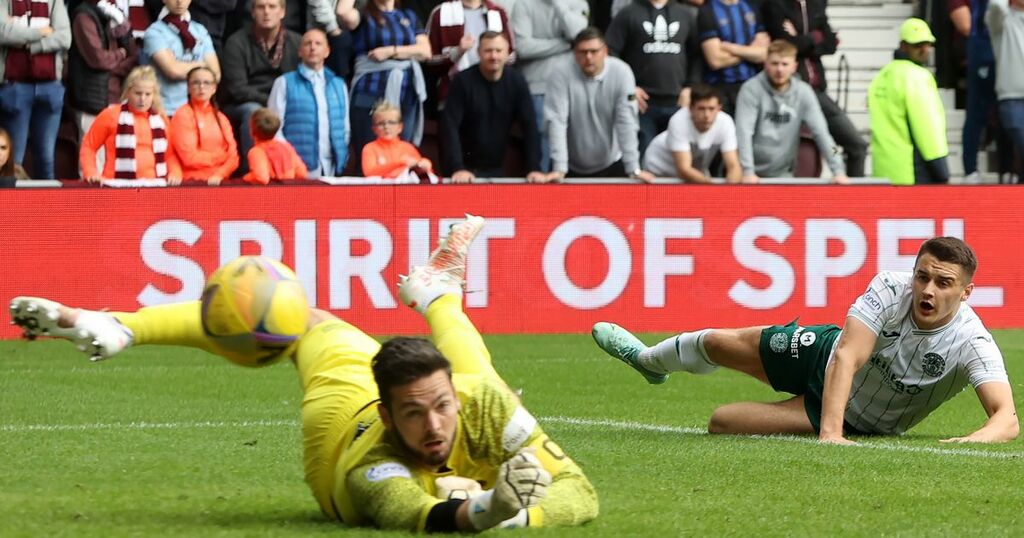 Goalkeepers aren’t normal. It’s a cliche but I’ve never doubted it with some of the characters I’ve come across between the sticks.

And I know it for a fact, having donned the gloves myself for Raith Rovers against Ayr United just a few years back.

After 90 minutes of putting my body and face in front of anything that moved I came away convinced they all must be absolute bonkers.

It was enough to send me into retirement for a wee while.

But when it comes to Hearts and Scotland No.1 Craig Gordon then I’ve got to say, the big man REALLY isn’t normal.

And I say that in the absolute best meaning of the word.

He proved it again on Sunday with a superhuman display in the Edinburgh derby.

I never played with or against Craig but he came in and trained with us at Hearts eight or nine years ago when he was on his way back from the injuries that had looked set to end his career early.

What a class act he was.

The mental strength and patience he showed to fight back to full fitness was incredible.

And watching him go about his work back then – in the gym and out on the training pitch – was a lesson in professionalism.

He’s two years older than me but you’d never think it looking at the shape and condition he’s in.

Even then, when he was only half fit, you just couldn’t get the ball past him in training.

For someone who’s had serious injuries it’s just not normal.

The saves he makes – continuing to throw his body on the line – wouldn’t be normal for 99 per cent of keepers.

Yet because it’s Craig Gordon it just becomes the norm.

Craig is everything Heart of Midlothian stands for.

He has come through the ranks, supports the club. He’s an amazing ambassador off the park for Hearts – and on it he is still a star.

He is a shining light for Scottish football and hopefully, as boss Robbie Neilson said after Sunday’s game, that will continue for a good few years yet.

No wonder Hearts are heading in the right direction with him wearing the armband.

With the squad in place, the management making the right decisions and the fans now in charge, then everyone pulling together will make Hearts a powerful club.

That was evident at Tynecastle on Sunday afternoon.

Hearts shaded the game. I thought for the first 60-70 minutes they were the better side.

Gary Mackay-Steven has drawn three big saves from Hibs keeper Matt Macey and I thought it was only a matter of time.

Fair play to Hibs though. Jack Ross has a very good side there and they could easily have won it had it not been for Craig, so overall a point apiece was probably fair.

I heard Robbie talking about Hibs celebrating with their fans while Hearts players were silent in the dressing room because they were gutted not to win.

I’ve no doubt it’s a bit of mind games, a little bit of psychology on his part.

But there’s no doubt it’s a good place to be when the team is disappointed not to have come away with the three points from a derby.

I also read Tam McManus saying Hearts only managed to draw with a weakened Hibs.

To respond to that from the good side of the city I’d say the performance – along with the wins over Celtic and Dundee United – prove Hearts are back as a top-flight force.

Robbie and sporting director Joe Savage have done a remarkable job on the recruitment side of things.

For the first time in a long while the club looks like it has direction and knows where it is going.

As a Hearts fan it’s a delight to watch.

The way they are going, I fully expect a top-four place – and hopefully third – won’t be out the question come the end of the season.

There’s real strength in every department. Soapy Souttar’s return from injury at the back has been a massive success and the backline looks solid right now.

But it’s going forward where the biggest improvements on last year have been made.

Beni Baningime impresses me more every time I watch him and what a signing the midfielder has been from Everton.

His back story, as much as the fact he is a terrific footballer, is fantastic.

I read Alan Stubbs talking about Baningime coming through at Everton when he didn’t even have a pair of boots and they had to kit him out.

To see someone who has come from a deprived background flourish is inspiring.

Speaking after the derby Beni was very humble and he is a class act.

Barrie McKay is another very good signing. It’s a good fit for the player too. I have watched him on Instagram – don’t laugh that’s how all the cool kids do it these days – and he has a personal trainer and ensured he has stayed fit since leaving Swansea.

He is just another quality addition in the front area where there’s so much competition for places.

Hearts can only be better for that and for Barrie’s arrival.