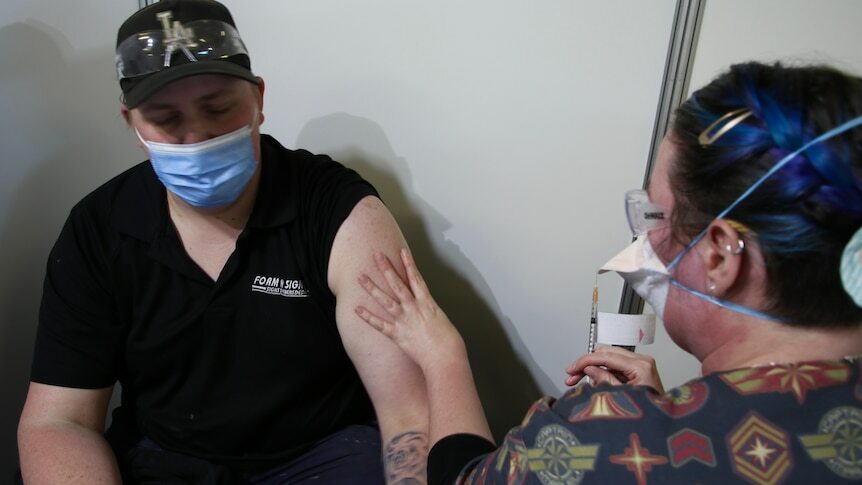 The deadline for Victoria's essential workers to receive at least one COVID-19 vaccination to work on site has passed, with employers now required to turn unvaccinated staff away.

About a million workers from dozens of industries in the state will now have to show proof they've had at least one vaccine or an appointment booked before October 22 to be allowed to continue to work on-site, unless they have a medical exemption.

The same group of workers must  have received two doses by November 26.

The Victorian government announced the mandate for workers both in metropolitan Melbourne and regional Victoria earlier this month. It is a similar ruling to those in New South Wales and the Northern Territory.

The Victorian head of peak employer association, Ai Group, Tim Piper said the deadline had created huge issues, especially for small businesses that only relied on one or two workers.

"Many Ai Group members are contacting us expressing concern that some workers are refusing to be vaccinated," he said.

"Skilled and experienced employees are at a premium and some businesses are at their wit's end trying to decide what to do.

While Victoria's broad vaccine mandate has been welcomed by the majority of essential workers, some who refuse to get the jab have lost their jobs or have been suspended without pay.

The public health directions impose an obligation on employers, rather than employees, requiring businesses to prevent staff from working away from home.

"So yeah, it's really challenging."

Since National Cabinet announced it required vaccination for aged care workers earlier this month, the Australian Nursing and Midwifery Federation (ANMF) has seen a small number of its members refuse a shot.

"We have been open and transparent with members about these directives," the union's Victorian branch assistant secretary Paul Gilbert said.

"Like any workforce we have some members who will not, under any circumstances, take up the vaccination. It is difficult to establish how many members fall into that category, but it would be in the 100s rather than 1000s.

"Given the CHO directive, these members will not be allowed to work on-site, and for many that will regrettably mean they risk losing their employment.

"Required vaccination for nursing, midwifery, and aged care work is not a new concept for ANMF members. Having up-to-date immunisations is a requirement for all student nurses and midwives before their first clinical placement."

Mr Gilbert said members had been advised about a number of unfair dismissal cases that were taken to the Fair Work Commission, where the commission found the employer's vaccination requirement to be a reasonable direction.

The Fair Work Ombudsman, which provides advice and enforces workplace laws, told the ABC it was "unable to comment on the specifics of any queries".

Ms Gaspar, a partner at Herbert Smith Freehills, said while the Chief Health Officer directions now forbade unvaccinated workers from arriving on site, "that doesn't mean that you automatically need to sack them".

In a quirk of the way the directions are issued, the current mandate is only in place for another week, but then is likely to be extended. Unlike in New South Wales, there is no set date for when the mandate might be lifted.

Because of that, Ms Gaspar said standing workers down or forcing them to take leave was within the rules while it was an interim order, but a dismissal at this stage could be deemed unfair if the employee had leave they could utilise.

For the majority of Victorians, the mandate has not been a problem.

The state is racing towards having 90 per cent of its adult population protected against COVID-19 with at least one dose of a vaccine.

The Victorian Chamber of Commerce and Industry's Paul Guerra said some of the group's members had encountered vaccine hesitancy amongst staff.

But he said it was only prevalent in a minority of Victorians.

"Fortunately, across all of the states, it looks like Victoria is the lowest about vaccine hesitancy, so we'd hope that would be a minority of people there," he said.

Deputy Premier and Education Minister James Merlino on Wednesday conceded there was "not one cohort in the community" that did not have a small minority of people who did not want to be vaccinated.

But he said when it came to teachers and schools staff, the "vast, vast majority" had already received at least one dose.

After legal advice suggested the Chief Health Officer's vaccine mandate did not technically apply to MPs, the Victorian parliament passed a bill last night to enforce the rules.

Under the bill, MPs and their staff must show proof of their vaccination status or be excluded from the building.