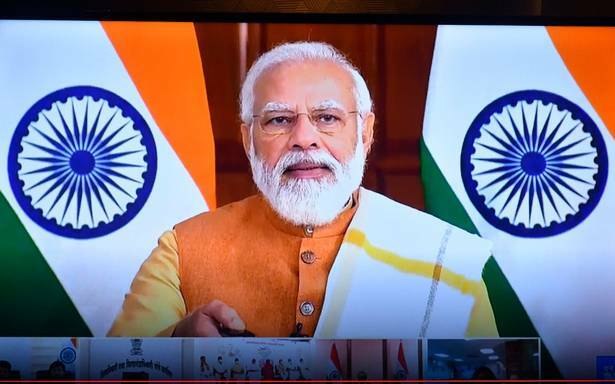 Foreseeing the dawn of the golden age of start-ups in India, Prime Minister Narendra Modi on Wednesday issued a call to the country’s youth to adopt the motto of “compete and conquer” as their guiding principle in life.

Inaugurating in virtual mode the 25th National Youth Festival hosted by the Union Territory of Puducherry, Mr. Modi said the evolution of the start-up ecosystem that had grown to over 50,000 units, about 10,000 of them initiated during six to seven months of the COVID-19 pandemic, reflected the “can-do” spirit of the youth of today. The resilience, spirit of innovation and the zest for problem-solving should be a source of inspiration for every generation, he said.

'Over 2 crore children took the jab'

The Prime Minister said the sense of social responsibility shown by youngsters in the 15-18 age group in volunteering for COVID-19 vaccination that led to a coverage in excess of 2 crore children in a short span of time, strengthened his belief that India’s youth would be at the forefront of building a vibrant nation and a better world in future.

The government had initiated several schemes focused on creating space for the youth to translate their ideas and develop their skills such as MUDRA, Start-Up India, Stand-Up India and the Atal Incubation centres, the Prime Minister said.

'Youth are drivers of development'

Drawing from the words of Sri Aurobindo, whose 150th anniversary also coincided with the NYF, that “a brave, frank, clean hearted, courageous and aspiring youth is the only foundation on which the future nation can be built,” Mr. Modi said he believed that the nation’s youth were not only a “demographic dividend” but “drivers of development” and proponents of democratic values.

Referring to his government’s recent decision to increase the legal marriage age of women to 21 years, the Prime Minister said the rationale for this was the betterment of “our daughters” and ensure that they had the space to pursue a career and become equal partners in the nation’s progress.

The Prime Minister also gave a call to the youth to espouse a “vocal for local” motto as a fitting tribute to the great sons that the country had produced.

The theme of the 25th NYF, which was shifted to virtual mode in the wake of Covid-19 surge and curtailed from a five-day programme to a two-day event, is “Saksham Yuva-Shashakt Yuva”. The launch of the event, which aims to “shape the minds of India’s youth and transform them into a united force for nation building”, was broadcast over a navigational virtual platform with various themes and components set up with a capacity to host 5 lakh concurrent users.

Over two days, several sessions will take place concurrently at four virtual conference rooms. The themes range across tech, entrepreneurship and innovation, environment, climate, sustainable development goals and growth, nation building, yoga and indigenous/ancient wisdom. A high point of the concluding day will be the broadcast of video capsules featuring indigenous sports and games, folk dance forms and sessions with Olympians and Paralympians.