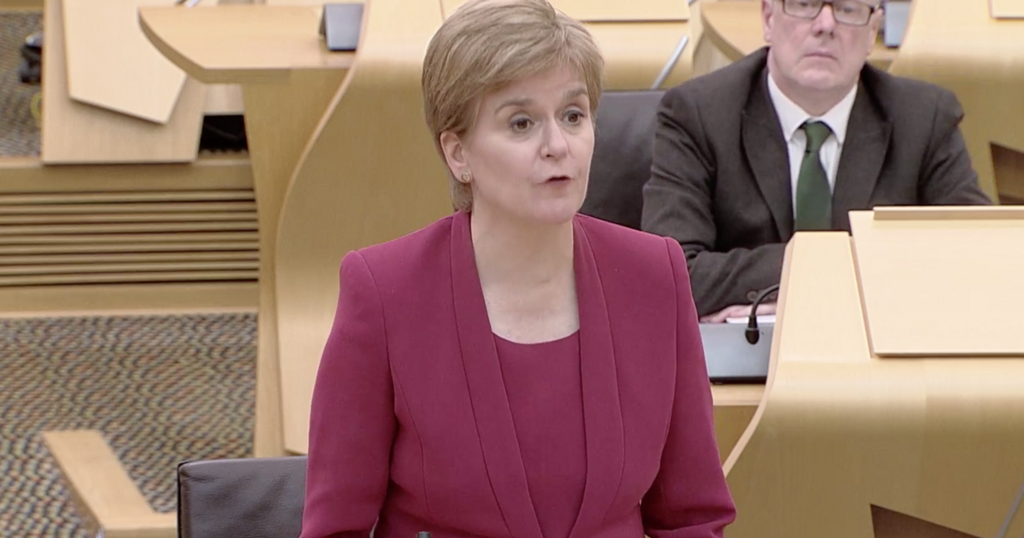 Nicola Sturgeon updated Parliament today (September 14) on the latest covid statistics, the vaccine rollout as well as up-to-date advice on the third vaccine - also referred to as the 'booster' vaccine.

News of the advice from the JCVI on the third 'booster' vaccine comes as the head of AstraZeneca has said that they may not be necessary for everyone and doing so too quickly may cause an “unnecessary burden” on the NHS.

So what else did Nicola Sturgeon say in her speech today?

Sadly, a further 21 deaths have been reported in the past 24 hours, which takes the total number of deaths registered, under the daily definition, to 8,263.

Latest on the vaccination rollout

Talking in Parliament today, the FM said: "Although the level of infection in Scotland remains too high, there are continuing signs that the recent spike in cases is slowing down. Indeed, we are now seeing early signs - not just that the rate of increase is slowing - but that cases are now actually starting to fall slightly.

"The picture varies across different age groups – but there are broadly positive signs in all of them."

The UK Government announced earlier today (September 14) that they will no longer use its 'Shielding Patient List'.

To clear up confusion, the FM said that it was important to confirm that the "Scottish Government is not following suit at this stage" and will will continue to use their equivalent list - the Highest Risk List.

"We have used this throughout the pandemic to communicate with those at highest risk and ensure they have advice. We will continue to keep it under the review, but for the moment we believe it is important to retain it."

No 'large in-person lectures' yet for Colleges and Universities

Colleges returned a few weeks ago and those attending university will now be preparing to return.

The FM said: "As a precaution at this stage, colleges and universities won’t be holding large in person lectures for now. Instead, there will be a mix of online and in-person learning – with institutions themselves deciding the level of in-person teaching that they will offer during this term."

As with other rules, and to keep in line with Scottish law, masks must be work in indoor public spaces and physical distancing will remain in place on campuses despite it being ditched in other public spaces in August.

The wearing of face coverings in schools

At the beginning of term, secondary school pupils were told that they would need to wear face coverings in class for the first six weeks of term which was subject to a review.

With those six weeks gone, and given the high levels of infection, the Advisory sub-group has said that this requirement should remain in place until the October holidays.

After this point, it will then be reviewed again then.

Nicola Sturgeon explained: "I know how unpopular this is with many pupils and I understand why. But for now, it remains a prudent and necessary precaution."

In an update to self-isolation rules in schools, the FM said that letters will be sent out "to the classmates of a pupil who has tested positive, but not to everyone in their year group."

The Scottish government hopes that by doing this, it will help to reinforce the importance of self-isolation and minimising contact whilst "minimising undue anxiety".

"All of these measures reflect our commitment to prioritising the wellbeing of children and young people - and our determination to minimise disruption to education."

It was confirmed last Wednesday (September 8) that the JCVI said despite the benefit of vaccinations for 12 to 15-year-olds outweighing the risks, it was only "marginal" and could therefore "not recommend a universal offer of vaccine to this age group on health grounds alone".

Despite last week's news, today Nicola Sturgeon said that they did "indicate that it would be appropriate for Chief Medical Officers (CMO) to consider whether any wider issues might tip the balance in the other direction."

As a result, CMOs concluded that the vaccination of this age group could "reduce disruption to education" and as a result of this combined with the original advice on the benefits from the JCVI, the vaccine offer will now be extending to all 12 to 15-year-olds with the FM stating the move was "justified".

She stated that all children within the age range will now be offered one dose of the Pfizer vaccine and the updated advice had been accepted by the Scottish Government and "broadly endorsed by the Royal College of Paediatrics and Child Health".

Parental consent of vaccinating 12 to 15-year-olds

The move to vaccinate children is one that has come under fire from many parents.

In discussing this and parental consent, the FM said that more information will be released later this week in order to make an informed decision with "balanced information to help young people and their parents make informed choices".

Scotland's First Minister also confirmed that as of September 20, drop in clinics will be open for all 12 to 15-year-olds "who have read the information and - in discussion with parents and carers - decided they wish to be vaccinated".

Parents and their children should expect letter to be sent out the week beginning September 27 inviting them to an appointment at a drop-in centre or vaccination clinic.

The FM ended with a statement saying that there will be a programme of vaccination in schools in order to ensure that anyone who hasn’t been vaccinated, and who decides that they want to be, gets a further opportunity to receive it.

The JCVI issued an update on a third 'booster' vaccine which will is being offered to people who are severely immunosuppressed or immunocompromised at the time of their first or second vaccination.

Other eligible groups - all adults over 50, all those aged 16 to 49 with underlying health conditions, adult carers, unpaid and young carers, and adult household contacts of people who are immunosuppressed - will be able to book online from October.

Latest advice states that there should be a period of at least six month between a second and third booster dose.

You can read all about the booster vaccines here.

Talking about the last of the vaccine updates, Ms Sturgeon said that the Scottish Government was now working with businesses, events organisers and sports governing bodies to finalise details of the regulations and sector-specific guidance.

You can find out more information about vaccination certificates here.

Basic mitigations to remain in place

As with all speeches, the FM urged everyone to keep wearing face coverings, use hand sanitiser, wash your hands and to keep social distancing where possible.

In addition to the basic mitigations which have been in place for almost two years, individuals are urged to take regular tests just in case they are unknowingly spready Covid with many of the cases expect to be from those who are asymptomatic

You can order them for free through the NHS inform website or collect them from a local test site or pharmacy. Of course if you test positive, or you are identified as a close contact, or if you have symptoms of the virus, you must self-isolate, and book a PCR test.