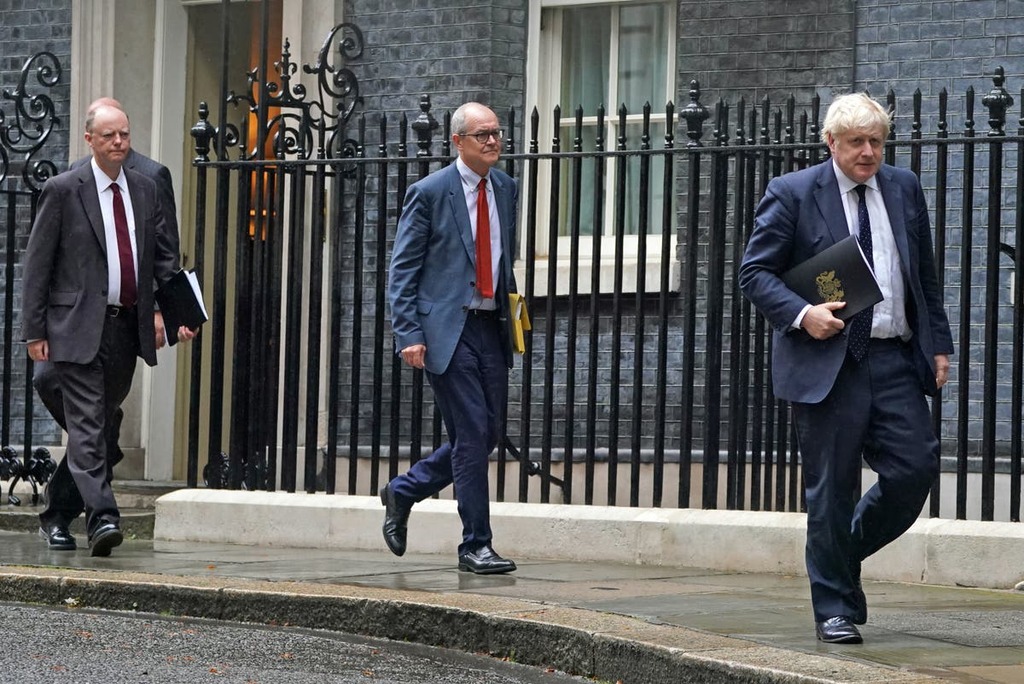 The chief medical officer said it might not require the arrival of an even more dangerous variant – one that evades vaccine immunity – to force Boris Johnson into his ‘Plan B’.

That package of reserve measures includes barring non-vaccinated people from crowded venues, the return of compulsory mask-wearing and work from home guidance.

“We have not faced a winter with the Delta variant,” Professor Whitty told a Downing Street press conference.

‘So it is possible that the combination of winter events plus the Delta variant, which is highly transmissible, could lead to a situation where, on basis of the data, ministers decide that they wanted to trigger all or some of the Plan B.”

Alongside him, the prime minister played down the prospects of fresh restrictions, insisting the current situation is encouraging and saying: “We are sticking with our strategy.”

Even if curbs were needed, they were unlikely to be introduced altogether, but would happen “in a graduated way”. Plan B had “a number of different shots in the locker,” Mr Johnson said.

Professor Whitty also went further than the prime minister who said people should “consider wearing a face covering in crowded places with people that you don’t know”.

The medical chief said it remained his firm view that masks should be worn to “protect people’ and as a “common courtesy” to others who expected them to be worn.

Mr Johnson twice said he was “confident” the Covid could be controlled without fresh restrictions, allowing the economy to stay open and turn jabs jabs jabs into jobs jobs jobs.

But Patrick Vallance, the chief scientific adviser, warned the government must react quickly if required – after criticism that previous lockdowns were delayed until it was too late.

On so-called “vaccine passports – after the type of events that the unjabbed will be denied entry to, if necessary, was set out – Mr Johnson said he believed they would not be necessary.

However, he acknowledged it might become a choice between imposing vaccine certificates and shutting down events altogether.

“Of course I understand the frustrations of people wondering whether or not they’re going to have to put this in. At the moment we’re confident that you will be able to proceed without it,” he said.

“The reason for wanting to have this option is because it’s a choice between proceeding with Covid-19 certification or, sadly, once again asking places to close, and I certainly don’t want to do that. That’s why I think it’s a good idea to keep this in reserve.”