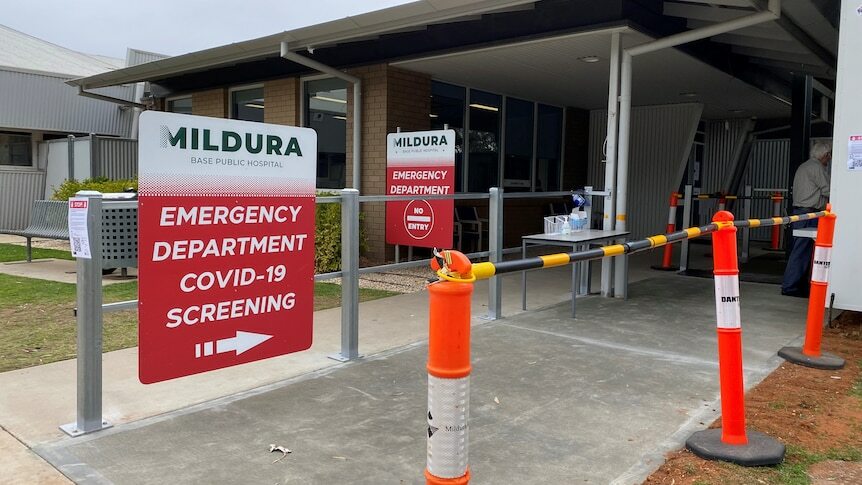 A COVID-positive patient has been flown to a Melbourne hospital from Mildura.

It comes as seven new cases of COVID-19 were recorded in Mildura on Friday, taking the total number of cases in the LGA to 16.

NSW Far West Health says there are also four cases in the nearby border town of Dareton, and one case in Trentham Cliffs.

Mildura Base Public Hospital chief executive Terry Welch said the patient flown to Melbourne on Thursday night was a "younger person" and was "very unwell" yesterday.

It was not confirmed if the person was vaccinated or if they had underlying health conditions.

"We had to put them on a ventilator and they have now gone to a metropolitan health service," Mr Welch said.

"This is not discriminating. This is extremely serious.

"It comes back to asking the community again to get vaccinated."

He encouraged people to "look after each other".

"We're seeing some people in our community now that are doing well, while other people with vulnerabilities or health concerns can very quickly become unwell.

"If you've got a friend, colleague, relative who has symptoms, urge them to get tested."

A drive-in testing clinic is in operation at the Old Aerodrome ovals in Mildura.

"There's also a laboratory van, which can process up to 100 tests a day and give results within an hour," he said.

A testing clinic open only for the region's Indigenous population was also set up on Thursday, amid health authority's concerns about a "rapidly increasing" number of cases in the Aboriginal community.

Mallee District Aboriginal Services CEO Jacki Turfry said 70 people were tested at the site on Thursday, and another 30 community members had rapid testing.

Ms Turfry said she was happy with the numbers, but that there were still some issues within the community.

"There is a bit of fear and hesitancy that people will be judgemental and treat people quite poorly if they do come forward," she said.

"But people catching COVID are not doing that on purpose, and certainly most people don't know they have it until they get tested.

"My message is still about caring, supporting and wrapping around people. We need people to get tested, and we don't want them to feel like they're going to be judged as a result."