COVID-19 variant described as 'worst one yet' emerges in South Africa, prompting UK to ban travel from six countries

By the Specialist Reporting Team's Mary Lloyd and wires 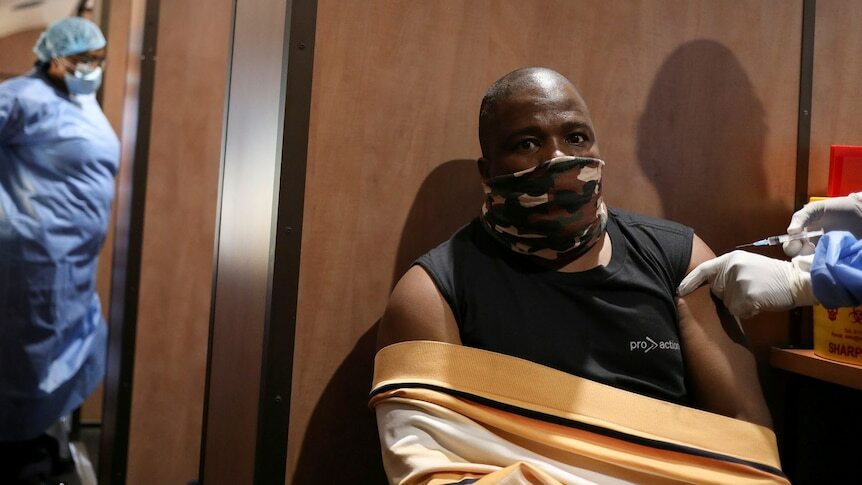 A new COVID-19 variant which appears more potent than earlier forms is behind a spike in new cases in South Africa, according to the country's health authorities.

In an impromptu address late yesterday, South Africa's Health Minister and several experts warned mutations detected in the genetic code of the new COVID-19 variant could make the virus both more transmissible and better able to evade the immune system.

South Africa's National Institute for Communicable Diseases (NICD) said it had detected 22 positive cases of the variant, currently known as B.1.1.529.

For the past few weeks, the country had been seeing a daily new case rate of several hundreds, but in the last few days it shot into the thousands and hit 2,465 yesterday.

Data collected by laboratories across the country point to the variant being mostly present in the densely populated province of Gauteng, which contains South Africa's largest city Johannesburg and administrative capital Pretoria. But the variant has also been found in other provinces.

The mutated virus has also been detected in Botswana and Hong Kong, where it was found in a traveller from South Africa.

In a statement, NICD acting executive director Adrian Puren said the goal now was to work out how the virus would behave.

"Our experts are working overtime with all the established surveillance systems to understand the new variant and what the potential implications could be," Professor Puren said.

Variant could be the 'worst one yet'

The newly identified coronavirus variant is also worrying British health officials due to its high number of mutations and rapid spread among young people.

The UK Health Security Agency (UKHSA) said B.1.1.529 had a spike protein that was dramatically different to the original coronavirus variant the vaccines were based on.

It said it had mutations that were likely to evade the immune response generated both by prior COVID-19 infection and vaccination.

It also had mutations associated with increased infectivity, the UKHSA said.

Officials characterised the variant, which has double the number of mutations as the currently dominant Delta variant, as the "worst one yet".

"And that would suggest that it may well be more transmissible and the current vaccines that we have may well be less effective."

British travellers returning from those destinations would have to quarantine, it said.

Lab studies were needed to assess the likelihood of the mutations resulting in greatly reduced vaccine efficacy, scientists said.

Officials advised the British government to act swiftly and pre-emptively in case concerns over the impact of the variant were borne out, even though it could take weeks to generate all the information needed about its characteristics.

Health Minister Greg Hunt said there would be no changes to Australia's border restrictions yet, but said health authorities were still learning about the new variant.

"If the medical advice is that we need to change [our border restrictions], we won't hesitate," he said.

"At this stage, the advice of the Chief Medical Officer … is that there's no basis for change."

Some 'good news' despite concerns

Earlier this week, South African scientists said they had detected the new COVID-19 variant in small numbers and were working to understand its potential implications.

The UKHSA said no cases of the variant had been detected in Britain and they were in contact with South African colleagues over their data.

South Africa's Health Minister, Joe Phaahlahas, said the country had seen an "exponential rise" in new infections due to the B.1.1.529 variant.

The team has 100 whole genomes of the variant and expects to have many more in the next few days.

The "very high number of mutations is a concern for predicted immune evasion and transmissibility", he said.