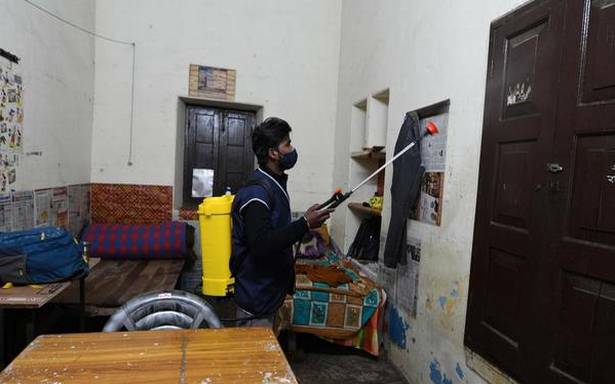 Like every wave in the past, cases fuelled by the Omicron variant of COVID-19 have initially spread only in the urban areas. However, many rural and semi-rural places recorded a sharp spike in infections in the past week.

At the start of this year, 50% of the cases were from urban centres such as Mumbai, Delhi, Chennai and Kolkata. However, the share reduced to 35% by Wednesday.

In the first five days of the year, rural and semi-rural areas recorded only 58,000 cases collectively. In the latest five days, the areas recorded 2.12 lakh infections, a 266% increase. In the same period, cases in urban and semi-urban areas increased from about 1,80,000 to 6,00,000 cases, a 233% increase, slightly lower than rural counterparts.

The figures are based on the State bulletins released until 10 p.m. on Thursday. Jharkhand and Tripura had, however, not yet released data for the day.

The Prime Minister noted that to defeat the virus, the country needs to keep its readiness ahead of every variant.

“Along with tackling Omicron, we need to start preparing for any future variant from now itself, ” he said.

He said safeguarding the economy and livelihood of common people while framing pandemic strategies is vital.

Cautioning that the Omicron variant is infecting the general public many times faster than the earlier variants, he said irrespective of variants, vaccination remains the most potent way to deal with the pandemic.

“We have to be alert, be careful, but we also have to take care that there should be no panic situation,” said the PM.

(With inputs from Rimjhim Singh and bureaus)