COVID-19 Has Slammed Bangladesh’s Hospitals. It Is Reopening Anyway.

DHAKA, Bangladesh — Nasrin Jahan woke up gasping for air. Her daughter held her in the back of a rickshaw as they motored to a nearby clinic, where she was hooked up with an oxygen cylinder. From there, an ambulance took her to one hospital, then another, looking for a bed.

“Ammu, you will be fine,” her 16-year-old daughter, Tajrin Jahan Yousha, tried to tell her, using an affectionate term for “mother.” “We are close to the hospital. They will take care of you.”

Bangladesh’s already strained health care system is buckling under the ferocity of the country’s third, and by far deadliest, wave of coronavirus infections. About 60% of its 23,000 virus-related deaths and more than half of its total infections have been recorded since the beginning of April. Its hospitals have been overrun. Only 4% of the population has been fully vaccinated.

And yet, on Wednesday, Bangladesh, a country of 165 million people, lifted much of its lockdown. Banks, shops and malls were allowed to reopen. Buses and trains will resume operating at half capacity. They follow the garment industry, a mainstay of the economy, which reopened two weeks ago.

Health experts fear that lifting restrictions will only worsen the outbreak.

“If we reopen everything despite the infection on the rise, we will suffer more terrible consequences,” said Benazir Ahmed, a public health researcher and a member of the government’s advisory group on vaccines.

Bangladesh has keenly felt the pain of shutting down its economy. Despite the country’s great strides in lifting hundreds of thousands of people out of poverty, at least 24.5 million people have been pushed into it by the pandemic, according to an April study.

Government advisers have said the country’s leaders have no choice but to reopen.

“It’s not possible for the government to keep the country locked down forever,” Mohammad Shahidullah, president of the government’s COVID-19 committee, told local news media Wednesday.

Health experts say that by reopening the country after less than three weeks, officials are effectively shifting responsibility to individuals. The government ignored their advice last month, they say, when it eased an earlier lockdown for the Islamic holiday of Eid al-Adha, leading to superspreader events that caused a surge in infections. Millions of people packed into buses, cattle markets and shopping malls, and gathered for prayers and festivities.

“The infection rate was high when the ease was announced defying experts’ warning, and we are seeing the result now,” Ahmed said.

The government of Prime Minister Sheikh Hasina has said that hospitals in the country are overrun amid “a dire need of intensive care.” Officials are renting hotels and creating makeshift hospitals to treat patients.

“We cannot increase the number of beds in our hospitals anymore,” Zahid Maleque, the health minister, said on Saturday. “The citizens now have to do their part to bring down the infection rate of COVID-19.”

In the capital, Dhaka, one of the world’s most densely populated cities, ambulances sound their sirens as they ferry patients searching for beds, oxygen and intensive care. Some hospitals have put up signs saying, “We are sorry. No beds are available.”

Kakoly Akhter, six months pregnant with her fourth child, arrived in Dhaka late last month seeking treatment for COVID-19 after the hospital in her hometown 65 miles away ran out of oxygen. Two days later, Akhter managed to get a bed at Dhaka Medical College Hospital, one of the city’s biggest COVID hospitals. Mother and baby died a few hours later.

“Had we gotten an intensive care bed early, we would not have lost her only at 34,” said Delwar Hossain, Akhter’s nephew. “She left three children behind. How will they grow up without their mother?”

In the country’s remote villages, where almost two-thirds of the population lives, doctors are scarcer and the health infrastructure is already overburdened. Bangladesh has fewer than one physician per 1,000 people, according to the World Bank, or less than one-quarter of the level of the United States or Britain.

Last month, Jannatul Ferdous Any, a woman in her early 30s, fell ill in the city of Sirajganj. At first, she just had a fever. Then she could not breathe.

Her brother, Saiful Islam, took her to Sirajganj General Hospital on July 4. Three days later, the hospital ran out of oxygen for her, he said.

A hospital 20 miles away agreed to admit her and provide oxygen, but she could not get a bed in the intensive care unit.

A week later, Any’s condition worsened in the middle of the night. She began gasping for air. Islam said the last thing she told him was to look after their parents.

“This coronavirus has taken her away from us forever,” he said. “She was the only daughter of our parents and our only sister.”

“Many of our doctors, nurses and other workers have tested positive for COVID-19,” he said. “Some of our staff have died as well. It was enough to break the morale of many.”

Dr. Shamema Akter, a doctor working in the hospital’s ICU, said she knew it was just a matter of time before a third wave would hit Bangladesh. Across the border in India, where the more infectious delta variant was first detected, the second wave overwhelmed hospitals in the spring. Bangladesh’s health ministry has said that the delta variant is responsible for more than 60% of new cases.

“According to that, we have prepared ourselves to work for long hours,” Akter said. But sometimes they get so exhausted, she said, that they have “mental breakdowns.”

Last week, when Jahan desperately needed a hospital bed, the doctors at Dhaka Medical College Hospital advised her to get a scan of her lungs. After examining the scan, a doctor told Tajrin, Jahan’s daughter, that one of her mother’s lungs had been severely infected but the hospital had no place for her.

Tajrin said she wished doctors had examined her mother more closely but that she did not blame them for the bed shortage.

“We don’t want to hold anyone responsible,” she said. “It was our fate.”

Inside the ambulance, Tajrin talked to her mother to keep her from losing consciousness. Jahan told her daughter to “forgive” her and to take care of her older twin sisters, who have mental and physical disabilities.

“You have big responsibilities,” she told her daughter. “Live along with each other.”

Minutes later, she could hear her mother’s breathing slowing. Tajrin started reciting what she could remember from the Quran until they reached the second hospital.

The staff there took Jahan to the triage room. Within 10 minutes, they told Tajrin that her mother had died.

Her aunts and uncles will look after her and her siblings, she said, but they will always feel Jahan’s absence.

“No one can take the place of a mother.” 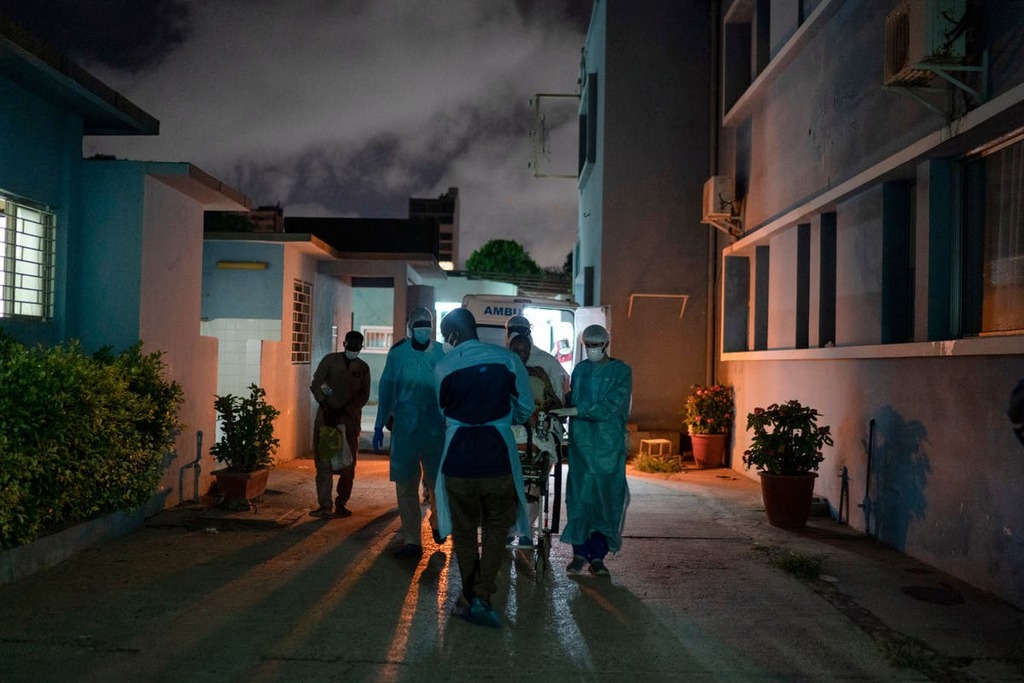 The Independent UK
One subscription that gives you access to news from hundreds of sites
Lack of hospital beds, staff add to suffering from surge of infections in Japan

For 2-1/2 harrowing hours, the 52-year-old homemaker from Chiba feared her last moments of life would be spent in an…

Sara is 15 months old, separated from her parents and sick with COVID-19. She has no idea what's happening or…