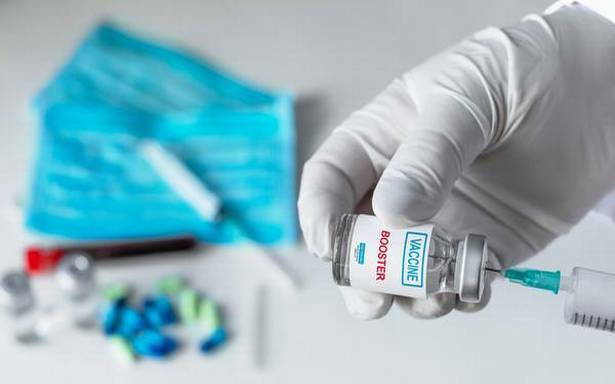 A joint study by Bharat Biotech and ICMR has provided the first evidence of the immune response of a homologous booster six months after the second dose. The randomised control trial was carried out on 184 participants belonging to the phase-2 trial arm that received 6 microgram of the vaccine for both first and second dose.

The booster dose was found to be safe. The most frequent adverse events reported were mild and transient pain and itching at the injection site.

The booster dose was given seven months (215 days) after the second dose. The primary outcome was to measure neutralising antibody titres four weeks after the booster shot.

The results have been posted on a preprint server, medRxiv. Preprints are yet to be peer-reviewed.

“The study recruited only a very small number of people above 55 years of age — 6.6% in the vaccine arm and 7.5% in the placebo arm. Since the data are not broken up by age, we can't tell how well the booster worked in the most vulnerable age group,” Dr. Shahid Jameel, Director of the Trivedi School of Biosciences at Ashoka University, says in an email. “More detailed studies and a longer term follow up are needed.”

From January 10, booters are being administered to those older than 60 years with comorbidities and to health-care and frontline workers. The reason for prioritising people above 60 years for a booster shot is because elderly people are relatively less likely to have developed sufficient antibodies after two doses.

With the booster dose study including just half-a-dozen participants over 55 years in each arm, the immune responses following a booster shot in the elderly is still not clearly known. But it was on March 23, 2021, that Bharat Biotech was permitted to conduct a booster dose trial using Covaxin by the Subject Expert Committee. At that time, only those in the phase-2 trial to test vaccine safety and immunogenicity had received the second dose more than six months ago, and hence the permission was granted to conduct the trial on these participants. The phase-2 trial that tested 6 mcg of the vaccine on 190 participants included only 10 individuals who were in the 55-65 years age group.

About three-fourths of the 184 participants still had neutralising antibody titres above baseline value at the end of six months after the second dose. “As expected, the booster dose shows an increase in neutralising antibody titres against the virus. What is even more pleasing is that the boosting effect is observed against all circulating variants (except Omicron, which was not studied),” Dr. Jameel says.

Both the placebo and the intervention arms witnessed an increase in neutralising antibody levels. The increase in antibody levels in the control arm is most likely to be due to natural infection as the booster trial was conducted during the second wave.

Though studies carried outside India have found that infection leads to higher neutralising antibody levels and longer duration of protection against infection compared with vaccination, achieving protection through vaccination is safe and advisable.

“Since even the placebo arm showed about 4-fold rise in titres (attributed to infection) and the same is expected in the vaccine arm, the actual boost by the vaccine is not about 30-fold but 30/4, which is 7.5-fold,” Dr. Jameel says.

The sevenfold increase in neutralising antibodies in the vaccine arm compared to the placebo group following a booster dose becomes clear when the values of the plaque reduction neutralisation test of the two groups are compared. However, the microneutralisation test revealed that the antibody increase in the intervention arm was less than twofold than the control arm.

“In the case of binding antibodies, the difference between the two arms is not statistically significant at the end of four weeks following the booster shot,” says Dr. Chandrakant Lahariya, physician-epidemiologist and public policy and health systems specialist.

“More than 90% of all individuals boosted with Covaxin showed neutralizing antibodies,” the release says.

“As the dominant COVID-19 variant throughout the world, Omicron poses a serious public health concern,” Dr. Mehul Suthar from Emory Vaccine Center and who led the laboratory analysis says in the release. “Data from this preliminary analysis show individuals receiving a booster dose of Covaxin have a significant immune response to both the Omicron and Delta variants. These findings suggest that a booster dose has the potential to reduce disease severity and hospitalisations.”