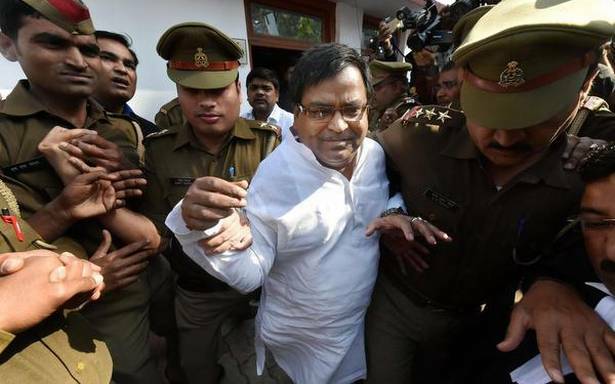 A special Prevention of Money Laundering Act (PMLA) court here has issued summons to former Uttar Pradesh Cabinet Minister Gayatri Prajapati to face trial in a money laundering case linked to possession of alleged disproportionate assets, alleging that he was the "ultimate beneficiary" of assets acquired out of the proceeds of crime.

In an order issued on Monday by the special PMLA court of sessions judge Sarvesh Kumar, Prajapati has been asked to depose before it on October 4.

The zonal office of the Enforcement Directorate (ED) had filed a charge sheet, also called the prosecution complaint under various sections of the PMLA, against Prajapati and others in April.

The agency has been probing the former legislator, who held the mining portfolio in the Samajwadi Party government led by Chief Minister Akhilesh Yadav, on money laundering charges in a case linked to alleged possession of disproportionate assets.

"There are specific allegations against accused Gayatri Prasad Prajapati that he has expended ₹2,98,25,511 more against his income from known and legal sources which is exponentially disproportionate while he was working as public servant," the court said.

“In addition, there are prima facie evidences of acquiring benami properties by him. All the cash deposits in the bank accounts of his family members and companies wherein they were directors were made on his instance," the court said.

"He was the ultimate beneficiary of the properties so acquired out of proceeds of crime. He knowingly was involved in acquisition and use and projections of proceeds of crime generated by him from his misuse of official position as a public servant," the court said in its order.

It said that a "prima facie" case is made out against Prajapati under sections of the PMLA on the basis of "allegations and material on record" brought by the ED.

Prajapati was booked early this year by the ED in this money laundering case after analysing an Uttar Pradesh Police vigilance FIR filed against him in on charges of possessing alleged disproportionate assets. He was already being probed by it in a case of illegal mining in Uttar Pradesh.

The ED's Lucknow zone joint director Rajeshwar Singh had said during the filing of the charge sheet that investigation in the case was ongoing and more attachment of benami properties are expected and supplementary charge sheets can be filed.

"He had shown substantial rental income but most of it was found to be bogus and only to inflate his income."

It alleged that the assets "standing in the name of the family members ofPrajapati, the benami holders and various companies wherein his sons are/were directors is found to be over ₹36.94 crore (approx.) which is several times over and above their total purchasing capacity."

Prajapatiis also accused of raping a woman and attempting to molest her minor daughter along with others.

He was arrested and sent to jail on March 15, 2017 and he is in judicial custody at present. Prajapati was also arrested by the ED.

Fifty-seven bank accounts having balance of ₹3.50 crore and 60 immovable properties worth ₹ 33.45 crore were also attached provisionally by the ED.