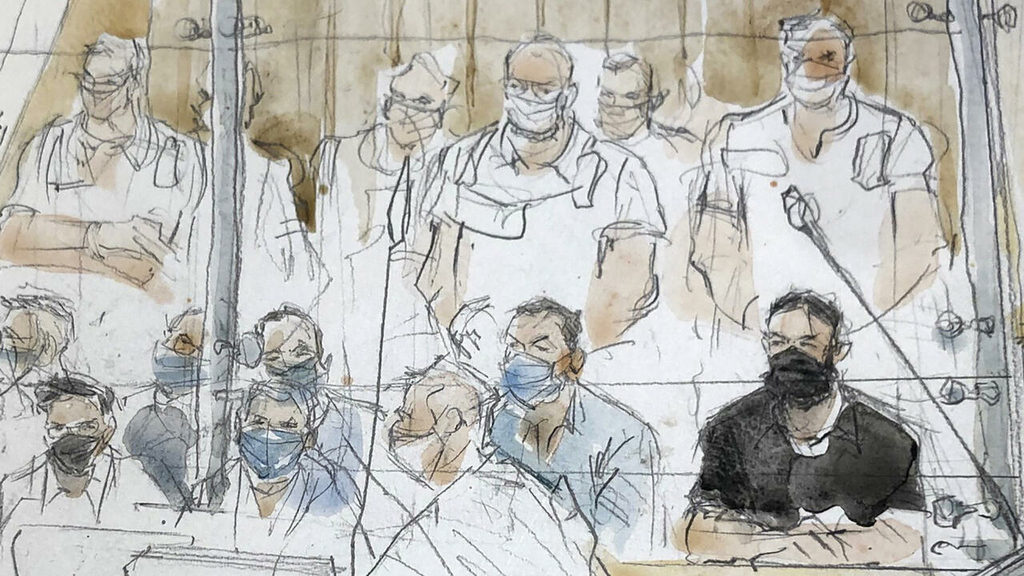 Salah Abdeslam, the only survivor of the armed jihadist squads who killed 130 people in the French capital six years ago, took the prisoners' microphone for the third time in two days in an effort to exonorate three of his co-accused.

The second day of the Paris hearing was dominated by the continuing effort to assemble a list of civil complainants.

While the court was considering the appropriate legal status of some non-human entities like the bars and venues where the attacks took place, Salah Abdeslam was granted permission to speak.

"In Molenbeek where I come from, people are generous," he told the court, referring to the quarter of Brussels in which he grew up. "If someone asks for a lift or for a place to sleep, he gets it. That's how we are.

"These three, Mohammed Amri, Hamza Attou and Ali Oulkadi, gave me a helping hand without knowing anything at all about me.

"They did nothing," he assured the judge, "they should not be here."

Amri and Oulkadi each face 20 years in jail if they are found guilty on charges of aiding a terrorist attempt. Attou could go to jail for six years for abetting a terrorist.

The president of the tribunal, Jean-Louis Périès, reminded the prisoner that there would be a time for presenting such claims, adding that now was not the moment.

"What about the people who died in Syria and Iraq?" he asked. "Will they be allowed to speak?

"Normally, one is considered innocent until after the judgement . . . even if I don't recognise your justice . . . but I have been punished before this trial even began."

When the president had made several attempts to stop the tirade, Abdeslam told him not to be selfish. "There are other people here who want to hear what I have to say."

"Monsieur Abdeslam, you have had five years to explain yourself," the judge replied, "and you have chosen not to make any declaration, which is your right. I understand that you now wish to speak, and that is good news. But now is not the moment."

The microphone was then cut, leaving Abdeslam to continue his harangue as the police supervisors inside the sealed dock attempted to calm him, indicating that he could no longer be heard in the courtroom.